When Roman's parents bought a dacha near Kiev, Ukraine, the young diplomat didn't expect the building, which was in need of renovation, to change his life. Today Greencubator - an enterprise that was co-created with his brother Andrij - is one of the most interesting Ukrainian weapons in the fight against Russia's energy hegemony.

When asked why he became interested in energy activism, 38 year old Roman Zinchenko explains simply: “I am a trained diplomat.”

Roman is the co-founder of Greencubator, a platform that connects and supports Ukrainian entrepreneurs operating in the renewable energy sector. The enterprise kicked off in 2009 and today is a very efficient operating network for green startups in Ukraine. They have organised numerous events, such as hack-a-thons and workshops, including: TeslaCamp, Hack4energy and Smart Energy Forum & Hackathon.

How did Greencubator come into being? After graduating and working a few odd jobs in the business sector and public relations, including a position as spokesperson for Vitali Klitschko (the mayor of Kiev. ed.), Roman found himself in a pickle, not knowing what to do next with his life.

Both he and his brother Andrij, who is a history professor, had their own companies which, according to Roman, “neither made a profit nor a loss.” Luckily, their parents had purchased the dacha near Kiev and the brothers came up with the idea of using renewable energy systems to cut themselves off from the local corrupt energy suppliers. It cost them a lot of time, mostly spent learning the ropes of the energy sector, and a lot of effort, but it was all worth it when, thanks to all of their hard work, the idea of Greencubator was born.

Roman explains: "Our initial idea was crazy, we had a budget of $100 and we decided to organise a meeting in the middle of nowhere. But we knew a lot of people, and had PR skills, and that helped us a lot."

However, it took time to see the effects of their initiative. Only after organising a dozen such meetings did Greencubator finally become recognisable. Though, Roman emphasises, it is not their own popularity that they're after as much as the recognition of green startups, the increased awareness of renewable energy and a change in Ukraine’s green culture.

"The Ukrainian energy sector is messed up by Russian hegemony and monopoly. The only way to change it is to educate a new generation of energy entrepreneurs," notes Roman, who also adds that a lot of young people get involved in Greencubator's work, "In the beginning, when Greencubator didn't yet exist, we were taking part in conferences that were incredibly boring. So, we've decided that we need to create something new, something fresh, to convince people that energy geeks are sexy” (This motto comes emblazoned on Greencubator's t-shirts). 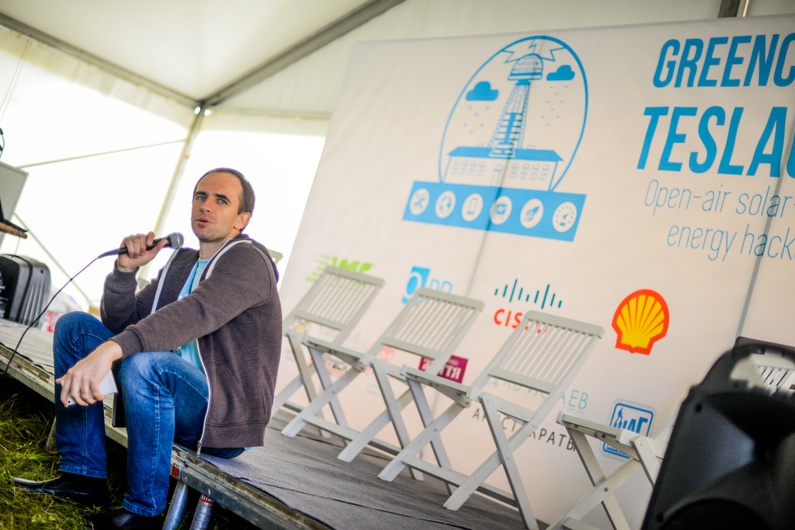 So, what plans for the future? Most importantly Greencubator's development. Secondly, sustaining the enthusiasm around the alternatives that renewable energy has to offer to the country. Thirdly, building the awareness of renewable energy though, inter alia, educational programmes and guest lecturing at universities.

For Roman the COP21 conference in Paris is an event that has positive effects for enterprises such as Greencubator. According to Zinchenko “It’s a sign that something’s happening. That some innovations are being put into place.” He also adds that the USA’s participation could possibly mean that some positive changes are on their way: “I only wish that my country could get more involved in all of this.”