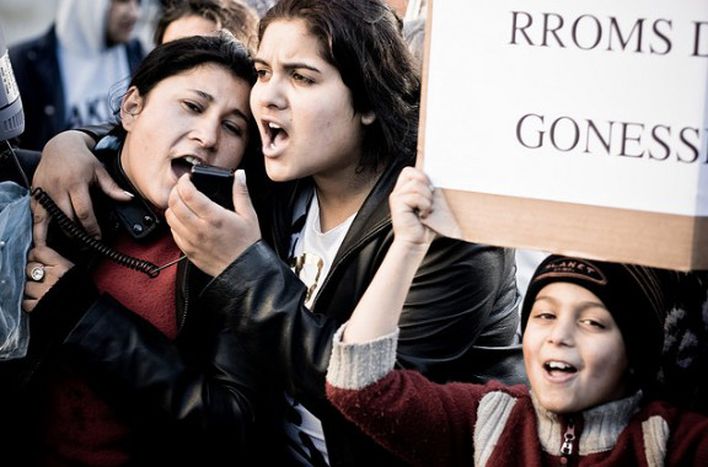 If the hardening of the policy by the French government since last summer of dismantling camps and driving the Roma population to the borders caused controversy in France, the reactions on a European level were initially rather more discreet

Lamenting the timid attitude of the European commission, MEPs have taken the initiative; on Thursday they will adopt a resolution calling for a more proactive European strategy towards the Roma population. However, as well as the French government, it is the European commission that has paid the price for its inertia which has been deemed unacceptable by a large number of MEPs who want to see the institution actively fulfil its role as ‘guardian of the treaties and fundamental principles of the EU’.

While the debate on the situation of Roma in Europe was scheduled to take place on Tuesday afternoon, the issue also came up in the morning session and to a certain extent served to overshadow the president of the commission, José Manuel Barroso, who was making his first-ever state of the union address. MEPs and parliamentary group leaders took advantage of this solemn occasion to jointly condemn the expulsion methods being undertaken by the French government and the reluctance of the commission to speak out against them.

It was Germany's Martin Schulz (S&D) who took the first shot: 'A government under political pressure cannot set out on a witch-hunt against minorities,' he said before explicitly naming and shaming the government of French president Nicolas Sarkozy. It was notable that the head of the EPP (European people's party) group, France's Joseph Daul, opted not to directly speak out against his own country’s government. Instead, he preferred to speak out about the unhappiness of numerous local administrations at the thefts of tractors in his region, the expectations of citizens to be protected and their concerns addressed at the European union level, and called for shared management of such dossiers that go beyond the question of Roma such as security and immigration.

The most poetic and the strongest in expressing his criticism was without doubt Guy Verhofstadt, the Belgian president of the ALDE (liberal and democrat alliance for Europe) group. Stating that 'what has happened in France is unacceptable', he did not spare the commission’s blushes exclaiming that it has an 'institutional duty' to 'react without concessions' when the principles that founded the EU were called in question. Daniel Cohn-Bendit also aggressively took on the commission, the 'champion of general declarations and champion of being absent' when it comes to pointing the finger at a situation contrary to the European spirit and laws. The Frenchman urged the commission president to immediately say that 'what has happened in France is in violation of European law'.

The legality of the measures undertaken by the French government is currently under investigation by the European commission, who are examining whether the measures conform to the principles contained within directive 2004/38, which governs the free movement of citizens within the Schengen area, and the European charter of fundamental rights. French immigration minister Eric Besson and secretary of state for European affairs Pierre Lellouche, were summoned to Brussels last week to provide answers.

Unsurprisingly, the criticism expressed at France’s policy was more virulent from the left half of the opuntry. In a string of strong statements against the homeland of 'human rights', the phrases 'unacceptable' and 'unworthy' were rarely absent. The home of human rights has taken advantage of the ignorance of its population to accept a U-turn on financial compensation, has manipulated its security policy for electoral gains knowing full well that it would result in the pairing of crime to immigration. In the other half of the parliamentary chamber, a certain embarrassment was palpable. Most of the conservative MEPs have opted to hide behind the commission, refusing to take a position vis-à-vis the French policy without first getting a full analysis from the commission.

The afternoon debate continued in the same stormy atmosphere with the presence of the commissioner for justice and human rights, Viviane Reding, in the chamber. Attention soon returned back to the visit of the French ministerial delegation to Brussels: the lady from Luxembourg described the assurances given by the two French ministers that the Roma were not victims of discrimination as a 'positive development'. This remark, greeted by whistles, instead gave out the impression that the commission wanted to spare Paris from punishment. The incapacity of the commission, some say its reluctance, to provide MEPs with a definite and objective statement on the legality of the deportation measures prior to the parliamentary debate only served to strengthen this feeling. Hannes Swoboda (S&D, social democrats) said he was 'shocked' and 'disappointed' by the fact the commission was satisfied with the explanations given by Paris. 'You tack, you refuse to assume your responsibility,' said the Austrian. More broadly, MEPs fear that the commission’s silence might be interpreted as a carte blanche for future evictions that would violate the law. Worse that than, they are seen as the death of European policies in the fight against xenophobia (Romania's Ioan Enciu, S&D).

The conservatives have however shown themselves to be more accommodating with the commission - they are allowing them the courtesy of employing delaying tactics since they recognise the difficulty in carrying out legal checks on a case by case basis. They are prepared to wait for the formal decision of the commission rather than engaging in vain conjectures against the state concerned. In the same manner as Germany's Manfred Weber, they say they refusing to participate in a 'political circus' and would prefer to get on with tackling the underlying problems.

On hearing those words it is clear that the raging debate in France has implications that reach far beyond the hexagon’s borders. The franco-French controversy has put the EU up against the wall. For Hélène Flautre (greens) 'it is the European project that is now in question'. This is why parliamentarians are publicly worried about the silence of the institution that is meant to act as guardian of the treaties. 'Shame on France, Shame on Europe' exclaimed Franziska Keller (greens). Ms Flautre then added: '[Ms Reding], you must show us that the charter of fundamental rights is something more than words.'