Mostar in Bosnia is known as a divided town. But contrary to the nationalist segregation that has defined the community since the war, The Mostar Rock School has been uniting its youth since 2012. The school has trained 500 people, producing some of the nation’s greatest talents and is bringing back more social cohesion than ever since the war.

It's Thursday evening in Mostar. Deserted roads and lethargic buildings, the quiet town discretely conceals the events that have taken place a few hundred metres from the centre. The only suggestion of a celebration are the sounds of a door intermittently opening and closing behind the walls of a large, well-insulated building. At the back of the room, amidst swirls of cigarette smoke and flashing spotlights, a group of musicians play for a small crowd. With endless enthusiasm, four teenage musicians play indie rock songs, bow to the crowd, and hand the stage over to the next act. This is the Mostar Rock School, the school that wants to eradicate nationalism.

To truly understand why young people are so infatuated with this unusual Bosnian venue, its important to take a step back in time. Twenty-five years ago, in what was previously Yugoslavia, Mostar lay between the Eastern and Western parts of the country and is still considered one of the most multicultural towns in Europe. With as many Muslims as Croatian Catholics or Orthodox Serbs, roughly 60% of Mostar marriages are mixed ones. The 1992 Bosnian war explains this phenomenon: while nearly all Orthodox people escaped the region to join the Serbian zones, Bosnian Muslims and Croatian Catholics clashed violently on either side of the frontline that divided the town. With the signing of the Dayton Peace Agreements in 1995, the Catholic and Muslim populations migrated from one area of the town to another and the famous point connecting the East with the West was nothing more than a debris of bricks brought in by the current.

Twenty years later, the bridge in Mostar still spans the Neretva River, re-built after the war by UNESCO. The former battlefront, which has now become the city’s main road, boasts ancient walls pitted with holes that allow wind and ghosts to pass through. Since the end of the war, Croatian Catholics and Bosnian Muslims have lived separate lives, sending their children to separate schools, attending separate hospitals, bars and sports centres. The youth of today was born after the war, but with the combination of what is aired on television and nationalist posters pasted on every street corner, it is difficult to forget the divide. To this day, the town has been severed in two, limiting the relations of its inhabitants with their neighbours. 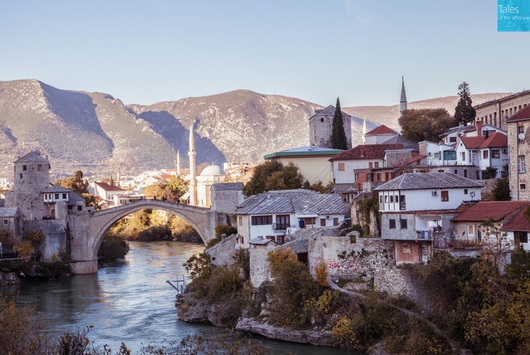 Orhan Maslo, founder of the Mostar Rock School, was only 17 when the Bosnian war ended. Joining the Bosnian defence army at the age of 14, he was one of the youngest soldiers in the country. The arrival of several international cultural organisations in post-conflict Mostar allowed him to discover his passion for music, with a particular fondness for percussion instruments. At the age of 28 he joined Dubioza, a Yugoslav rock band, which marked the beginning of his international music career. “We were constantly on the move, traveling from one country to the next. When I was on stage, I was happy. But during the long bus rides, I often found myself yearning for Mostar. I felt the need to go back and do something for my country,” he expresses. Orhan ended up leaving the band and returning to Bosnia in order to open an intercultural music school. In June of 2012, he got his first group of protégés (eight young male and female musicians) together for a bus trip to Skopje for one soul purpose: reunion. “At first there was a cold and tense atmosphere. Muslims sat the front of the bus, Catholics at the back. I sat in the middle, telling stories about my experiences on tour. The conversation got lighter, and by the time the coach had reached its first stop, things were different.”

A few days later the troop returned to Mostar, changed by their inspiring week of music. Everyone was buzzing about the Mostar Rock School. When nine extra places opened in autumn, the school received 90 applicants. Today, the school accepts 100 students each year from Mostar and other neighbouring towns. 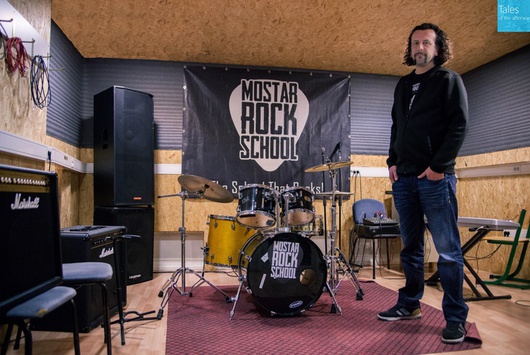 “Each school year is divided into five cycles,” Orhan explains. “Before a new cycle, the groups are separated and re-grouped, so that everyone gets to meet and play music together.” Ethnic parity now depends on an individual’s musical taste. Every summer, the school organises performances and camps in 18 towns around the country. But this isn’t the end of the line for Orhan Maslo; his next project is to create a mobile Rock School along with regular musical workshops around Mostar.

Although some young people find their place in this school of rock, which is like a second home to them, many of their families and friends have a hard time understanding why. “In the classroom, some of my friends have a hard time understanding what I do there, why I am mixing with Muslims,” a student explains. Their families have suffered during the war, and this leads to strong feelings of resentment. Some students stop attending the school altogether because of the pressure at home. “When the pressure of their surroundings gets to be too much, some students stop coming in summer, and sometimes for an entire year,” Orhan confirms. “Others end up coming back. From time to time I reassure the parents and explain to them that nothing will happen to their child on the other side of town.” 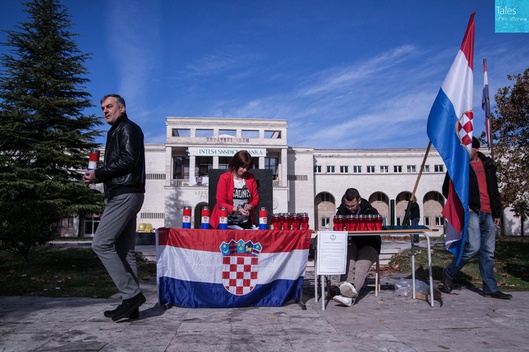 All students’ families are required to attend the school concerts. This results in a strange chemistry between the Bosnian Muslims and Croatian Catholics who have come to support their offspring, creating a vibrant atmosphere. For a moment, it seems like everything has gone back to what it was before the war. But Bosnia is far from healing its wounds, and is still haunted by the ethnic genocides of the 90’s. Current nationalists are still burying the past, and it will take several decades for the country to overcome the divisions that are integrated in many communities. But the Mostar Rock School acts as a beacon of success, reminding the youth that overcoming these divisions is possible.

Do you want to support the Mostar Rock School? Click here!

From North Irelands to the Balkans, find our post-war chronicles on the Tales of the Afterwar page.