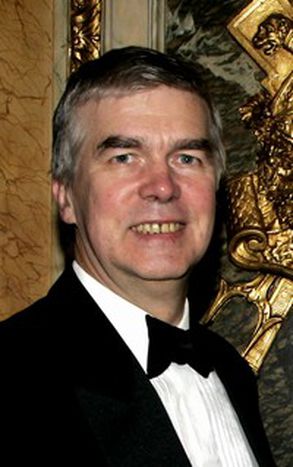 Robert Cooper, head of external affairs for the EU, is a British diplomat who’s proud of his Brussels job. An advocate of ‘postmodern imperialism’, this controversial figure is far from being a grey bureaucrat.

Just a few minutes late, Mr Cooper rushes in. One hand dragging his suitcase on wheels behind him, the other holding a newspaper. This snapshot nicely encapsulates the hectic lifestyle of a high-ranking Brussels civil servant. I politely ask him if he’s had a busy week. A self-mocking smile emerged. “I have the feeling that there is an EU directive that says we are not allowed to work any more than 48 hours per week. This week I managed that by Wednesday.”

It is hardly surprising that Mr Cooper has to invest so many working hours in his occupation. Being Director General of External Economic Relations, Common Foreign and Security Policy of the EU can’t be easy - especially over the past year or so which has seen deteriorating trade relations with China, friction over the European Constitution and strained relationships with potential EU member states, to name but a few of the problems that must be floating through Mr Cooper’s head. The British diplomat affirms these difficulties, but plays down his importance. “The title is ridiculous. I work for the Council and Javier Solana in trying to help Europe have a foreign policy.”

His modesty belies the fact that he is one of the UK’s most eminent people in the domain of International Relations. The Observer newspaper describes him as “Tony Blair’s foreign policy guru” and he is on the frontline both in the theoretical construction and political implementation of EU international policies. Recent publications of his include the book The Breaking of Nations, in which he argues for a renewed sense of global internationalism.

Mr Cooper’s passion for the European project sometimes makes me feel like a Eurosceptic interrogator, trying to crack down on the intrinsic rottenness of Brussels. He totally dismisses the words ‘bureaucratic mess’ when used to refer to the European institutions, but he does identify other issues that Europe faces. “I agree that there are problems. There is a small problem and a big problem. The small problem is the way in which we are organised in Brussels: the Council and the Commission. But there is a big problem; namely that it is difficult to organise politics on multinational basis. Our politics remain essentially national. I feel this is one of the greatest political problems for the 21st century.” Can the Brit envision any solutions to this acute political dilemma? “Well, you have to remember that in the 18th century nobody could imagine democracy except in a city. Representative democracy was invented in the 18th and 19th Century. Now we have to try and invent multinational democracy, which will not be exactly like national democracy.”

It is clear, however, that Mr Cooper doesn’t adhere to pessimism when looking in the crystal ball of Europe’s future. The EU may not develop into the world’s next superpower, but it will be a shining example for other nations. “I don’t think Europe is going to run the world, but there is a possibility that the example of what has been done in Europe could be copied somewhere else in the world. Many places would like to be like Europe. Look at Mercosur in Latin America and the African Union.”

So, what is this secret recipe of success that Europe has to offer the rest of the world? According to Mr Cooper, the continent’s comparative advantage lies in its state of peace. “Africa is full of wars, China has tensions on its borders and the US has military bases all over the world. The Middle East is already in trouble and could blow up at any minute. We’re at peace and that’s good for everybody. People forget this, but on an average day in World War Two, 17,000 people were killed - and that lasted for six years. Being at peace is a good thing.”

It is thanks to this peaceful coexistence that Europe can finally be governed by law, and not by force, according to the EU diplomat. “Law is the fundamental value of Europe. It alone can achieve a decent life for people. In history first we created the law of states – now we are building amongst states. In the EU this works. The EU model may or may not work for other countries. I do realise that we’re all different. Europe has a distinct history and culture and can’t just dump this on the rest of the world. But we can still learn something from each other.”

Indeed there are a great many things that other countries can learn from Europe, according to Mr Cooper. As he wrote in The Observer, “the postmodern EU offers a vision of cooperative empire, a common liberty and a common security (…) without the ethnic exclusiveness that is the hallmark of the nation state - inappropriate in an era without borders.” It is therefore hardly surprising that Mr Cooper finds his new working environment extremely stimulating. “I worked in the British foreign office for a long time, which was very agreeable. But strangely I find that the people I work with now [at the EU] are in a sense more patriotic. You feel a certain commitment to Europe, they know why they’re here – and I like that. People in Brussels are working for something which has brought peace and prosperity, not just to Western Europe but also to Central Europe. I am proud of that.”