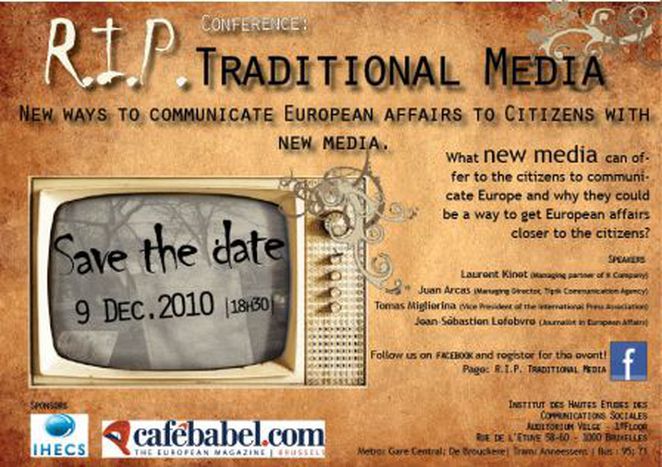 The development of new media represents a great opportunity to change the way we communicate about Europe.

Despite their influence, traditional medias often fail to inform properly about European issues, leading to a general desinformation, or even mistrust toward the EU institutions.

The Web 2.0 generation are Internet users sharing information, knowledge and creativity, but also interacting in real time. Blogs, Facebook, Twitter, You Tube and Flickr are just the emerged part of the iceberg of new media impact on information.

For communication professionals, all of those tools changed their own communication strategy. On the European level, citizens, public figures and institutions are embracing the movement.

Students of CAE Master of IHECS organises a debate to share ideas and experiences of new media technologies and strategies, where communication professionals and journalists will discuss the use of new media tools in their work and in its impact in the way they communicate about Europe.

The debate will be followed by a drink!!

A debate organised by the student of CAE, in partnership with Cafebabel Brussels, IHECS and European Commission Representation in Belgium.