Riots in Latvia: the dream of a fast buck is over

During Latvia’s economic miracle period many people lived beyond their means. Now it is payback time. 14 January saw the fraught situation in the country escalate. A mass demonstration against the centre-right government ended in violent rioting; 'everything is not ok'

Latvian finance minister Atis Slakteris looks set to go down as the most infamous MP in the country’s history. In autumn 2008, when Latvia stood on the brink of national bankruptcy, he confidently declared in an interview: 'Everything is OK.' This inflammatory statement has since spread like wildfire online, meeting with enormous incomprehension. The situation in the labour market is becoming more precarious by the minute.

Zane Licite, part of the president’s media team, reacts calmly to the question of whether 'everything is OK,' explaining soberly that as long as there is enough money, she is happy. Yet it is currently difficult to predict how long the money will last. Zane is among the youngest victims of the state reform package. Like nearly one in ten of her fellow civil servants, she was made redundant without notice by the government’s reforms. In an attempt to further reduce the state’s wage burden, the government cut the salaries of civil servants earning more than 480 euros (£451) gross per month by 15 percent and abolished bonuses. The situation in the labour market is becoming more precarious by the minute. Meanwhile fear is spreading that the state will soon run out of the investment necessary to pay out employment benefits. 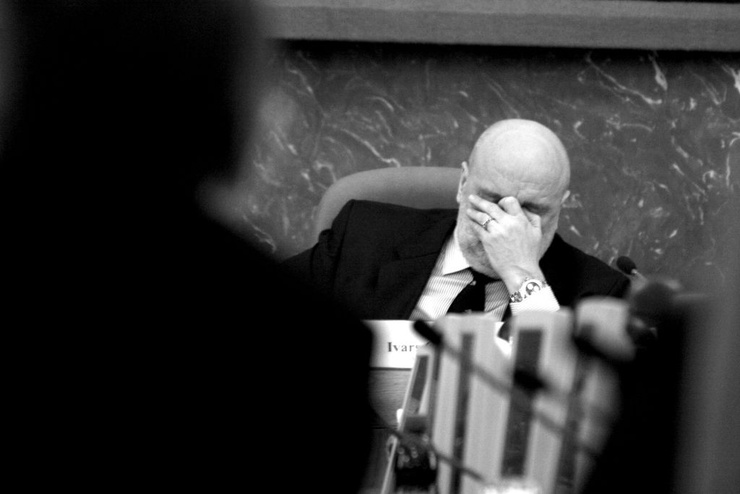 Now political parties and unions are calling for mass protest demonstrations. The mood among the population is the worst since the restoration of independence, a fact all too familiar to the manager of the 'Kapucino Bar' coffee shop on the edge of Riga’s old town. She recently posted a job vacancy on the internet. After half an hour and countless phone calls, she exhaustedly withdrew the advert. She could hardly cope with the amount of interest; she had not expected it. After all, it is not long at all since many Latvian businesses were threatened with closure because they were unable to find any qualified staff.

Latvia now finds itself not only in an economic and financial crisis, but also in a leadership crisis, says former Latvian foreign minister and opposition member Artis Pabriks. He is not interested in the 'everything is OK' method of glossing things over. He accuses the government of having ignored the international community’s numerous warnings about the consequences of an over-stretched economy in favour of populist policies.

The government has been ignorant

Finance minister Atis Slakteris is happy to attribute problems at home to the difficulties in the global market, and considers the worldwide financial crisis the cause of Latvia’s problems. But the opposition, along with intellectuals and unions, can see through Slakteris’s attempts to point the finger at outside influences and accuse the government of ignorance in the face of the country’s real problems.

One of the main causes is wage inflation. During the years of growth, particularly since 2001, it has reached gigantic proportions. Latvia’s entry into the EU in 2004 provided a further hefty push. This was compounded by massive public consumption, funded by credit. The resulting explosion in prices and wages upset the balance between performance and productivity. The financial and housing sectors collapsed. Immediately afterwards, the country slid into deep economic recession.

In autumn 2008, the International Monetary Fund (IMF) representatives of the European Union and the Scandinavian nations worked out a joint rescue plan to save Latvia from bankruptcy. 7.5 billion euros (£7.05 billion) were prescribed in emergency aid to secure the liquidity of the state and its financial sector. Under the plan, Latvia was even set homework – but this was not done the way the financial backers expected. Shortly after the multi-billion euro aid package was announced, the minister for cultural opportunities, Helena Demakova, signed a nine million pound contract with an architect’s office for the construction of a concert hall. Like many of her peers, she chased the dream of a fast buck. Almost any means seemed acceptable in order to achieve this.

Generation of young families built up mountains of consumer debt

The Latvian people are now bracing themselves for hard times. Signe K is one of those finding the situation frustrating. She has spent months searching the internet desperately for a job. The 25-year-old broke off her studies a few years ago to set up her own business. At that time the Latvian economy was developing at record speed and, like many of her peers, she chased the dream of a fast buck. Almost any means seemed acceptable in order to achieve this. However, one day the police came knocking, searched her company premises and confiscated files. Criminals had used her business for money laundering. Signe had suspected that not everything was being done in the correct way, but the large sums of pocket money interested her more. Today the young mother lives with her one-year-old daughter in a shelter for girls and young women in the Riga suburb of Agenskalns. The pair have to survive on around 50 euros (£47) of social benefit per month. The same dilemma is facing a whole generation of young families who, in the years of plenty, built up mountains of consumer debt.

Membership of the EU, the linking of the Baltic and Scandinavian financial markets and the swift help of the IMF have all kept Latvia from a worse catastrophe for the time being. The aid package has afforded the government room for manoeuvre, but it is not an answer to the state of emergency in the country – and certainly not to the political crisis.

The author of this article, Thorsten Chr. Pohlmann, is a member of the German writer correspondents’ network n-ost, based in Berlin