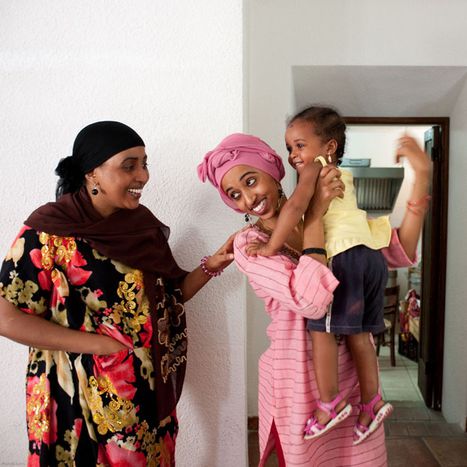 Riace, Calabria, where immigrants are welcome

Until ten years ago Riace was one of the many Calabrian villages destined to disappear due to high emigration rates. Today it is one of the most famous towns in Europe, repopulated by immigrants. A closer look into this huge scale, real life social experiment proves right those who believe immigrants are an asset to Italian and European society

Even back in 1998, when 200 refugees from Kurdistan disembarked on the shores of Riace, immigrants were being welcomed by the residents of the town. The young founders of the 'city of the future' (Città Futura) association (dedicated to Don Giuseppe Puglisi, the Sicilian priest who was killed by the mafia in 2003) decided to help immigrants. Amongst the founders is Domenico Lucano, the current mayor of the region. They contacted owners of old abandoned houses who no longer lived in the area and in exchange for small restoration works they asked to be able to rent the houses out to refugees.

Riace thus became an alternative to immigration detention centres , also known as 'pseudo-ethnic jails'. The effectiveness of these centres is debatable considering the costs and methods of running them; each ‘guest’ costs a centre 60 to 70 euros per day. The basic idea of the Riace programmes is to give immigrants a home and a job, reducing the costs of supporting the refugees (only 20 euros per day) and to improve the local economy. At present three such programmes exist in Riace; PSASR (protection system for asylum seekers and refugees), non accompanied minors and North Africa emergency. 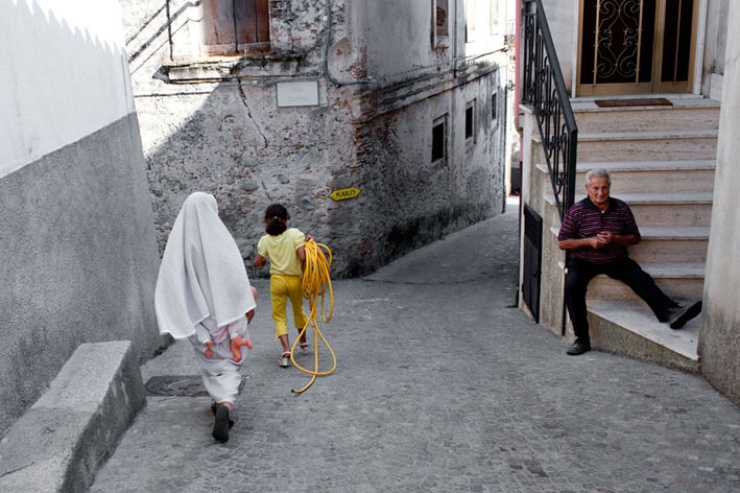 The fundamental idea of 'Riace Village', other than preserving old abandoned houses, is to preserve the region’s traditions and folklore. For this purpose a weaving mill was set up, thanks to which the ancient trade of broom-hair production was brought back to life. Other workshops for various trades followed including ceramics, glass work, embroidery, chocolate making and even carpentry. These workshops help immigrants like Abeba, a young Ethiopian refugee, find jobs. After the PSASR programme she was offered a job as an interpreter. “I’ve been here since 2007.' she says. 'I translate Arabic, Tigrinya and Amharic for people who come here and can’t speak Italian. I like it here.' 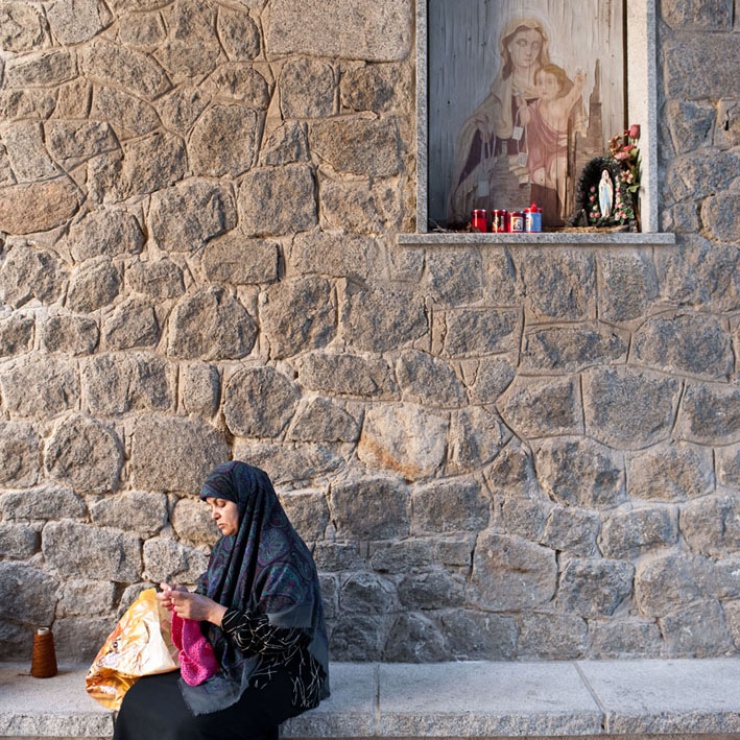 Helem is another example, an Eritrean girl who was eight months pregnant when she reached the Calabrian cost. She once only hoped to survive; now she works in an embroidery workshop and is able to support her daughter. Issa from Afghanistan has lived in Italy for a decade. She is also a refugee, on the run from the Taliban. Now a true local, she works in a ceramic factory. 'I arrived from Turkey by boat,' she explains. 'At first I did embroidery work, then I made orange jam and did olive picking.' She enjoys her work - it shows when we see the results - and she likes living in Italy. She speaks nostalgically of Afghanistan however and the family she left behind. 'If only we weren’t at war,' she sighs.

Today around 220 immigrants live alongside the 1, 600 original residents of the region. Thanks to the houses run by 'city of the future' there are 60 beds to accommodate new immigrants and a centre for housing minors, plus houses reserved for renting to tourists and the family members of immigrants who, after the projects, decide to stay on in Riace. 'Workshops, various activities, work bursaries, contributions towards rent…we do what we can to ensure that people are not put out on the streets once the programme is finished,' explains Caterina, an agent from the association. 'In the end there is a positive impact on the local economy; the owners of the houses receive rent, the immigrants buy things here and we agents have a job thanks to them.' 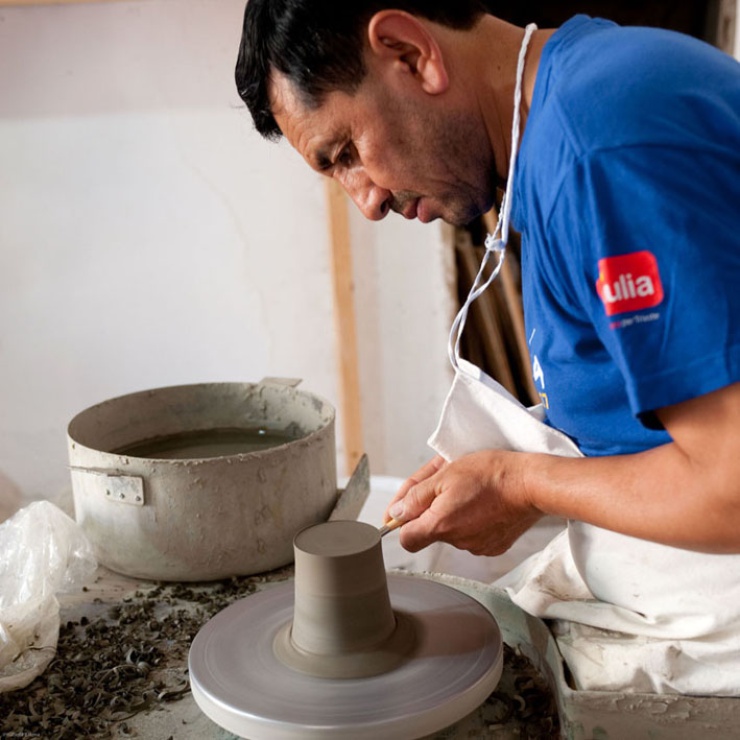 The new residents open shops and send their children to the local school which has also been re-opened for this purpose. Teachers are being hired, bakers, butchers and tobacconists have more work , as does Riace’s old shoemaker, now retired, who makes leather shoes by hand. 'Immigrants come to me to get their shoes repaired, but for free: I don’t ask for money because I know they don’t have any.' In the region there is a special currency which circulates - it is a bonus which will be paid off later with contributions to the community. The 50 euro notes have Gandhi’s face on them, whilst Martin Luther King appears on the 20 euro notes and Che Guevara on the 10 euro notes. Immigrants use these for everyday purchases.

In addition to welcoming immigrants, another important project in Riace is sustainability. As well as passing on the trade of oil and marmalade production, a 'teaching farm' is run by the farmer's cooperative, made up of both original Riace residents and immigrants. There are fields for trees and vegetables and stables for a variety of animals such as milk cows and the famous Riace donkeys who harvest in a slightly different way: door to door, guided by two new residents, an Afghan and a Ghanaian, founders of the joint cooperative 'the kites'.

'Immigrants come to me to get their shoes repaired, but for free: I don’t ask for money because I know they don’t have any'

Riace is part of the 'solidarity network of communes' (Recosol), a project which puts local authorities of wealthy cities in contact with their counterparts in disadvantaged cities. Thanks to the support of this network, 'city of the future' has opened an online store for artisanal products made in the local workshops. Today mayor Domenico Lucano is asking for support for a social housing project which would give homes to immigrants. 'The lesson we can learn from our ten year experience is that areas in the countryside which have been affected by the problem of emigration can now welcome people instead of continuing to depopulate,' he says. 'We must implicate measures in the local economy which can transform the lives of residents and the future of the community It turns out that refugees are not a problem; they are an asset.'