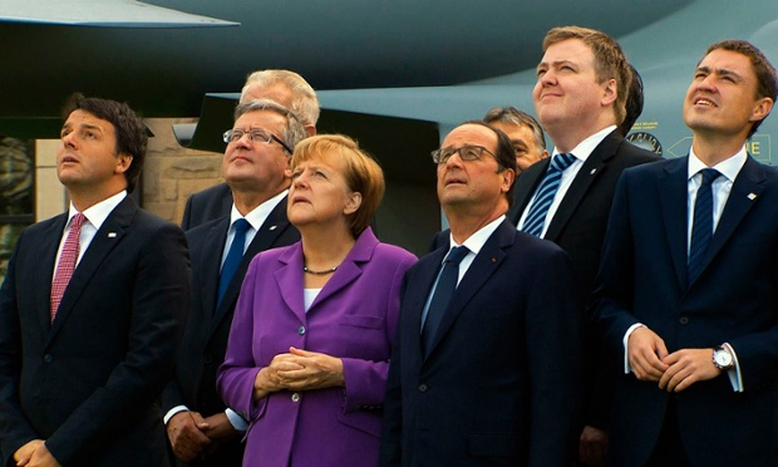 Reviewing the end of Europe: The Great European Disaster Movie

Storm clouds gather. The EU has collapsed. Nationalism has taken hold. Director Annalisa Piras and The Economist's former editor Bill Emmott's latest film, The Great European Disaster Movie, paints a grim picture of the future but also analyses how we can avoid sleepwalking towards such a disaster.

The Great European Disaster takes us on two parallels, the present and the future. Up above, we see a plane making its journey in a Europe of the future.  On board, an archaeologist (Angus Deayton) talks with his fellow passenger, played by Flavia Piras Trow. He's going to deliver a talk on a historic artefact. The artefact? The European Union. Our archaeologist talks wistfully about the European Union and what it stood for, and how it drifted into disaster... 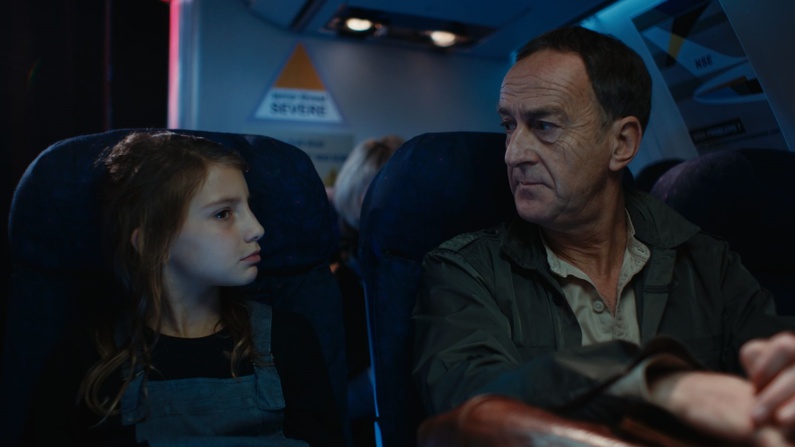 In this future, nationalism has taken hold, the EU has broken up. Nigel Farage is Prime Minister of Great England. Marine le Pen is the President of France. While they talk, we learn that the plane is on a journey with no certain destination. Germany, is battling an energy crisis alone and suddenly can't accept passengers. The plane hunts for a new airport but struggles to be accepted by neighbouring countries. It signals a return to a pre-Schengen Europe, where passengers must pass strict criteria in order to be let into their destination country.

"The idea was part of a nightmare set in the future that people could relate to," Director Annalisa Piras relates. "It's been a fact that people have been enjoying freedom of movement in the EU for 20 years. But what if this were taken away? This is something that the younger generation has grown accustomed to but is by no means a given. We hear from the anti-European movement how better off we could be without Europe, but no one really makes a case of what are the things we could lose. The idea that was that we could take our minds and stretch them to imagine a future in 20 years." 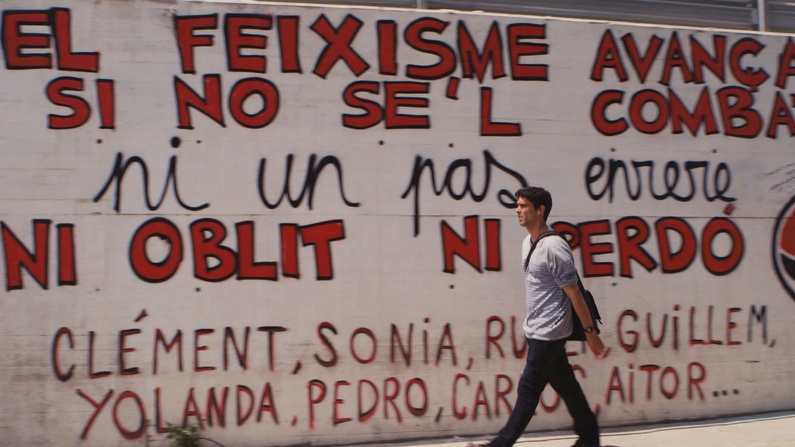 In the present, we hear about the current crisis from various commentators as well as follow stories of ordinary citizens from across Europe. In Barcelona we follow the stories of people feeling the pain of austerity. In the UK we meet a councillor out campaigning for the  United Kingdom  Independence Party (UKIP) in coastal town Margate, Kent.

In Croatia, a photographer talks about nationalism and the conflict in the Balkans just two decades ago. Each set of characters paint a fascinating picture within the context of the EU crisis of today.

Fiction, but not only...

The documentary has not been without criticism from Eurosceptics. UKIP hailed it as pro-EU propaganda. An article in The Daily Telegraph accused it of scaremongering. But the piece is a critical portrait. If it's in favour of the union, then it agrees that major change is needed. There's analysis of what needs to be reformed in the EU.

Contributors from both inside and outside Brussels talk about issues such as the handling of the banking crisis and a lack of accountability and transparency. A recurring theme is the disconnect between Brussels and Europe's citizens. Equally there is also a reminder of successes since its post war beginnings, and an analysis of how we could solve the current crisis. And the fiction is accompanied by facts and figures which help to dispel a few myths along the way. For example, on the hot topic of immigration another dimension is added by the statistic that approximately 2.3 million EU citizens live in the UK,  in ten years, paying 20 billion more in taxes than they've taken in welfare. 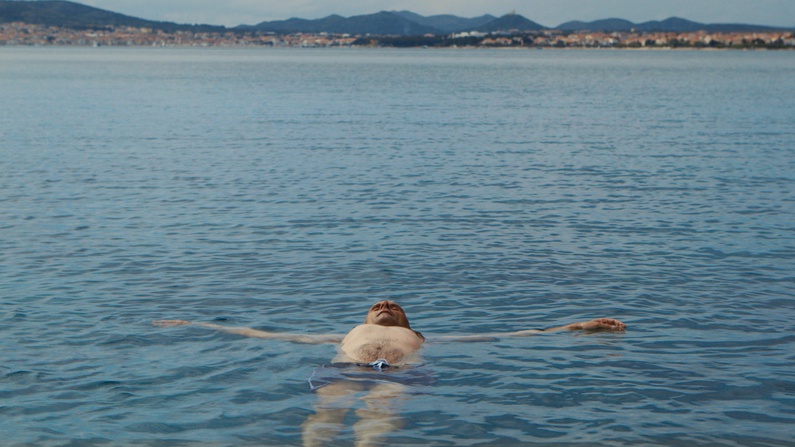 The timing of The Great European Disaster Movie's release is important. Nationalist political parties featured such as Spain's Podemos and Syriza in Greece have continued to gain in strength. Greece's economic and political future continues to hang in the balance. And since the film's release, it looks likely that the UK will to go to a referendum on its membership in the EU in 2016.

Contribution to an awakening

With the film now touring internationally and independent screenings being organised through the official website, the hope is that it will foster debate. Piras comments: "As authors and journalists, the only thing we can hope for is for the film to make a contribution to an awakening for Europeans. We have seen this will not come from political leaders. We need to realise what we are risking, and that would put pressure on the leaders from the bottom up to come up with solutions. People need to think about what we could lose, and how things need to change. What we need very urgently is proper debate on how we change and reform the EU and make it better."

The debate's already taking shape. On May 9th, aka Europe Day, Annalisa Piras was invited to King's College London, along with Anuja Prashar, a 2015 UK election candidate for the Lib Dems, and former Minister for Europe Denis MacShane by the Young European Movement to discuss the film. A consensus emerged among the panel that in the lead up to any referendum, a plural and rounded debate is needed.

After all, Brexit is not a foregone conclusion. The figures are changeable. Latest figures from YouGov polls show Britain's support for staying in the union at an all-time high of 45%, compared with 35% who would vote to leave, the largest lead for the IN side since YouGov began polling the question. Annalisa is cautious about the direction of the debate in Britain:

"Britain is so important for Europe, its role is very crucial. In the past, to have had the opportunity for British people to debate with proper information on the pros and cons would have been good. Now I’m not so sure, the fear is that there is very little chance that the debate will be informed and balanced. The risk is that Britain could leave the EU on false pretenses. This is a very crucial moment, the rest of Europe is watching very closely. The film wanted to be a debating point in Britain, where we are concerned that Britain will sleepwalk to an exit. It could be a main trigger, a snowball effect, and the EU could enter a phase of no return." 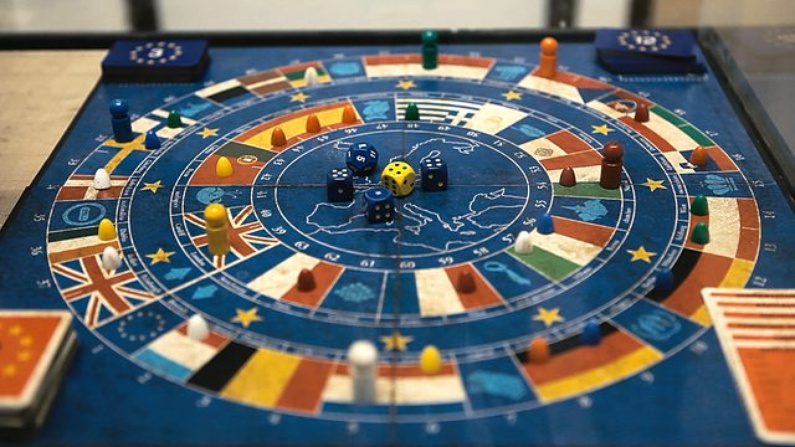 With the conversation on Europe so often governed by a simple In or Out debate in place of an in-depth analysis, the documentary is a crucial chance to open up the conversation for all sides. It looks at the issues with an urgency necessitated by the current crisis. It considers what we stand to lose if the union breaks up as well as what we've gained.

The documentary also reflects on the paradox between how people from the outside view Europe compared to those within, with the news dominated by the many migrants risking their lives to cross the Mediterranean. As Piras sums up, "we want to break the complacency of the Europeans that are inside and take it for granted. For those crossing from Africa, it is the promised land, and we who are inside it don’t realise it, don’t get it."