The climate of social unrest in the Republic of Belarus has worsen after numerous protests in the last few months. The last one was aimed at the infamous law known as the 'Law against social parasites.'

Last Saturday, March 25, an unofficial protest in Minsk was suddenly disrupted by the clashing sound of shields wielded by the anti-disturbance police force who was blocking the main streets. The violent and overwhelming response begun hours before the actual march and ended in almost seven hundred detentions.

The unsuccessful protest was meant to coincide with Freedom Day, an unofficial holyday meant to represent the foundation of the Belarusian People's Republic in 1918. This national holyday is organized anually by members of the political opposition to the regime of Alexander Lukashenko, president, accused of electoral fraud in several occasions and of ruling the country with an iron fist since 1994, thus earning the nickname of “the last European dictator.” But, what exactly is the purpose of these protests?

The origins of these protests was born out of a growing number of unpopular decisions taken by the government, particularly the “Law against social parasites”, which has awoken fierce opposition even amongst Lukashenko's political party. Approved in April 2015, this infamous law establishes a special tax of around 220 euros to those people who work less than six months a year and that, consequently, do not contribute to the financial well-being of the State.

With the blessing of the Constitutional Court, this law was conceived with purpose of combating illegal jobs, even though the hardliners see it as anti-constitutional and a reflection of the surge in unemployment and the inability of the State to collect taxes. Furthermore, they blame the high crime rate on unemployment, and the social problems faced by pregnant women, citizens with disabilities, recent graduates and people in the social care sector on the lack of opportunities and stable jobs for them.

In fact, people going through a difficult situation, citizens living abroad and deceased people were also included under that law, which led them to nullify it until October 2017. The State has assured the country that it will not repeal the law because of its unpopularity. At the end of 2016, of the 470,000 citizens that were suppose to pay taxes, only 50,000 did.

“For several weeks we have been witnessing a secret political witch hunt against activists which today has reached its climax when security forces used violence against the working class”, said a journalist via phone who witnessed the repression and wishes to remain anonymus. “I have never seen so many police officers in Minsk, not even during the protests in 2010”.

Belarus has a well-known history of repression against peaceful protests and prohibiting people the right to assemble. The most important protests took place in December 2010 and in the summer of 2011. The first one denounced once again fraud during the presidential elections that kept Lukashenko in power. The idea was encouraged by international observers from the United Nations and Human Rights NGOs. There were more than seven hundred detentions, amongst them the main political opposition accussed of disturbing the peace. The second one, based on economic reasons, called all citizens every Wednesday to join the peaceful protests without slogans or signs. Both protests resulted in a growing number of political prisoners. 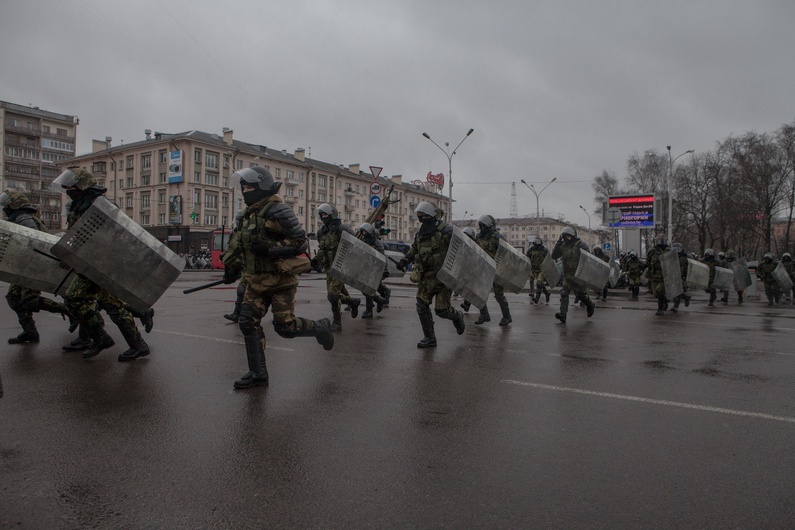 Since then, the absence of protests has led the belarusians to perceive themselves as a peaceful and patient people, an aspect that has been exploited by the government to sell an image of social order, so it can contrast better with the internal problems of its neighbor, Ukraine. The idea seems to have paid off, and Lukashenko enjoyed a new victory in the presidential elections in October 2015, having resorted to fraud or not. Nevertheless, in the current context of the economic crisis in the country, worsen by low wages and an increase in prices, the protests have not only forced the citizens into the streets, but also to show their growing discontent and distrust in the government.

“The government has been unable to predict this response, they thought everyone would accept this new law”, noted Sasha, an alias used for safety purposes, a supporter of Human Rights NGOs based in Minsk. “The main difference between the protests of 2010 and 2011 is the current mood because the protest on Saturday has political and economic motives.”

The Viasna Human Rights Centre has recorded three hundred and fifty dententions since March 3 and estimates seven hundred more last Saturday, from which only the young and elderly were freed a few hours later. In other parts of the country such as Brest and Byaroza, dozens of people have had the same luck, amongst them leaders of the opposition and advocates of Human Rights NGOs [Belarus is usually at the bottom of the Human Rights NGOs ranking. According to Amnesty International, in Belarus "they continue violating the rights of free speech, assembly, and peaceful protest. The government refuses to cooperate with representatives of the UN regarding the state of Human Rights NGOs in Belorusia. At least four people were executed and another four sentenced to death", ndlr].

It is estimated that at least ten journalists have been violently detained without any reasonable explanation and some of them have been released a few hours later. Front Line Defenders denounced that 58 observers from various Human Rights NGOs were taken from the Viasna Human Rights Centre. Also, Vladimir Nekliayev, head of the belarusian oposition was detained to stop him from joining the protest. The next day, twenty four more people were detained in a small gathering in solidarity with the arrests on Saturday.

“It is unclear what will happen with these arrests and the effect it will have on our neighboring countries,” added Sasha. In the last twenty years, the belarusian government, represented by Lukashenko, has designed its policies with two goals in mind: the approval of the European Union, which on Saturday condemned the repression in the press, and its economic and military alliance with Russia. “After a few political gestures and the release of political prisoners in 2016, the government and the European Union had sold the image of transparency and democracy in the country, but the Human Rights NGOs have reassured that nothing has changed since 2011.” March 25 has also coincided with the festivities of the sixtieth anniversary of the European Union's foundation. Last weekend in Russia, the police has also detained people protesting against corruption all across the country.