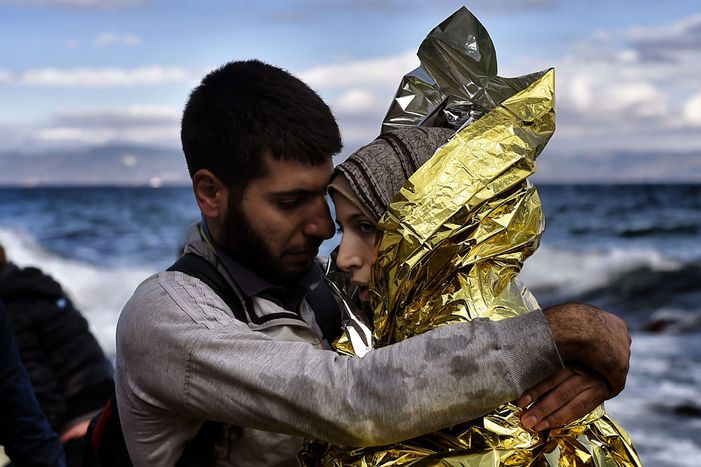 A growing number of EU countries are threatening to push Greece out of the Schengen zone if the country doesn't take steps to stop the influx of refugees. Commentators argue that Athens can't be given all the responsibility.

The EU partners should take themselves to task when it comes to the failed refugee policy, writes the liberal daily Ethnos: “In particular those EU partners who claim that this problem only concerns us, and that we have failed to deal with it. The problem concerns everyone in the EU, and only concerted action and cooperation can lead to a solution. Certainly we must be more consistent in performing a number of our duties. But the EU too must become more effective as regards planning and implementation. … If these conditions had been ensured in time, many problems could have been avoided. Since the EU has failed to get Turkey to fulfil its obligations we must now start looking for the culprits in Brussels. Or in Berlin.” (26/01/2016)

The four Visegrád states of the Czech Republic, Poland, Hungary and Slovakia have criticised Greece's alleged incompetence as regards sending back refugees. The liberal daily Dennik N defends Athens and argues that Turkey should play the key role instead: “Greece can't stop the refugees, however that's not the result of incompetence but because its border is a sea border. Athens could simply sink the refugee boats and gather the dead bodies from the beach. No matter how strong the Greek navy is its main task can only be to save refugees. But without Turkey's approval it can't even deliver them back to the Asian coast. Turkey, for its part, has no interest in cooperating. It too simply wants to get rid of the refugees.” (27/01/2016)

The pressure countries like France, Germany and Belgium are putting on Greece regarding border controls is typical of the attitude taken by the EU core countries, and the British should take careful note of it, the conservative paper The Daily Telegraph comments: “This is not the first time in recent years that the imperial nature of the EU has been revealed. During the financial crisis, weaker peripheral members such as Greece and Portugal were punished for breaking rules ... which nations such as France and Germany flouted with impunity. … The domineering tendency of the EU’s core leadership is troubling enough to anyone who values democracy. Yet it is being demonstrated just as Britain considers its future relationship with the EU. For that relationship to be sustainable and acceptable to the British people, British sovereignty must be preserved and respected. The EU response to its migrant crisis does not bode well for that condition being met in future.” (26/01/2016)

Greece can't do the job all on its own - Deutschlandfunk, Germany

Simply upping the pressure on Greece won't be enough to stem the influx of refugees, the public broadcaster Deutschlandfunk argues: “Greece is now receiving help, but it must also do more to get its homework done on its own. At the moment Athens has no great interest in stopping asylum seekers on their uncontrolled, unregistered way north. The increasingly unsubtle hints from a number of EU countries that if Greece acts too slowly or not at all it could find itself outside the Schengen Area increase the pressure on the country. .. But even a perfectly functioning Greek external border can only fulfill its purpose if two conditions are met: Turkey must not just let anyone who feels like it travel to Europe and must take back those ineligible for asylum. And those with a right to asylum must be fairly distributed throughout Europe.” (26/01/2016)

Athens gets all the blame - Delo, Slovenia

The EU is blaming its own failures on defenceless Greece, comments the centre-left daily Delo angrily: “It looks as if Greece has become the scapegoat for the entire EU's incompetence in the refugee crisis that is determining so many people's fates. Schengen is about to collapse because relatively small Greece can't manage to stop the historical flood of refugees. The fact that Europe is facing the loss of one of its greatest achievements of the post-war era is down to the EU, which is not prepared to implement a comprehensive solution that includes action in the countries of origin. A solution that provides help for the refugees in the Middle East and foresees a distribution of the burden among the EU countries.” (26/01/2016)

Demands for the sea borders to be closed off are not just inhumane but also absurd, the liberal conservative daily Corriere della Sera argues: “The memory of the lifeless body of little Alan Kurdi which was found on the Bodrum beach in September has faded. The wave of sympathy has subsided, and with it the willingness to generously take in an unlimited number of Syrian refugees, as announced by Angela Merkel. The chancellor has had to bow to the pressure even though dozens of migrant children are dying in the Aegean Sea today. However, the chosen path is not just a fatal blow for Schengen but also seems unfair to Italy and Greece. Germany and Austria can police the land routes with border controls if they want to. But what are Italy and Greece supposed to do when faced with a boatful of refugees that threatens to sink in the attempt to reach their coast? Shout 'stop!' because Schengen has been suspended elsewhere, and let everyone on board drown?” (26/01/2016)