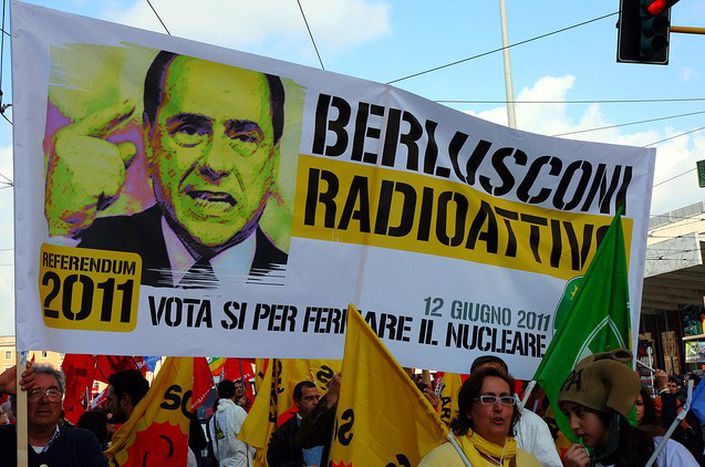 An overwhelming majority of Italians voted in a referendum against reintroducing nuclear energy, and at the same time stopped two more government projects. Still smarting from scandals and corruption accusations, prime minister Silvio Berlusconi is the clear loser, write the German, Italian, Swiss and Spanish press, even though the opposition hardly stands to benefit

After 80% of the votes have been counted, the results show that 94.5% of Italians have rejected the government's plans to reintroduce nuclear energy. Prime minister Silvio Berlusconi has lost his political instinct, the German conservative newspaper concludes: 'People no longer followed his lead when he tried to persuade them that they were better off with him and his decrees than with their own will at the ballot. Even before the polling stations closed - which much to his disappointment had been very full all day - the prime minister was forced to concede on 13 June that Italy will have to bid 'addio' to nuclear energy. For Berlusconi Italy's integration in a nuclear-free zone stretching from Naples to Copenhagen, where not even Nicolas Sarkozy is allowed to export nuclear power plants, is the easy part of the truth. The opposition is not exaggerating when its says that with their 'addio' most Italians were actually hitting out at Berlusconi. Now they just need someone who can do better than he has’ (Andreas Ross)

The vote is a bitter defeat for prime minister Berlusconi, but there is no winner here either, comments the Italian business daily: 'Referendums, with their brutal 'yes or no' dualism, represent the easiest solution in complex situations. In this case the referendum served to fire a salvo against stagnating politics in the context of a no less stagnant economy, against an ossified and effectively prostrate government. Against a prime minister who is too weakened by his private and public lapses to perform his leading role effectively and who above all is no longer in synch with a country that was under the spell of his charisma for seventeen years. The problem is that not even the others know what to do next. A void is opening up in Italian politics and it's not clear who can fill it or how’ (Stefano Folli)

In the referendum on 13 and 14 Jun, the Italians rebuffed not only Berlusconi and his scandals, but also his policies, writes the Swiss daily: ‘Of course this result is not just a vote against Berlusconi. Doubts about nuclear power and privatised water supplies are also widespread among government supporters. Nevertheless, the substantial turnout and the almost uniformly high results allow but one conclusion. A growing majority of Italians has had enough of Berlusconi, his escapades and his policies. Italy has been stagnating economically for a decade, and now they want a government that at last tackles the pressing reforms and brings the country forward again’ (René Lenzin)

The referendum against three projects backed by Italian prime minister Silvio Berlusconi highlights the enormous discrepancies between him and the people, writes the Spanish left liberal daily: 'The prime minister betting on nuclear energy has been crucial to the decision of the Italians. A Berlusconi in decline was the worst possible advertiser for a cause that after Fukushima is once again highly controversial. The other two questions referring to the water management have also resulted in a defeat for the government. Every time Berlusconi talks of privatisation the Italians think he's opening up a new field for corruption. As well as sending an unequivocal political message the Italians have spoken out in favour of renewable energy’