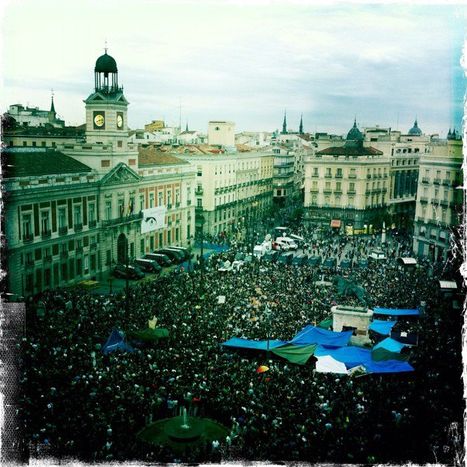 Spain’s so-called 15-M has become 29-M, referring to the dates of the sit-in protests of a Spain in May which saw local elections swinging to the favour of the opposition conservatives. The rage is sweeping Italy, Belgium and France

Spanish authorities had threatened the 15-M (15 May) movement against establishment politics, out of fear it would influence citizens in local and regional elections on 22 May. But the peaceful militants were allowed to continue their protests, which are being applauded for uniting all kinds of profiles and generations in a constructive environment. Headquartered in Madrid’s main square, the Puerta del Sol, the mobilisation didn’t have much impact on the urns, where the governing socialists lost 10% of votes to the right-wing PP or popular party. Protests are said to continue until 29 May.

Their chancellor may have voiced her thoughts that the Spanish and Greeks took too many holidays, but the Germans haven’t reacted to the suffering of their young European neighbours with indifference. The political blog Spreeblick  translated the Spanish manifesto into German and the facebook page Echte Demokratie jetzt! after the original Democracia Real YA! (‘real democracy now’) platform, already sees some 5, 500 members in its midsts. The first of the protests took place on the evening of 18 May in Berlin and again at the weekend of 20 and 22 May in Hamburg, Düsseldorf and Berlin. 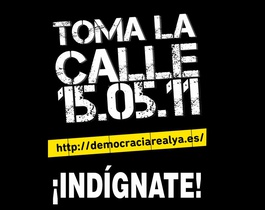 The Democracia Real Ya – Brussels antenna has been created in Brussels and edges the story further onto a European political platform. A European petition is in the making.

Like the Spanish, the Italians are already on the streets. The ‘Italy of our unhappiness’ (L’Italia del nostro scontento) is how the Democrazia Reale Ora has been angled when they went out into the streets on 21 May, ironically in Rome’s Spanish square or Piazza di Spagna. 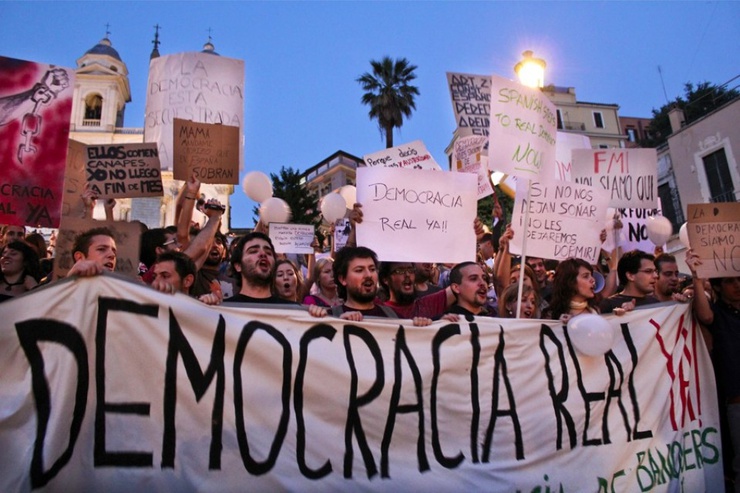 The #italianrevolution noise is being made against the power of both nepotism and vote-catching, and in favour of free transport and the application of a Tobin tax, which is a tax on financial transactions. The manifesto was given out by young people in the movement and saw a mix of complaints at the country’s domestic policy with a certain raising of the moral standards of international policies. The Spanish message is spreading like wildfire to its Mediterranean neighbour.

20 May, 23 May,Bastille square. The French were out in support of their cousins on the other side of the Pyrenees, in a self-beguiling attempt perhaps at distancing themselves from the DSK affair or the Lars Von Trier-Nazi scandal at the 2011 festival of Cannes and aligning themselves with the people’s voice. Some 300 young (and younger) people have been marching from the Opera in Bastille and #acampadaparis has seen the light of day. The next protest at Bastille will be on 29 May at 2pm.

Europe’s main squares are begin taken over by camping citizens in makeshift tents, following over sixty cities in Spain’s example:

#acampadelsol: The young people of Madrid are singing, debating and hanging out on the asphalt of the Puerta del Sol.

#acampadabarcelona sees workshops, debates, a library and a nursery on Barcelona’s Plaza Cataluña.

But of course, the Spanish model is a follow on from the Arab spring model, and its Tunisian and Egyptian mobilisations. An online map is tracing these movements from Warsaw to Ljubljana, thanks to Spanish expats outside embassies in cities such as London and other citizens in solidarity with the cause. Mid-May is seeing a real pan-European success for the people’s voice.