In the Hague, the International Criminal Tribunal for the former Yugoslavia yesterday announced their verdict in the trial of the former President of Republika Srpska during the Bosnian War. It condemned Radovan Karadžić to 40 years imprisonment for the Srebrenica genocide. Cafébabel was at the trial.

"My father was in a concentration camp at the time," says Ajdin Cehic, "This trial is extremely important for our family.” His words come just before the announcement of the final verdict of the The International Criminal Tribunal for the former Yugoslavia – at the heart of The Hague – which condemned Radovan Karadžić to 40 years in prison for the Srebrenica genocide.

Like Ajdin, dozens of other people have travelled here from Bosnia in order to voice their anger one last time, reminding the entire world of these dark hours in their country's history. The activists, predominantly Bosnian, carry placards and banners baring the flag of Bosnia and Herzegovina, the words "genocide" and "war crimes", and a (no doubt inexhaustive) list of the victims of the Srebrenica genocide.

“It changed my life” 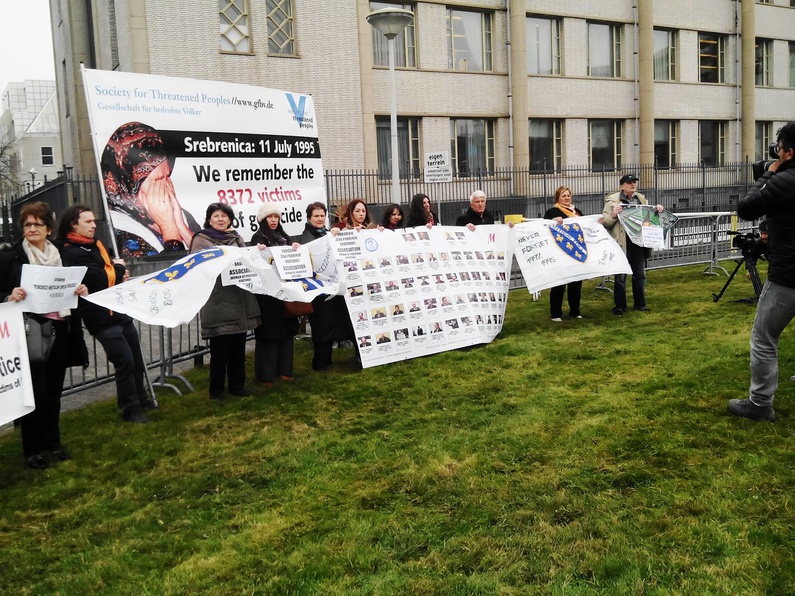 They were awaiting one thing, the formal recognition of the crimes committed by the former leader of the Bosnian Serbs, in particularly that the Tribunal recognise that Karadžić was guilty of genocide in multiple municipalities, notably Srebrenica, against the country's Muslim population. Azmir Husić, a native of Srebrenica, has also travelled from Bosnia. "We’ve come nearly 1,650 kilometres to be here," he affirmed, "We hope that Karadžić will be punished for what he has done to hundreds of thousands of people."

The victim’s families have waited over 20 years for justice to be served, making this an important day for many. "It’s a historic day," says Elmina Kulašić, "I was seven years old during the massacres. It changed my life. I’ve been in search of the truth for 20 years."

The manifestation had been largely placid up until the sudden arrival of Florence Hartman. This former Le Monde journalist and former spokesperson for the Attorney General of the Tribunal published a book a few years ago – entitled Paix et châtiment (Peace and Punishment) – in which she denounced several dysfunctions within the court, including a secret agreement between Karadžić and the United States. She has come to speak once more on the subject but is taken to task by the police. After several minutes of total confusion, she is arrested and taken away. 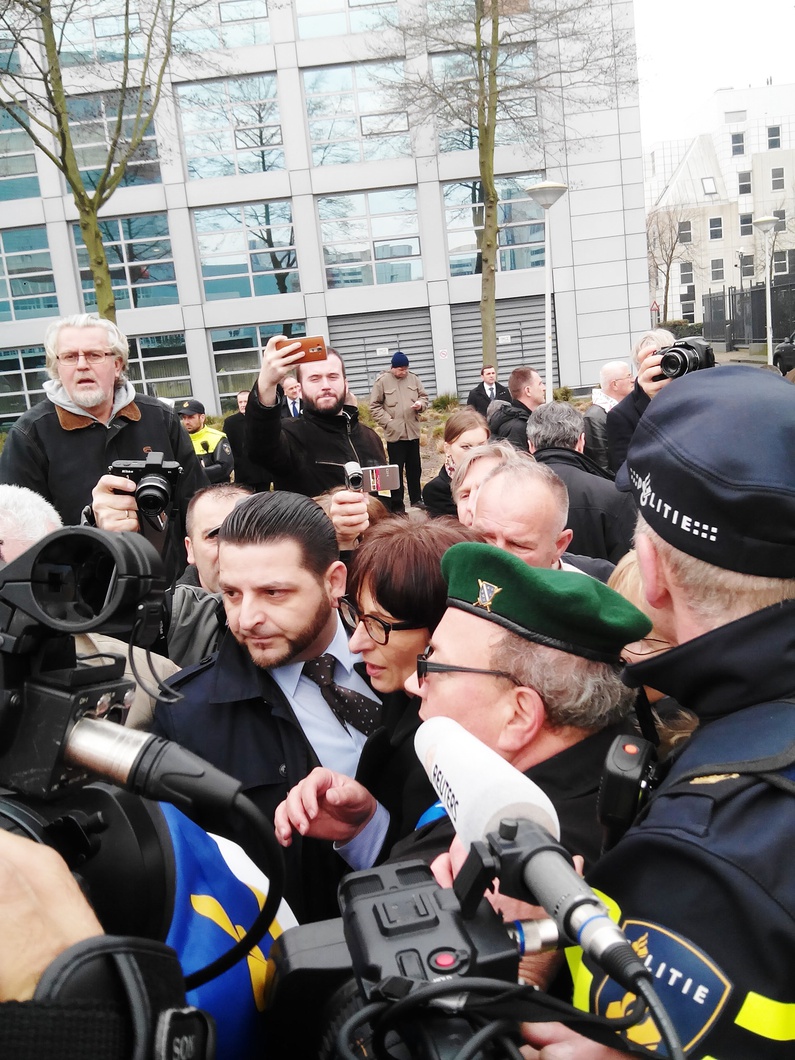 This highlights the controversy and ever-present tension that has surrounded this trial for many years. Bosnia and Herzegovina remains divided by these years of war, and the uncertainty surrounding Karadžić's sentencing has left certain protestors sceptical. "Protests could break out whether he is condemned or not," Ajdin notes, "One side or the other will protest. It’s a very delicate question."

Disappointment at the verdict

After what was nearly a two hour monologue from the judge, through which the former Serbian leader displayed no emotion, the verdict was announced: Radovan Karadžić is found guilty of crimes against humanity, war crimes, and genocide at Srebrenica. However he is absolved of genocide in other Bosnian cities. His is sentenced to 40 years imprisonment.

Even more activists are waiting at the exit of the Tribunal for the families of the victims that assisted in the trial to emerge. Elmina Kulašić says she is moved by the announcement – it is a very important day for both her and all of Bosnia. However, like many othes present, she is also disappointed. She believes that "all the proof has been gathered for acknowledging that Karadžić was also guilty of genocide in other regions of Bosnia." In her view, Srebrenica was only the culmination of a policy of terror led by the former leader and his followers over the years.  On top of this she would've hoped that the accused be given life imprisonment instead of 40 years. It wouldn’t change much given his age, but it's symbolic value is real. For the most part, those assembled share this sentiment.

The sentence seems not to have satisfied anybody; when Karadžić’s lawyer, Peter Robinson, emerges surrounded by journalists, he too voices his dissatisfaction. He said that he has spoken to Karadžić following the sentencing, who was disappointed and surprised by the verdict. He had hoped to not be sentenced for genocide and was extremely surprised to have been found guilty of such a crime.

The reaction of the former President of Republika Srpska is in line with the rest of his defence since his arrest in 2008. On the day of sentencing, he even stated in an interview with the Balkan Investigative Reporting Network that he expected an acquittal.

The lawyer added that he and his client were going to make an appeal on ten different counts. They have 30 days to do so, but the entire procedure will take around three years. 20 years after the last piece of evidence, it will be necessary to wait yet longer for the conclusion of this legal saga. The wounds left open during this trial are not yet ready to close.