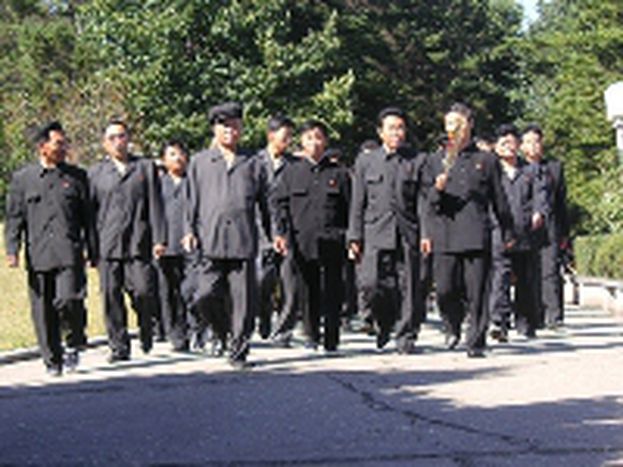 Pyongyang: much ado about nothing?

Two months after North Korea's first nuclear bomb test, and six-party discussions resumed after a thirteen-month silence. Is there anything left to negotiate?

’Why would we abandon nuclear weapons? Are you saying we conducted a nuclear test in order to abandon them?’ - Kang Sok-ju

That was North Korea's deputy minister for Foreign Affairs fleeting statement last month regarding his country’s nuclear ambitions. The six-party nations – Russia, the United States, Japan, China and the two Koreas – managed to resume negotiation talks under Beijing’s impulse, but the nuclear arm-wrestle looks far from being won.

Flashback to the negotiations with North Korea in the years between 2003 and 2006, and dissuading Pyongyang from pursuing the development of a nuclear programme openly centred on the military domain. For a long time, the big powers were agitated, carrots-and-sticks in turn. China, the other participant at the negotiations, juggled its role as a natural ally of its communist brother and that of a new, responsible international power.

In September 2005, events took a dramatic turn. Washington unilaterally froze North Korean assets placed in foreign banks. It was an unjust sanction, according to Pyongyang, which has since pursued multi-party negotiations to lift the restriction.

It was in autumn 2006 that the last Stalinist regime of the planet won its bet and entered the exclusive nuclear power club. On October 9, Kim Jong II defied the international community by carrying out a series of nuclear tests. A statement by the North's official Korean Central News Agency declared that, ‘The US extreme threat of a nuclear war and sanctions and pressure compel the DPRK to conduct a nuclear test, an essential process for bolstering nuclear deterrent, as a self-defence measure in response.’

What to do now? That's the burning question on the lips of all diplomats in place. If the option of armed intervention is still valid, how do you attack a country which, from now on, possesses atomic weapons? The risk seems too big. The Taepodong II missile has a range estimated at 6700 km (4200 miles), allowing North Korea to strike Alaska. Other experts claim that a version of the missile could have a range of 15,000 km, putting the entire American territory in danger.

As for military confrontation, no country has the means to attack an army which is aligned with more than a million soldiers, except the United States who at the moment is profoundly bogged down in Iraq.

The entire international community rushed to condemn the North Korean nuclear tests, voting on the UN Resolution 1718, matched with meagre sanctions. On the agenda: an embargo on all military products and technologies which could benefit the regime, and on luxury products. One of the new strategies is aimed to deprive the dictator Kim Jong-Il and his 600 subservient families from their favourite gadgets – for example, German cars, French alcohol, high-tech Japanese or American products. The sanctions are also financially aimed at restricting certain North Korean assets in overseas banks, thereby halting technological aid.

In this configuration, the European Union has its role to play. If it supports the United Nations resolution against North Korea, the European Union is hoped to pursue its humanitarian aid package evaluated at 8 million euros for the year 2007. European non-governmental organisations have been present in the country since the 1990s and the principal rule is to not punish people who have been oppressed for a decade because of its government.

A high-ranking official of North Korea's Foreign Ministry declared to Le Monde: ‘We hope that the European Union pursue its politics of stabilisation of the peninsula, and we are ready, for our part, to respond to its preoccupations in furnishing all the guarantees of non-proliferation.’ Notably, it’s about finding a happy medium between the uncompromising Americans and Japanese, with the North Koreans trapped in their own war-like, anti-imperialist imagination.

Another fear which drives the leaders of the six-party nations is if Pyongyang transfers or sells its nuclear secrets to countries such as Iran or its terrorist groups. On their side, the International Atomic Energy Agency deems the taken sanctions as insufficient. Everyone has announced their positions. The diplomatic ballet ensues.