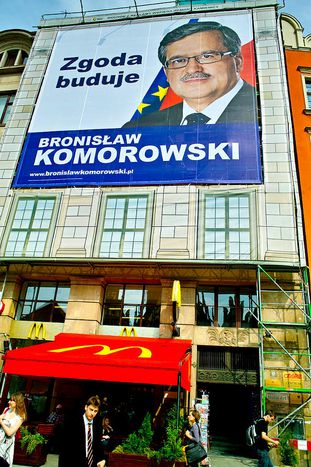 The Polish people didn't vote emotionally on 4 July. Bronisław Komorowski won Poland's presidential elections with 52.6% of the vote across 95% of constituencies. His challenger Jarosław Kaczyński, twin brother of the late president Lech, trailed at 47.4%. The German, Italian and Polish press hail the politically mature result

In voting for Bronisław Komorowski the Poles have cast their ballots for a diplomatic president, writes the left-liberal daily: 'A large number of people didn't vote for the sallow, wooden Komorowski because they trust him as a politician, but because they wanted to prevent Jaroslaw Kaczyński from being elected. His name is associated with the era of permanent political conflict. Such a confrontational style is hardly imaginable with Komorowski. Certainly he is just as concerned as the Kaczyńskis to further Poland's interests abroad. But his idea of what those interests are is different. As a historian he has come to understand that Poland can only strengthen its sovereignty in alliance with the western democracies. Like his fellow party member prime minister Donald Tusk he is led by the motto: The smoother the EU functions, the better it is for Poland' (Thomas Urban)

The results of the Polish presidential election testify to Poland's political maturity, the left-liberal daily writes: 'Poland remains European and modern. Twenty-one years after the democratic revolution that brought the fall of the Berlin wall and the soviet empire Warsaw is sending the world a message of hope, a message of maturity and political commitment. The voters have ignored the church's advice. It had given to understand that it preferred the national-conservative challenger and is now being forced to recognise the limits of its power in this new Poland. The young, liberal prime minister Donald Tusk, the preferred dialogue partner of the 'new Europe' now has free rein. He no longer need fear that a Kaczyński will obstruct his modernising reforms' (Andrea Tarquini)

The winner of the Polish presidential elections Bronisław Komorowski has made a good start by bringing those who voted for his opponent Jarosław Kaczyński on board, writes the online edition of the news magazine: 'Politically it's important that he reached out his hand to the other part of Poland - the Poland that voted for Kaczyński. It's good that he saw the division in Poland and has promised to overcome it. This is the way winners behave in mature democracies. He's not allowed to add fuel to the fire. On the other hand Kaczyński's statements after the election had more political substance. He expressly wants to adopt the role of opposition leader - that of the party politician. This is what Kaczyński loves and is really good at' (Adam Szostkiewicz)