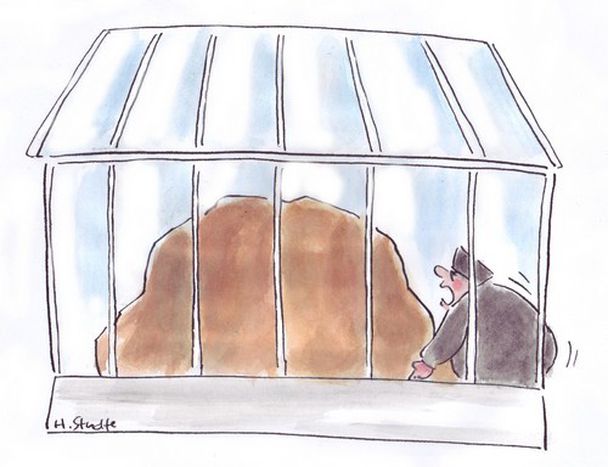 Were we to one day have a common continental way of chiding hypocrisy, perhaps the following would be the western European example: 'What the pot said to the preacher who threw a stone from the pulpit at the camembert cheese as the hospital laughed'.

Back in the days when we cooked on coal fires, the iron pot and kettle would turn black with the soot of the fire. The English image of the pot calling the kettle black is reversed in Polish, where the bigger kettle becomes the hypocrite: przygania kocio garnkowi a sam smoli. The French slide in a humorous spin on the idea: c'est la casserole qui dit a la poele 'cul sale' - it's the pot telling the frying pan he's got a dirty ass.

Moving away from kitchen utensils and their brass asses (being 'as bold as brass' or 'having the brass neck' to do something echoes similar sentiments of over-confidence in English), to more edible items in the kitchen. Not restricted by the strains of stereotype, the delightful French le camembert qui dit au bleu tu pues - the camembert cheese telling the blue cheese 'you smell', replaces the more common saying c'est l'hôpital qui se fout de la charite - it's the hospital laughing at the charity.

Germans warn at the fragile sensitivity of your location, by warning that wer im Glashaus sitzt, soll nicht mit Steinen werfen - you can't throw stones if you are sitting in the greenhouse!. But the Italian's intensely Roman Catholic identity creeps in as they marvel with senti da quale pulpito viene la predica! - hark at which pulpit the preacher is preaching from!. The performance aspect and Pope-in-Vatican throwbacks of this saying is also perhaps the most apt, in considering the origins of the Greek word hypocrisy (hypokrisis), literally meaning 'acting out.'