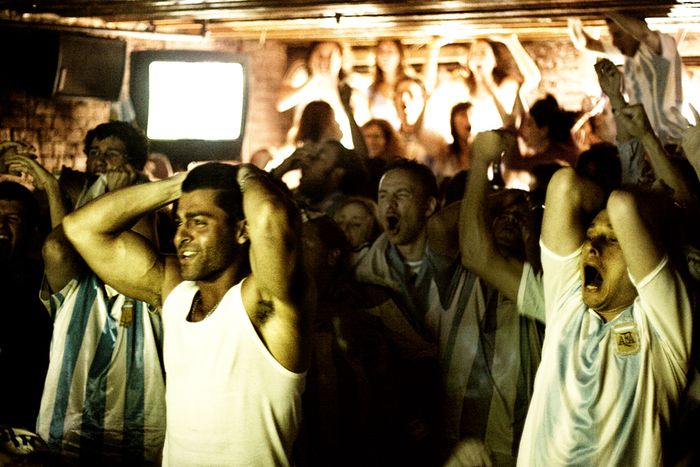 As the World Cup moves into the next phase – sixteen of the best battle it out for the second round from 26 June – we follow the 2010-featuring European teams in song. Spain, Holland and Germany are EU favourites as runners-up on 11 July, with Brazil or Argentina to win, according to betting agencies

Football - it's pure politics. Omar and Fred, comedians from the Grand Journal news programme on French channel Canal+, propose their anthem cocktail, Bleu Blanc Rouge ('Blue, White, Red'), for the world cup 2010. This includes a debate on national identity of the 'black-white-arabs' (the winning Algerian French and African national team of 1998 - ed) and Omar sending up the French Tunisians who refused to whistle the national anthem during a France-Tunisia match in 2008. But with France having to beat the hosts South Africa (at least 4-0) on 22 June to enter the last sixteen, it's another comic duo, La Chanson du Dimanche ('Sunday Song'), who are trying to boost Raymond Domenech and his in-fighting French side:

Eyes on other PIIGS

The EU breathed a tiny sigh of relief when the world cup started on 11 June; the eurozone countries with the biggest debts would finally be talked about for something else than their financial (lack of) prowess. Greece and Portugal play competition South America favourites Argentinaand Brazil on 22 and 25 June, whilst Spain play Chile on 25 June - probably backed up to the chants of A por ellos, Oe ('Go For Them, Oe')

The official 2010 song Roja Pasión Española ('Red Spanish Passion') is rather more dull, maybe because it was composed for the centenary of the Spanish football association

Meanwhile, red passion becomes red-and-white with the English, who haven't won a world cup since beating West Germany in 1966. Thus, when British band The Lightning Seeds released Football's Coming Home as the official Euro '96 anthem, it became iconic to the mood of a nation. The song was even re-released for the '98 world cup with the adapted lyrics 'we still believe...that football's coming home'. Both versions hit the top of the UK charts, and the English made the quarter-finals in both competitions

Football's Coming Home hit number 16 in the German charts that year. But the Nationalelf's number one anthem is Sportfreunde Stiller track, originally written for Euro 2006, and re-released for the 2010 world cup.

A glance at the others

Did we miss an important track? Let us know in the comment box below!