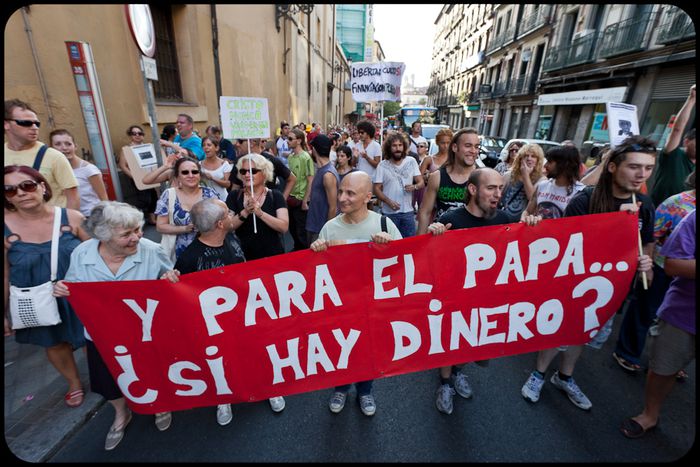 There were two opposing faces to world youth day 2011, which was celebrated in Madrid between 18 and 21 August. Crowds of enthusiastic young people dressed in yellow sang in various cities whilst the highest authority within the catholic church was visiting. Why did this year’s event spark anger amongst a large sector of the population?

Spain is the only country to have hosted these celebrations twice - the first taking place during the reign of John Paul II in 1989. But the pope’s 2011 visit brings to light a sector of young people with devout beliefs in a country with an ever decreasing number of believers. The ingredient is the economic crisis and the cause is the public cost of the pope’s visit. Criticism has focused on the public funding of the pope’s pastoral visit.

Secular march in protest at costs 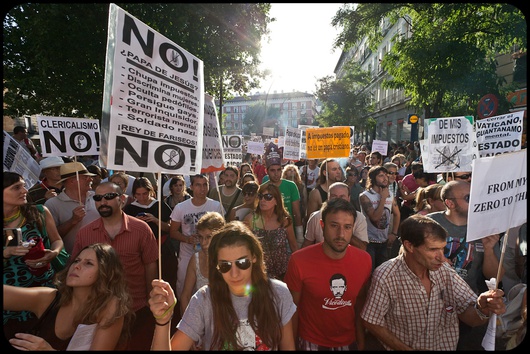 One man was arrested and around one hundred associations had protested against the pope before his four-day visit on 18 August. Although the cost of the visit, fifty million euros according to organisers, is covered by participants and donations from large companies, the state is contributing around 10, 000 police officers, sports complexes and reductions in transport. Even Esperanza Aguirre, the president of the autonomous region of Madrid, sent round a circular to local health centres saying that health care for pilgrims would be free. A few hours later she modified this, clarifying that it would be free when they entered medical centres, although a note of their names would be kept to send out an invoice. This is where the bone of contention lies. It has led to confrontations in the Puerta del Sol square, the convergence point of the ‘secular march’ and the hundreds of catholic pilgrims. ‘We are not against the pope,’ say secular protesters, ‘but rather against the public funding (of his visit).’

Spanish society is divided. According to latest statistics, three-quarters of the population describe themselves as believers, although the percentage of practising catholics is crumbling. It is religion as a dominating social custom within the culture, not the free choice of a religious option, as the writer Jose Luis Sampedro reminds us.

This begs a number of questions. If practicing catholics are not in the majority and Spain is a non-denominational state, why attach such importance to a pastoral event, an exhibition of faith? In political language, the PSOE (‘Spanish socialist workers’ and current ruling party) are not interested in divorcing themselves from the church, since the catholic vote is key for any political party. The right has been historically linked to the latter institution. Nobody wants to lose the support of a large group of potentially influential voters. This is the third visit of Ratzinger to Spain since he became Benedict XVI in 2005. He seemed to receive a distinctly ambivalent welcome when stepping off the plane. Senior state officials were present, many of whom profess no religious affiliation. 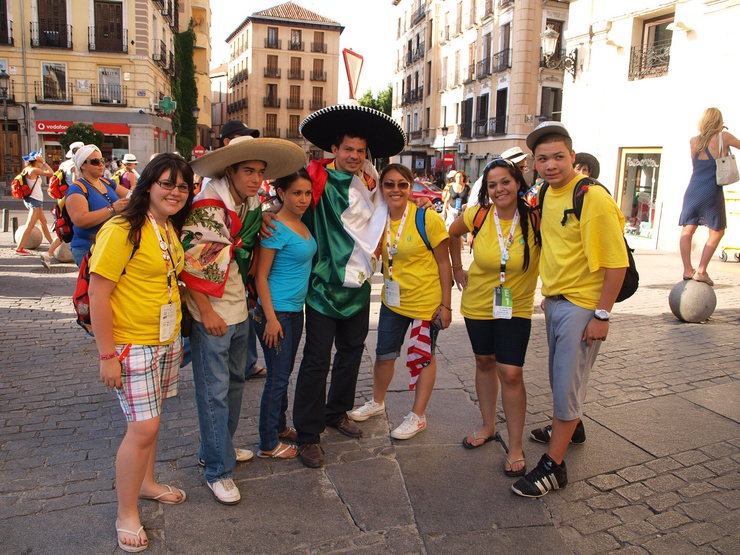 In the pontiff’s visit to Barcelona in November 2010, he railed against the ‘anti-clerical’ atmosphere. The current government wanted him to avoid any mention of internal politics in the course of the eight speeches he was due to make, as it could have potentially compromised their hopes for victory in the next elections on 20 November 2011.

Followers of the catholic church, who are this week roaming the streets with flags, guitars and their faith, are restoring an identity which is losing momentum. They belong to several branches which are coming together for the occasion. Although in the last decade, according to statistics, its popularity has dropped by 10% in a population that declares itself to be believers, world youth day ('Jornada Mundial de la Juventud 2011' or 'JMJ 2011' in Spanish) attracted one million believers to Madrid from all corners of the globe. It was in this collective atmosphere, albeit with questions hanging over it, that the pope called upon young people to ‘not be ashamed of the lord’ on the first day of the visit. Both some basic elements of his message and even some slogans of the 15M movement - ‘man must be the centre of the economy, not the other way round’ or ‘the economy cannot be measured by the rule of maximum profit’ - strike a chord with public opinion.

However in general Benedict’s speech does not seem congruent with reality at the beginning of the third millennium. ‘We do not drink alcohol so you see the real us,’ said one young person as he was getting on a bus this week. But is it really incompatible to profess a faith in jesus christ and to drink alcohol or to be in favour of condoms? The pope’s conflicting thoughts horrify young people who see his speeches as anachronistic and out of touch with current thinking. In any case, thousands were crying in the presence of the pope. Groups of young people could be seen shouting in front of the immense altar of the Plaza de Cibeles, camera in hand, as if in the presence of a showbiz star.

Spain, in extreme contrast to countries like France, can’t shake itself free of its religion-anchored past. Whilst discussion of the subject can sometimes get heated, it never goes beyond rhetoric. The church’s tentacles extend all over Spain and through all social classes. Furthermore, despite less interference from the church in the social life of Spain, it still maintains a considerable influence. Any comment from the church is as likely to make the front page of a newspaper as one from a politician.