Pole to Paris: Cycling from the bottom of the world

In November 2015, people travelled from all over the world to the COP21 climate talks in Paris. For some, the journey was considerably longer than for others. Daniel Price, Director of the Pole to Paris project, cycled to the French capital all the way from the Antarctic. We speak after his 10,000 kilometre ride to find out why, now his journey is over, he may finally be hearing the starting gun.

It's common knowledge that swapping out the daily crush of a Metro train for a cyclist's commute can help cut your carbon footprint. For Daniel Price however, the commute was longer than you might expect – roughly 10,000 kilometres from the Antarctic Circle. Last year, he set out to pedal halfway around the globe, from the bottom of the world to the COP21 event in Paris.

More than a "crazy guy on a bike"

Daniel is Director of the Pole to Paris project, consisting of two incredible journeys, one from each end of the Earth. His personal mission: seven months of pedalling through 19 separate countries.

"The whole thing was built on frustration," he explains. Whilst researching for a PhD in Antarctic sea ice, his interest turned to action. "I became more and more involved with the climate movement as I came to understand how significant the gap between society and science is. If enough people understood the severity of the problem, you would hope that our politicians would be driven to more eagerly address it."

When he submitted his PhD in 2014, he decided to get in the saddle to do something about it. Daniel worked with a team of eight volunteers who supported his incredible journey –along with that of his co-director Erlend Moster Knudsen, whose own challenge involved running to Paris from the Arctic. Together, they sought to raise awareness of the plight of the planet in the run up (and pedal up) to the global climate talks.

"The other thing about climate change is that to many, it's boring as hell," Daniel admits, when I ask why they plumped for such a challenge, "My thought was that the journeys would be a good way for people to engage. If they weren’t interested in climate change whatsoever, they could at least say: 'Oh look, there’s this crazy guy on a bike!' Maybe then they’d come to a talk, or read an article in the paper." 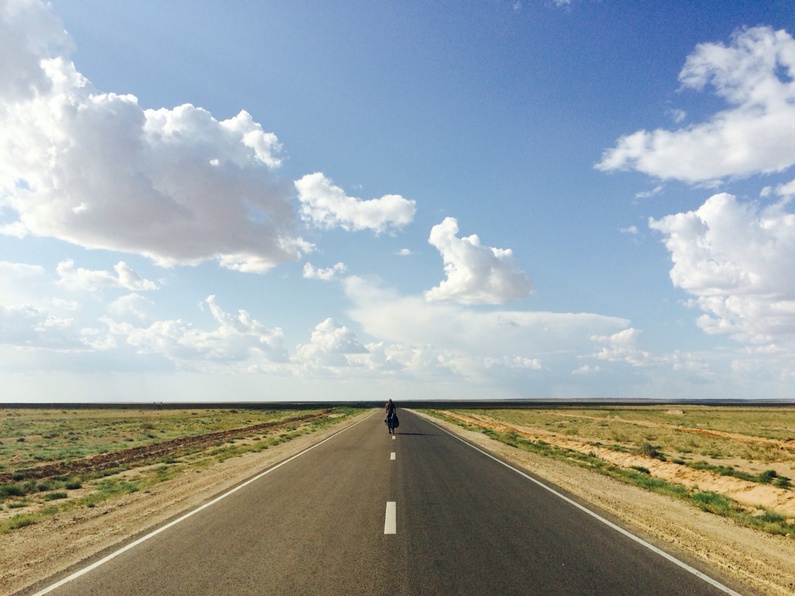 The real path to Paris however, began long before he ever started pedalling. He's always had a strong attachment to the sea – stemming from sailing with his dad as a kid – but the role of climate scientist hasn't been a lifelong dream.

"When I was young I wanted to be a fighter pilot!" he explains, "I flew in a London Air Cadet squadron." His interest waned after moving to Wales, then the second Gulf War killed it off entirely. He found himself working for the Royal National Lifeboat Institution –renewing his fascination with the ocean – before applying for a Marine Geography degree in Cardiff. From there, his passion took him about as far as it was possible to go: Christchurch, New Zealand – one of the main hubs giving scientists access to Antarctica.

Over half a year of riding clocked up hundreds of rewarding moments, the most memorable of which occurred in Jakarta. Over 500 fellow cyclists joined Daniel for an event demanding climate action from the Indonesian government. This was just one of dozens of talks he gave across both hemispheres. "It’s been pretty full on doing the physical challenge, and then trying to run the project on the road," he admits, "the most challenging thing is getting in every evening and then keeping everything going in the right direction." 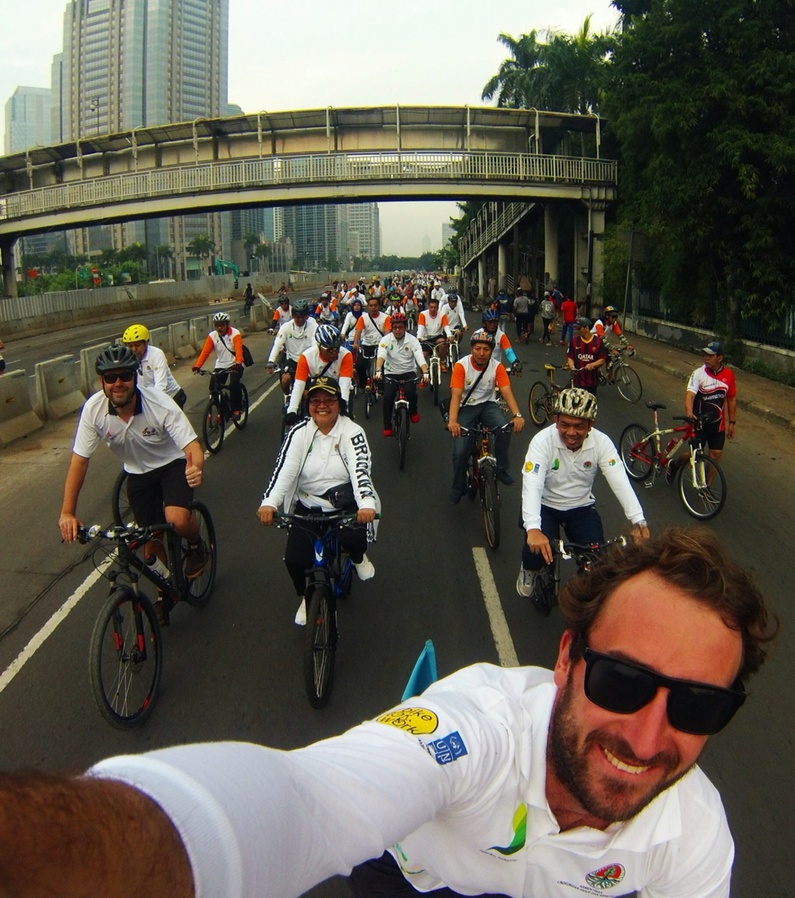 Next stop: Bangladesh. He was struck by the impact climate change was having on the country – there had always been cyclones, but with stronger winds and rising sea levels, Bangladeshis are on the front lines. Whilst in the region, Daniel was commissioned to film a documentary on the topic, due to be completed in March. "It helps to see the big picture in one journey," he recalls, "You kind of think of it like a Hollywood thing – 'Sea levels are going to rise, oh my god!’ – but the major problem Bangladesh is experiencing is saline intrusion into the water supply. There are millions of people who can’t get access to fresh water. That was pretty harrowing to get to understand."

It wasn't just personal challenges taking their toll. Some of Erlend's running events were cancelled in the wake of the Paris attacks of the 13th of November. Pole to Paris put out a message of solidarity to the victims, but Daniel was determined to not let one tragedy distract attention from the global disaster, and the Southern Cycle pressed on towards its final goal.

When the Eiffel Tower finally homed into view, Daniel's Southern Cycle met up with Erlend's Northern Run: "We delivered the stories of the people we had met on our journeys at a talk during the conference... we attempted to present faces to the consequences of the impacts of a changing climate." 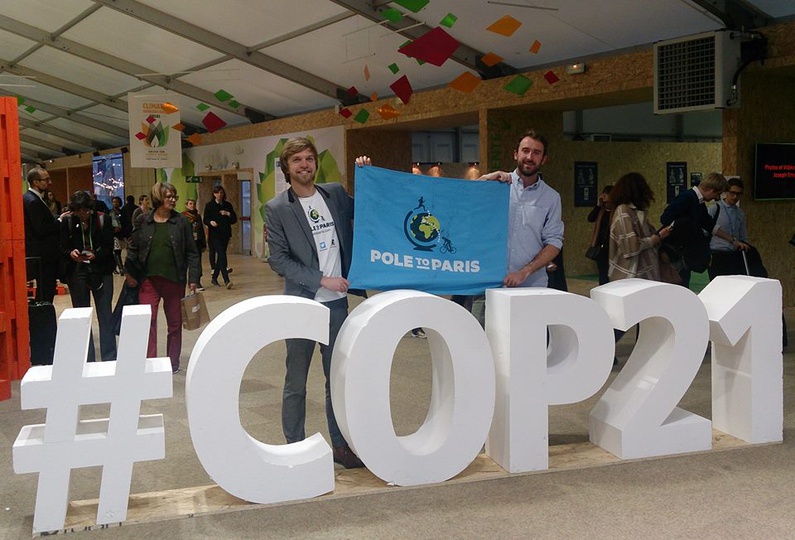 Before COP21, Daniel was cautiously optimistic about its potential for success: "The key word is ambition," he explained, "We’re missing that ridiculous leadership at a level required to make it as successful as it needs to be. We need that JFK moon speech, you know?"

So has the launch gone ahead? After the deal, Daniel said he was "quite staggered" at the ambition written into the document, but was disappointed by some of the specifics. He wants fossil fuel companies to be forced to support renewables – "Their game is up this century, it's just a matter of which decade they make it to. Why not jump aboard the new ship, and help every person on the planet, as opposed to waiting for your ship to sink whilst setting fire to ours?"

When it comes to keeping that particular ship afloat, the lessons from his dad have more than paid off. But the real race has just begun. After Paris, he went back to the UK to work on the documentary filmed while he travelled in Bangladesh: "After that's wrapped up, there is nothing on the cards except some time to decompress and take in the busiest year of my life."

You can read the interview with the Co-Director of Pole to Paris, Erlend Moster Knudsen, as part of last year's #21faces series.