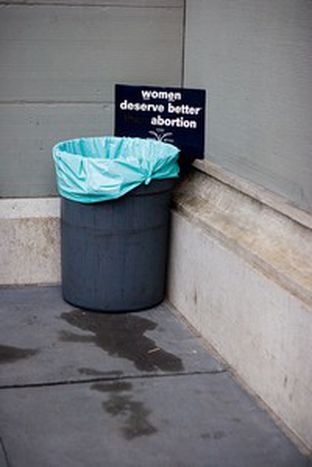 Stop debate on the protection of life 'from the beginning,' say the staunch Catholic right-wing, as they announce an amendment of article 38 in the Polish constitution

Abortion was legal in Communist Poland. In the early 1990’s however, the Socialists started to change things. The Act on family planning, human embryo protection and conditions of permissibility of abortion was approved in 1993, and is still firmly in place today. According to the act, abortion is legal only because of medical problems, malformation of the fetus or when pregnancy is the result of a rape. Nevertheless, performing an abortion is always difficult in Poland.

Official data statistics are low (193 abortions in 2004, with 225 the following year), as a result of banning abortion procedures in public hospitals, under the 'conscience clause.' At the same time, unofficial statistics speak of about 80, 000 – 200, 000 abortions performed underground, in private surgeries, by the very same doctors who 'ease their consciences' with the one month's salary they receive for not intervening.

'If I had an unwanted pregnancy, I would have to leave Poland or risk my life here and try to deal with it. Luckily, I am in a comfortable position, because I’ve got money to deal with it should it ever happen,' says Anna, a 32-year-old activist for the Polish Federation for Woman and Family Planning.

In Febuary 2006, a Polish woman’s case was brought to the European Court of Human Rights in Strasbourg. Polish law meant that the woman was made to see her pregnancy through until her serious disease has disabled her for life.

The abortion ban is not just ideological. Drastic demographic predictions make it pragmatic. Yes, motherhood is the most basic role and natural calling for a woman. But now, it is a woman’s social duty, too. 'Why are our possibilities of giving birth and bringing up a large number of children limited?' asked members of the Polish Women's Forum, in a Women’s Day letter. Politician Elbieta Kruk, member of the Law and Justice (Prawo i Sprawiedliwo/ PiS) political party, appealed to MPs to acknowledge that, 'for women to advance, society has to recognise motherhood and family duties.'

Many Polish women take this policy as a personal threat: 'This is horrifying, the people from the League of Polish Families (Liga Polskich Rodzin/LPR) and PiS people – mostly men – want to have the right to decide for others. I understand, one thousand years ago, this took place. But they knew nothing about cultural and religius diversity. So haven't things changed today?', asks Patrycja, a 28-year-old sociologist.

Splitting Polish society in half

'We will socialise the bellies!' Anti-abortion protestors shout in front of the Polish Parliament. 'Our bodies, our rights!', or 'My belly belongs to me!' The cries signal how the abortion issue has divided Polish society. On one side are those who believe in the values of freedom and individuality. On the other side, there are those who believe in a higher moral integrity. The Polish pro-life society is closer to perceptions of the Catholic Church. The common good comes higher than the interest and the rights of the individual.

Both sides have numerous followers. According to a 2006 survey by the Polish Public Opinion Research Centre (CBOS), 44% of Polish adults are pro and 44% are against abortion performed in the first weeks of pregnancy. In 2005, '57% of adults voted 'yes for pregnancy.' 20% of adults accept social or personal reasons for abortion. 76% of adults admit that a woman’s health is the most important reason in performing an abortion.

In the name of the mother?

The voice of the Church is as powerful as ever, but in this situation does not seem to be decisive. The discrepancy between the teachings of the church and the general practice in society is growing. Opposition to the church is too great, protecting the unborn (whilst disregarding women's rights), along with the traditional vision of marriage and parenthood.

Social 'subject fatigue' seems to be more important. As a result of lengthy fruitless discussions on the theme, the abortion issue remains in the shadow of present political activities. CBOS research indicates that 42% of Polish adults find it both a very important and peripheral issue. 'More kids were marching against Roman Giertych, (appointed Minister of Education/ LPR), than women marching against the intensification of anti-abortion programmes,' says Anna. 'Yes, I attend Manifa (the annual feminist demonstration).' Anna hopes she will gain more public space for her views. 'Our society is so jaded.'

The past few years' experience shows that there is no revolution coming our way. All ostentatious motions and words lead to the past. Efforts may only be fruitful if they focus on a 'positive framework, from the bottom up,' says Marta, from Oka Women's Fund. One could start to make changes in the language used for the discussions, where the unborn still equals an embryo.

Wanda Nowicka, president of the Polish Federation for Woman and Family Planning and co-founder of the women's ASTRA network, talks abortion.

What is the main problem for women who want to have an abortion?

Statistics show that doctors in Poland play a very important role in limiting legal abortion access. Doctors who do not want to perform abortions rely on the 'conscience clause' in the Physicians' Code of Ethics. They can refuse procedures that conflict with their morals. It's a flawed system though; it may be the case in public hospitals, but on the darker side they still perform backstreet abortions illegally. The doctors extend this 'conscience clause' to being about family planning, which is extremely irrational. If a doctor refuses to perform an abortion, a woman cannot complain. She has two options; give up, or go underground.

Does the Catholic Church influence on society’s approach to abortion?

The Church is significant in the issue. The abortion ban was implemented in 1993 as a result of the Church’s influence. It is against contraceptive methods and sex education in schools.

Do Polish women travel abroad to have legal abortions?

Some women do, but – according to our survey - most of them can easily get to the Polish underground despite the prices, which are comparable to Western ones. Those women who travel abroad to have an abortion tend to live close to the borders, and this is not a 'terra incognito' for them. They are wealthy, well educated women, who contact clinics via the Internet, going there for an abortion and holiday, at the same time.