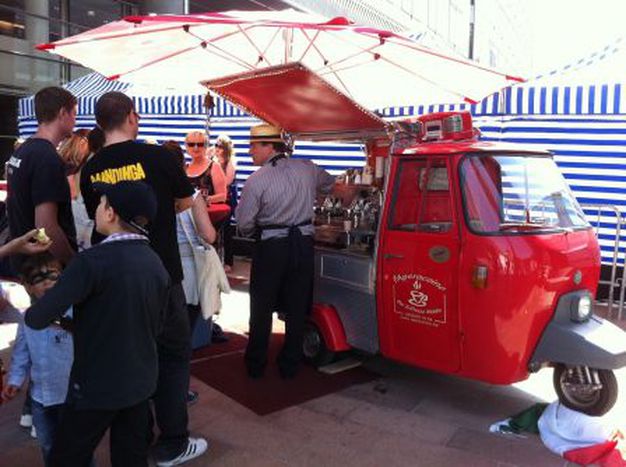 By Eva Donelli People sitting and tasting THAI specialties, jugglers on stilts, a quartet of “policemen” wearing blue fluorescent uniforms and yellow socks improvising clumsy choreographies, notes out of tune from a giant karaoke and a row of colorful stands all around the square: a country fair? Wrong. It is Place du Luxembourg on Saturday 7th of May going all Festival of Europe.

Institutions open their doors, visitors are welcomed, no badge required.

This is a Festival, organized annually, to commemorate the declaration of May 9, 1950, by Robert Schuman of the creation of a “visionary project cementing peace in Europe”, which led to the creation of what is now the European Union.

The European Parliament, The European Commission, the Council of Europe, the European Economic and Social Committee and the Committee of the Regions participate in the initiative opening their doors to offer visitors an opportunity to gain deeper knowledge about the way the Institutions operate.

A queue stands outside the European Parliament Altiero Spinelli entrance, and a man with a red wagon plays traditional songs from Naples and distributes free 'aperoccini'. Many people carry the EPP’s blue balloons: If you don’t know what EPP is just get inside the Parliament, there’s a lot to learn. As soon as you step inside, before passing the mandatory security checks, you get a passport, to be filled with stamps. There are 9 stands representing 9 Directorates General and you can do a quiz at each stand. “If you pass all the tests at DG COMM, DG PERS, DG INLO, DG ITEC, DG Trade, DG IPOL, DG PRES, DG INTE, DG EXPO, you will receive a prize at the end of the visit.” they promise as encouragement at the first stand. The goal of the quiz is to present the nine Directorates General to the public, and the questions range from politics to energy, innovation, logistics...

Although in some tests cheating seems to be allowed (controls are not as severe as the EPSO tests) you will definitely learn at least that there are 27 Member States, there are 23 official languages, that the most spoken mother tongue among MEPs (out of the three official languages) is German and not English, that 34.8% of Members are women, that the last two states to join the EU were Bulgaria and Romania (and not Switzerland!), and that Russia has not adopted the euro!

On the third floor of the EP buildings, you find various stands presenting the political groups, with tables full of informative brochures. You run into the blue one of the European People's Party (EPP Group),the largest in the European Parliament with 265 Members, where you get a blue mug and blue hat (only after reaching a minimal score at the test) and into the red and white Social and Democrats party stand, (S&D) where people enjoy flamenco guitars or paint with watercolors. Nothing is missing, from debates, exposure and children's corners. You can challenge yourself to be an interpreter using the professional cabins available or choose to take a picture with a life-size paper President Buzek.

This year's Europe Day was dedicated to the theme of volunteering, and most of the stands outside are of NGOs, though you can’t help noticing a couple of original stands, like the one “guarded” by a Nigerian Tuareg who sells jewelry and the one of the Campaign for European Democracy who campaign for the European Parliament to be based in Strasbourg. As explained by Tibor, a young activist of the group, "It would be better if MEPs didn’t’ work in Brussels, where they are subjected to the dangerous influence of EP functionaries and lobbyists.” All the discussions, he asserts, should be held in Strasbourg, where the Parliament would have greater independence and a more distinct voice, if far from the Council and the Commission.

In the meanwhile, a Romanian group strums from the stage and a colorful little train stops in front of the square, people get on and off: it is the free shuttle available only for a day: it will bring you to discover the other 4 Institutions.