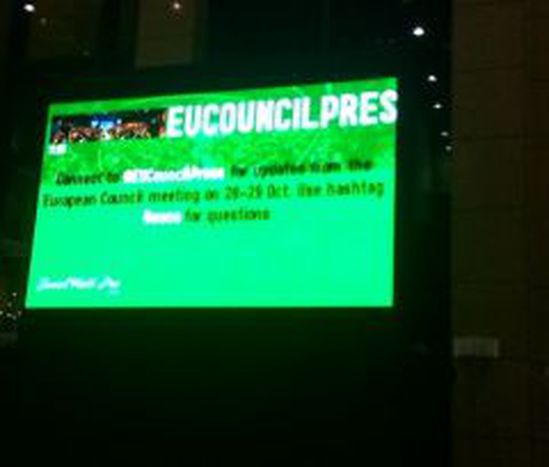 By Clémence Robin EU geeks, get ready, the European Council has come online ! From behind our screens and live from the Summit, here is the story of how Twitter invaded the euro space. It all started with the EU Careers Raconteurs’ project : Young EU officials sharing their experience on twitter and facebook. Among them, Dana, press officer at the Council.

She represents the driving force behind the increasing presence of the Council online. Blame her or love her !

After tweeting herself about her activities, it was time to launch the « first European Council meeting on Twitter! » . As a good president, Herman van Rompuy is to give the example and so be it : his first tweets start on 26 October 2010 so 2 days prior to the starting date of the meeting. Don’t get all excited : Herman did not get a crash course on the power of 140 characters (although his mastery of haïkus could serve him well) ; his account is managed by his spokesperson. Dana then pursued her 2.0 mission and brainstormed last weekend with the euro-twitter community to find a common hashtag for the European Council Summit. One winner : #euco.

The last step was then to create an official account for the Council press office, and there came EUCouncilPress on 27 October. H-24 : all is ready, let’s get started!

Big Tweetwall is watching you !

Throughout this summit, EUCouncilpress posted 54 tweets and Herman van Rompuy the honourable number of 11 tweets. Cafebabelbxl commented live with 9 tweets and live photos.

I personnally published 22 tweets and 2 retweets. But we can all agree that our most tedious twitteritos during those days were Jean-Sébastien Lefebvre and LB2S for Euractiv.fr. Of the 2 giant screens located in the main hall of the Council building, one turned into a Tweetwall displaying tweets mentioning the official euco hashtag. While EUCouncilPress took care of the usual official announcements (where to find what documents, are the heads of state still over dinner, when does Barroso and Rompuy’s press conference start, etc), the usual suspects from the EU-blogosphere gave out their personal views on the event. All tweets appearing were checked beforehand by the Council Press Office to avoid any insulting comments.

Throughout this night and day, I used twitter to get quick updates on the content of the decisions taken by heads of states, to keep in contact with my fellow journalists, to meet and talk to Dana, and of course to share this experience live with a growing number of followers.

No sooner published than forgotten, an online tool like Twitter serves journalists especially well when covering a long big event with many unofficial sources of information. The moment rules the game and any scoop, rumours, declarations is good to feed the press monster.

However, the reactions came mainly from the insider audience already sitting in the Council. It almost felt like a re-creation of our own CCTV on the web. Dana admits it still has to expand but let’s hope this first experience will trigger more attention for the next summit. All accounts are up and working and as a twitter-observer, I can only wish the best of luck to Dana in her mission !