Pavlos Georgiadis: An olive branch for the climate debate

Pavlos Georgiadis – a Greek biologist and activist – is a Climate Tracker, food writer, olive grower and social entrepreneur. He is the founder of the projects Calypso and We Deliver Taste, as well as the producer of the award winning documentary Farming on Crisis. Through his many initiatives he seeks to bring people together to solve the climate debate.

One week after his participation in the annual olive harvest in his village of Makri, near Alexandroupoli in Greece, we met Pavlos Georgiadis at Place To B, in Paris, where he is acting as an observer of the COP21 negotiations.

Recently, he is increasingly working from the inside to promote climate awareness. "Our target is twofold," he explains, "On the one hand we want to show that we are actively engaged with the negotiations and on the other we want to communicate to everyone – in a simple way – what's happening at COP21."

Pavlos is a graduate of the University of Edinburgh with a BSc in Biological Sciences and an MSc in Biodiversity & the Taxonomy of Plants achieved in the Royal Botanic Garden, Edinburgh. He moved to the University of Hohenheim in Stuttgart, for a second MSc in Environmental Protection & Food Production. He also has a PHD in Rural Communication. "If people like me do not have our feet on the ground and our heads in the sky, we do not reclaim what we deserve, and it is taken from us," he explains, "Then we cannot expect either peace or safety." 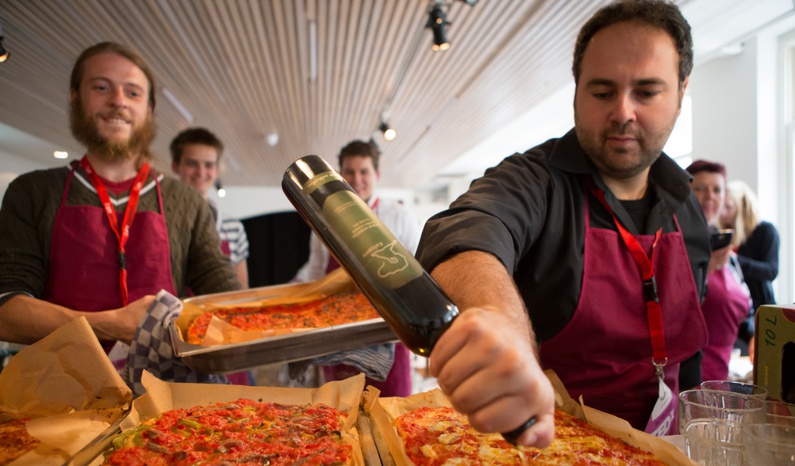 His career choices are a direct result of his on-going contact with nature. "My parents own one of the oldest traditional olive groves in the Mediterranean," he declares, "Exposure to nature has always been part of my life, it is a relationship that helps characterise my identity."

After 12 years abroad – working as a researcher in several countries around Europe, Asia and India – he returned to Greece in 2011, when his country was facing a severe financial crisis. This situation never stopped him achieving his goals. Instead, he actively contributed to social issues.

The contributions of Greece to the on-going negotiations disappoint him. "In Greece we are socially vulnerable," he explains, "so our current level of participation is not the appropriate response. Unfortunately, climate change is not part of public dialogue – there is no activism – and I am not surprised that we are absent from negotiations."

Even if some people in Green were at first afraid to change, he knew that action was the only solution. That's why he decided to be the change himself: "When I was in our olive grove I was thinking about how agro-ecology and regenerative agriculture is a way to decrease atmospheric CO2. This is the purpose of climate activism within the negotiations. Our job as activists and producers is to try to encourage greater scope for that kind of agriculture. This is how we will achieve both adaptation and mitigation. I wish, as a member of Climate Trackers, to reclaim my knowledge and practices, so they can be used for climate change and climate justice."

His expectations are for Paris to become a milestone that leads to climate consciousness all over the world, including Greece.  "Our generation has only one opportunity to reconnect with earth," he explains, "If we continue to live like this, we will need 3 planets, but we have only 1. Civil society and individual behavioural change are maybe the only solutions to these recurring problems."

Pavlos end our interview with a call for everyone to find a way to contribute simple solutions that will lead to both an economic and humanitarian recovery; whether it be in their homes, villages, neighbourhoods, or countries. Climate change extends beyond national borders; it is humanity's shared mission. "Let's use the great evolutionary gift of thought that we've been given, the power of kindness and of listening. Let's learn from each other and work towards improving our world."

This portrait is part of our #21faces project in the run-up to the world climate summit COP21 in Paris. Interview conducted by Despoina Kiltsopoulou.