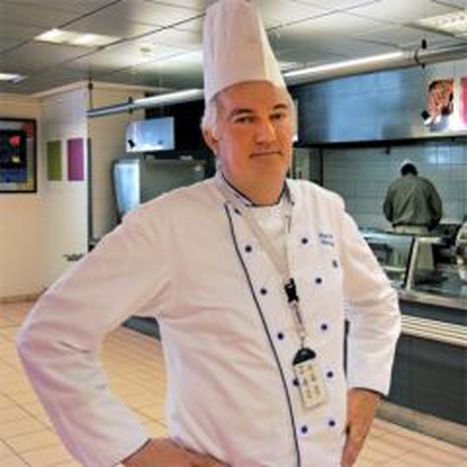 Paul Peigné, the most European of head chefs

by Aurélie Feller, translated by Catherine Castledine Spanish, Italians, Estonians, Danish, Germans…every day, between 4000 and 6000 busy people have lunch at the European Parliament. And they all want to eat something they like. Paul Peigné, chief executive of the Parliament’s enormous kitchens, works hard to bring the tastes of all 27 nationalities to the table.

The Erasmus of chefs and flavours

On the menu, there’s mushroom and herring salad, stuffed escallop of pork, and honey cake for dessert. This week, Lithuania is the theme of the European Parliament’s menu. It’s a way to highlight the little-known east European gastronomic tradition ahead of the country’s national day. For Paul Peigné “each country has its highlights, there’s always excellent recipes to be found”. Paul will soon be joined for a whole week by a Hungarian chef as part of the country’s EU presidency semester. As well as cooking goulash and other traditional dishes, he’ll teach Belgian chefs how to prepare Hungarian food themselves. A Belgian chef will then spend a week in Hungary.

From July first, it will be Poland’s turn – both for the EU presidency and in the Parliament kitchen!

27 holidays on a plate

An inquisitive chef, Paul Peigné describes his cooking as “traditional, with a local touch”. This epicurean from Nantes thinks all culinary traditions are worthy of his attention. But Mediterranean cooking, he admits, is often the best received. Fishing for new ideas at embassies and tourist offices is part of his job. The aim is to teach people about different culinary traditions with a daily show of food and events. He must be creative, whilst making sure his menus are nutritionally balanced and healthy. He proposes a broad range of side dishes and seasonal vegetables – preferably, and at least every Thursday, the menu is 100% organic. For Paul, who’s been in the job eight years “each day brings a new challenge.” And if he had to chose just one dish to please everyone? The chef replies without hesitation – a mixed grill.