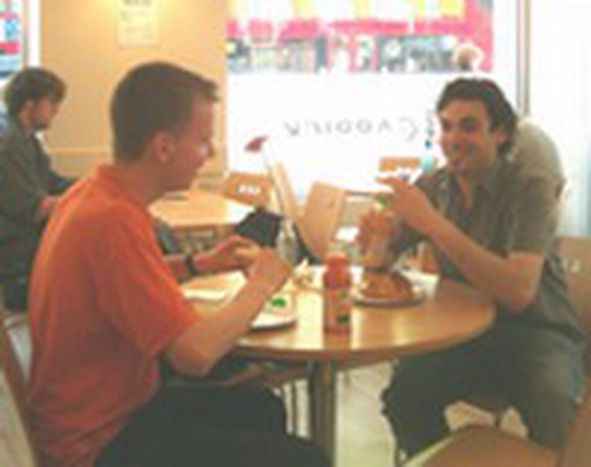 In the midst of his European tour, Irish-Iranian stand-up comedian Patrick Monahan takes a break to share his comic insight with cafebabel.com

Some people realise from an early age onwards that they have a calling. For some, this calling is religious, for others, it takes the form of politics or business. For a select few, it is centred in the glamorous world of entertainment. Patrick Monahan safely belongs in the latter category. Coming from an Irish father and an Iranian mother, the laws of nature just about guaranteed that Patrick was set to be a bit of a joker. 'Irish people are renowned for being great talkers,' he says. 'Iranians make these huge arm movements. I have both these elements in me.'

And so he does. When we start chatting away in a cafe in London, Patrick erupts. His arms take on a life of their own. Their spastic movements orchestrate his words, a verbal freefall which is guaranteed to strike any observer like a whirlwind. No wonder critics compare his energetic stage performances to a professional boxer in the ring. Yet his enflamed speech is also compelling. When we touch upon his youth in England – he came here from Iran when he was 3 years old – Patrick directs the conversation towards his childhood role model: his talkative dad. 'I remember my dad sitting on a chair and just chatting away non-stop. He was able to respond to any topic whatsoever, he had a story ready for everyone. Through him I began to realise I also wanted to be an entertainer.'

Little Patrick was inspired, but not yet able to actively pursue his new-found passion for drollery. 'My folks wanted me to go to college and study. My mother wanted me to follow my brother or sister into law or accountancy,' he sighs. 'But she later realised as I got older that I was better off being in entertainment or comedy. Basically, she knew I wasn’t as academic as my siblings and that I was less serious about life. Also, I it was a lot harder to get me out of bed in the morning before 10am!' As an adolescent, Patrick decided to press his luck and sign up for a comedy show in London. His first ever gig took place during an open night in the Purple Turtle pub. 'I had some jokes written on paper I’d prepared beforehand. I remember going into the club and sitting next to a couple of tourists who didn’t have a clue what was going on.'

Nevertheless, he ended up on stage and greeted the unsuspecting ‘crowd’ with a warm ‘Hey!’. 'I proceeded to go through my material in bullet speed. I literally didn’t breathe in those whole seven minutes. I loved every minute of it, but my audience wasn’t too impressed. I’m sure the organisation thought I was some kind of lunatic!' That’s when Patrick learned one essential ingredient of a good comedy performance: timing. 'It’s really important to insert breaks during your act, it doesn’t really matter where. Punch lines are a bit of a myth: anything can be a punch line. Just make sure to gradually inflate the attention of the audience, then stop and deliver the revealing words!'

Everyone can do it

Other tips for budding comedians he neatly summarises with four verbs: tell, exaggerate, recreate, include. When it comes to devising jokes, make sure to be a close observer of real life. 'In theory everyone can do comedy, even bad speakers,' Patrick assures me. The international comic’s own sense of humour is as universal and mainstream as possible. Patrick notes that the market for comedy has become ‘truly global.’ 'The gulf war, Americans, McDonalds – these jokes work everywhere.'

Initially, he did not have to look far for a vast source of comic inspiration. Patrick’s mixed background, something which he takes pride in, is dominant in his treatment of contemporary geopolitical conundrums. 'When the neighbours argued we'd call in the police. When me parents argued we'd call in the UN,' he jokes, before becoming more serious: 'When people look at 9/11, Iraq, Northern Ireland and all these other conflicts, you often hear them talk about this east-west chasm. But I believe there is a future together. Just look at me, my own upbringing shows that we can build bridges.'

I ask Patrick about the different crowds he’s encountered whilst travelling through Europe. He goes on to list his findings about different nations ‘laughing muscles’: 'The Germans like their physical jokes, like stunts on BMXs and stuff. Then the French, they favour political humour. They’re a really polite crowd as well; they’ll recognise a joke and respond with a steady clap. The English I encounter tend to be mental, especially when they’re drunk. The Greeks hardly understand a word of English, so a lot of what I did was physical.'

The plurality of audiences means Patrick always has a ‘plan B’ ready, in case his puns don’t get a laugh. 'If this happens, you should continue immediately, as if it was part of the plan. Just shift the attention and ask a question to someone in the room, like ‘what would you have done?’' Still, even the comic himself isn’t sure whether this emergency-routine would work in his mother land Iran. 'I would love to do a show there. But that would probably be pretty difficult nowadays. Also, when entering the country I would have to serve two years in the army, because of conscription. Still doing my final show somewhere in Iran would be a great ending!'