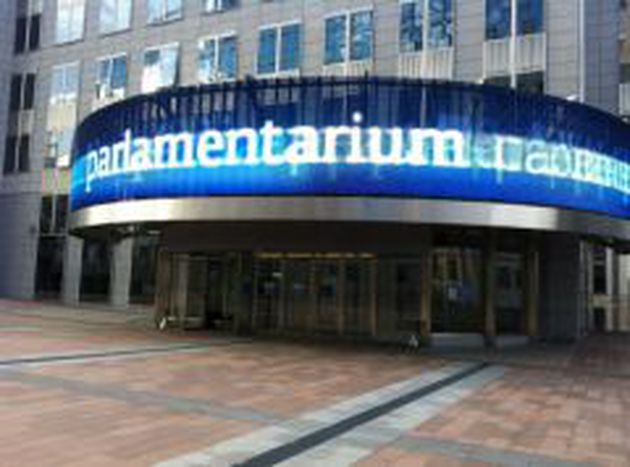 Parlamentarium: the visitors’ centre of the European Parliament

Who sits in the Parliament? Within which political parties? How many female deputies are there? What topics are discussed during the sessions? In what context the European Union was created? If you ask yourself all these questions, the Parlamentarium is for you.

Opened in October 2011, it is the new visitor’s centre of the European Parliament. Its objective? To introduce the EP and the influence of its decisions in our daily lives, in a fun and interactive way.!!!

A security check waits at the entrance. As in every European institution, you empty your pockets, place your bag and jewellery in a tray and pass through the metal detector. Once inside, you receive a multimedia guide. Slightly larger than an iPhone, it provides a guided tour of the centre. To activate it, you just have to approach it to small terminals representing a key. Audio, photographic and textual content is then released. Before introducing the Parliament, it must be mentioned the way in which it was created. This is why the visit begins with the story of the birth of the European Union. Walking along a time line, we learn that after World War II, several countries were willingness to work together, instead of making war.

The lights of Europe

The path is represented by the illumination of great people that have marked European history. We can learn more about writers like Victor Hugo, Franz Kafka, Astrid Lindgren (creator of Pippi Longstocking), artists like the famous Greek singer Maria Callas, or of the great names of science such as Albert Einstein or Marie Curie.

A really interesting step is the room "United in Diversity." A huge map of the European Union is drawn on the ground. Thanks to large scanners, it is possible to move to different cities in Europe. Then a video about a particular aspect of the city comes up. Thus, it can range from Turku, a major city in Finland where the majority of population speaks Swedish, to Budapest, where the European Institute of Innovation and Technology is situated, via Brussels, where the headquarters of the European Commission are located. However, what impresses even more visitors, are the two large rooms of 360 degrees. One of them is a virtual hemicycle. Several touch screens allow us to follow the debates or to know more MEPs, giving the impression of being there.

For citizens and children

More than a source of information, the visitor’s centre is a call for the engagement of the citizens. Throughout the visit, their opinion is required on the issues discussed in Parliament, for instance, "Should Europe develop a common defence policy?” At the end of the course, a terminal asking "What do you expect of Europe?" allows visitors to express themselves. The Parlamentarium is not just for adults. The visit is also accessible to children. The terminals offer a simplified version of the information. A section "What the Parliament does for children?" is also addressed to them. In addition, the visitor’s centre organises a role-play for youngsters aged 14-17 years old (http://www.europarl.europa.eu/en/pressroom/content/20110920BKG27002/2/html/The-role-play-game). For two hours, they can slip into the skin of MEPs to discuss legislation and amendments, and finally to vote it.

With a budget of 21 million Euros, the EU did not skimp on the means. Covering an area of 5400 square meters, the size of a football field, the Parlamentarium shows nearly 1400 photos, 90 videos and 100 interactive displays. 1656 litres of paint, 80 translators and a period of more than 6 years were needed to create the centre. Open since October 14, it hopes to welcome 450,000 visitors a year.

Admission is free and the centre is open almost every day of the year. http://europa.eu/take-part/visit/european-parliament-visitors-centre/index_en.htm