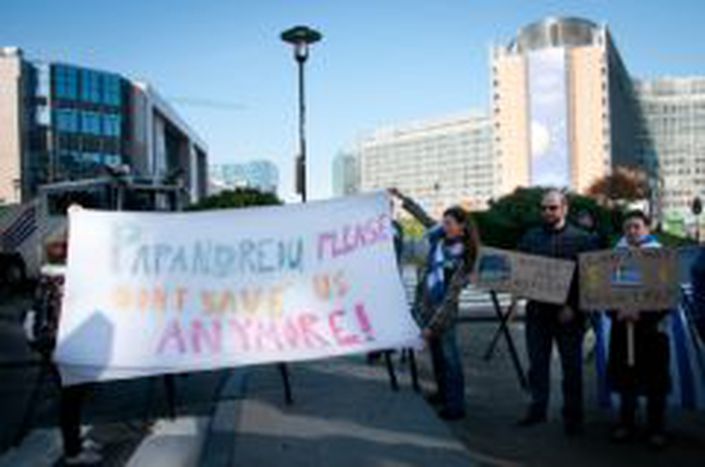 "Papandreou, please don't save us anymore"

While the European Council discusses solutions to the Greek debt crisis (and of the entire euro area), a group of protesters stand on the other side of Schuman roundabout, a handful of Greeks, along with fifty other outraged Europeans, fighting against austerity measures demanded by the International Monetary Fund and

They have set up on the other side of Schuman roundabout under the watchful eye of a water cannon belonging to Belgian police officials. About sixty people are gathered to protest against the austerity policies. Behind barbed wire barricades decorated with flowers and dollars, the Greeks are taking over the pavement.

"We are here to demand an end to corruption in our country. It is often said that it was the Greeks who are corrupt... and then no, it is the politicians, the rich and their friends" two friends, present since 9:00 this morning, tell cafebabel. "We, if we work, we pay our taxes." Thumbing a nose at the stereotype of the Greek people not paying tax.

Behind them, stand the outraged. Just like the European Council, they are having a meeting. They also want to save the euro, but in another way. Like the EU, they have a translation service. And like the EU, some do not really know why they are there: "We must return the list of grievances to the European Parliament ... or is the Council?"