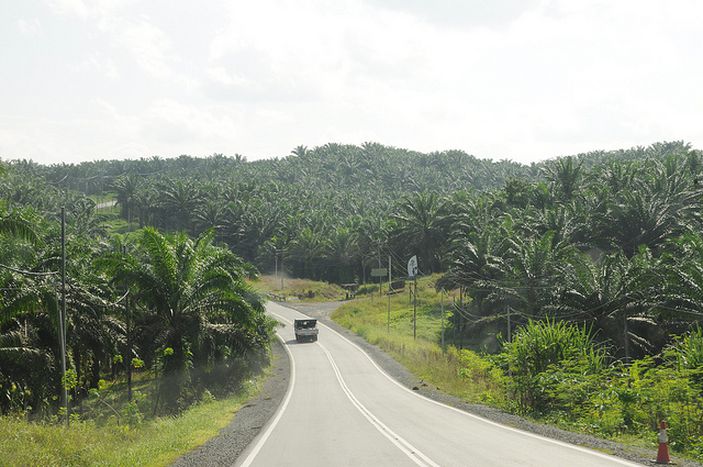 The 6th edition of the Festival AlimenTerre included several documentaries about food production around the world. One of the films “La Fiebre de La Palma” talked about the plight of the Ecuadorian farmers in the situation of the expansion of African oil palm plantations. The consequences of which lead to the destruction of the environment and impoverishment of the local population.

La Fiebre de La Palma translates as ‘the palm fever’. I believe the title explains the idea of what has happened in Ecuador. The areas where plantations are most widespread are some of the poorest is Ecuador. The local farmers who own land have leaped at the opportunity to get rich fast without considering the consequences.

The African oil palm (Elaeis guineensis), is a species originating from southwest Africa. Due to high demand it has been spread to suitable plantation areas around the world. The film explains that the idea of growing oil palm in Ecuador was first introduced in the 1960s by businessmen from the United States. Prior to this 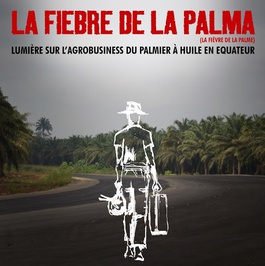 the species had been foreign to Ecuador. Ever since the 1960s it has been a way for people to earn quick money by selling their lands to big agribusinesses or by trying to cultivate the oil palm on their own. Selling the land results in the loss of income in the long term and the impoverishment of the rural population. When poorer farmers try to cultivate the African oil palm on their own they barely earn enough to live on and to cover the costs. The reason for the latter is that the plantations require a lot of investment into seeds, chemical fertilizers and pesticides, which are used to help grow this foreign species. In addition, the oil palm is an intensive monoculture. Growing this in delicate ecosystems exhausts the land in a few years leaving it barren. All of this proves that this is a species that should not be grown in Ecuador at all as destroys the people’s possibilities for food sovereignty in the long term. According to the views expressed in the film there is no ‘sustainable way’ for any large scale production of palm oil in Ecuador.

Before the arrival of the African oil palm plantations people were growing traditional crops which did not make them rich, but assured their clean living environment and long-term survival. One of the traditional plants grown in Ecuador is cacao, which has been renowned the world over as being of excellent quality. Now some farmers have given up on traditional ways such as growing cacao and grow oil palm instead.

The viewing of the film was followed by a debate on the topic:

Could food security in the North leave the food sovereignty in the South in peril?

Many relevant questions were posed to Antoine Cusset, one of the authors of the film and Luc Vankrunkelsven, an advocate for responsible agriculture. The answers of the two experts complemented each other to give advice to the viewers.

Antoine Cusset, a tropical agronomist by education, was asked about his opinion of what people in Europe could do in order to help to change this situation. According to Cusset, it would make sense to boycott some import products in order to stop the undesirable way of producing them. He claims that those local communities in the South would be able to revive sustainable traditional agriculture if they were given a chance. Cusset admitted he cannot force anyone to follow his example, but assured that in the long term it is healthier and more sustainable for everyone to eat local and seasonal products. Antoine Cusset encouraged people to believe that everyone can make a difference by the choices we make. 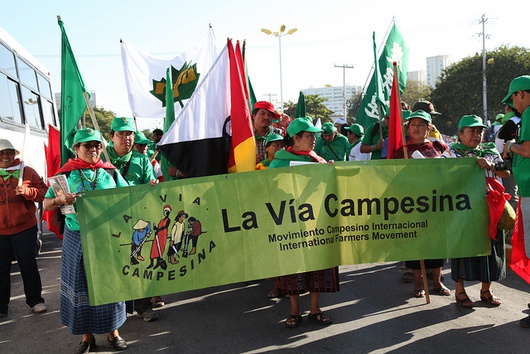 Luc Vankrunkelsven, wanted to draw our attention to the amount of lobbyists in Brussels. According to him, it is one of the few places in the world that has around 20 to 30 thousand lobbyists working for large multinational companies. They try to influence the legislation and decisions of the EU regarding agricultural practices, neglecting the fact that this leaves many people in the southern hemisphere in very precarious situation. Vankrunkelsven is a advocate for the movement of Via Campesina, that supports small scale sustainable agriculture. He assures that there are alternatives for the way we produce food now. His advice to the viewers was to be more political and more aware of the world. This is necessary to make structural changes. None of the plants grown in the world are themselves the culprits. The fault is in the process of production and the disregard to the consequences of monoculture farming. There are alternatives and ways to reduce the impact on the food sovereignty in the South.

When we look at list of ingredients on many of the products in our European supermarkets we cannot escape but see palm oil over and over again. Palm oil is the leading imported vegetable oil in the EU, used for the food and chemical industry. The total amount of palm oil imported to the EU from many developing countries is significant. According to statistics by Fediol, the federation representing the European Vegetable Oil and Proteinmeal Industry, in 2012 the EU27 imported just over 5 million tons of palm oil. In 2013 this number has grown to over 9 million tons. The portion from Ecuador is small, but significant. According to a report by CBI (Centre for the Promotion of Imports from developing countries), a government agency from the Netherlands, 68 thousand tonnes of Ecuadorian palm oil was exported to the EU in 2012 making it an important destination.

*For more information about the Festival AlimenTerre