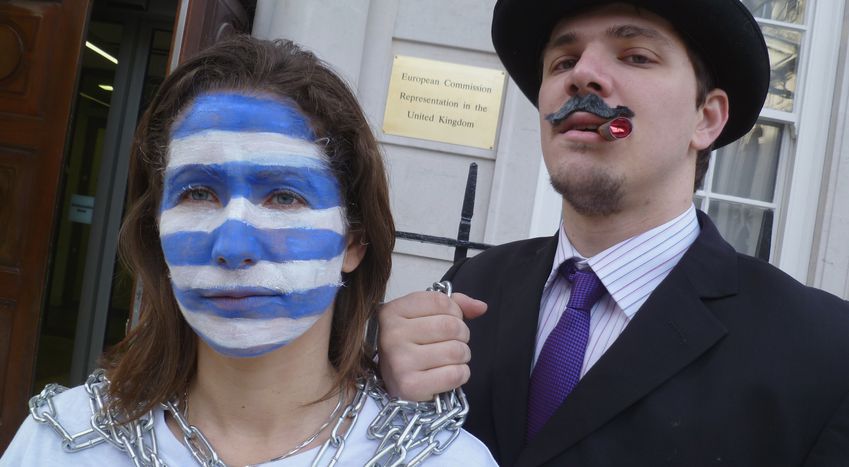 Opinion: why I'm voting No in the #Greferendum

I was born to Greek parents in Canada and grew up in the United States. When I was 13 my family moved to Greece. Form the age of 13 to the age of 43 – for 30 years – I lived in a country I grew to love. To redeem its values, we have to vote "No" on July the 5th.

I studied, worked, travelled, married (twice) and had two children… without ever cheating or stealing or snatching rights and special privileges from others. I worked with passion; I became financially independent and built a career in the profession I chose to follow. And finally I reached a point where I was proud of the way my life was going and the principles that had led me along the way; and I conveyed these principles to my children.

Then Prime Minister Georgios Papandreou and his “socialist” PASOK came along, famously telling us that “the money exists”, before going on to win the 2009 election. But a few months later, on April 23th, 2010, from the remote island of Kastelorizo (an image I’ll never forget), he announced to the Greek people that there was no money and that we would be receiving a bailout from the IMF to avoid going bankrupt.

A year and a half later, Papandreou was brought down from his position as PM and an unelected Prime Minister (Papadimos) took his place. And so began the dismantling of democracy… After the 2012 election, the formerly “anti-memorandum” Samaras (i.e. being against the loan agreements between Greece, the EU and the International Monetary Fund) joined forces with other formerly anti-memorandum, albeit power-hungry, politicians from an even more extreme right-wing party (Adonis Georgiadis from LAOS) and the "Left" (Fotis Kouvelis). Together they began the dismantling of society, under the blessing of the EC-ECB-IMF.

Furthermore, I found my salary slashed by 40% (the same happened for my husband, only he’s now been unemployed for 7 months). In a dead market, even the slightest chance of earning extra income from translations was eliminated; an occupation I legitimately exercised for years (with all the necessary financial statements, VAT etc) before being appointed as a teacher. At the age of 45 I couldn’t afford the flat I was renting with my second family anymore, so we moved into my parents’ home.

And we counted our blessings for actually having a house to move into, as many others in our situation did not have this “luxury” and ended up homeless. We soon got used to our new living situation, and continued our hardworking, honest lives… but now our anger against the "leaders" who have thrown us into humiliation and constant compromise – always with the blessings of the EC-ECB-IMF – is raging.

And I searched, and I read, and I have reached my conclusions. And on Sunday I will cast a furious "No".

After everything they have stolen from me, our so-called 'friends' are now trying to rob me of my dignity. It’s the last thing I have left, and I refuse to hand it over to them, and I don’t care if that means we’ll be kicked out of the EU and the Eurozone. The one thing they can't do is kick us out of Europe; geography and culture are much stronger than the hypocrites of the European (dis)Union, who tread down on fundamental human rights and ideals in the country that gave birth to the continent's very name.

The mainstream media have been bombarding us and the world with images of people queuing at ATMs to withdraw their daily 60 euro “capital control” limit, in an effort to convince us of how tragic the situation in Greece currently is. What I know is that people queuing in line for free meals is a much more tragic scene, and it’s been going on for years… These people couldn’t care less if there is a curfew on withdrawals, quite simply because they have nothing to withdraw. This is certainly not the first instance in history when Greeks have had to rise to challenging circumstances, and the "No" road is certainly a bumpy one.

But we owe it to our ancestors, who never hesitated to heed the call for democracy, liberty and national sovereignty over and over again. We owe it to our children, who carry a debt burden from the day they are born in a country ridden with cruel austerity and injustice. And we owe it to the victims of this crisis, who have buckled under the despair and took their own lives. We’re in for rough time but with our heads held up high for a Noble cause.

Mina blogs in Greek and English at Agrypno Coma