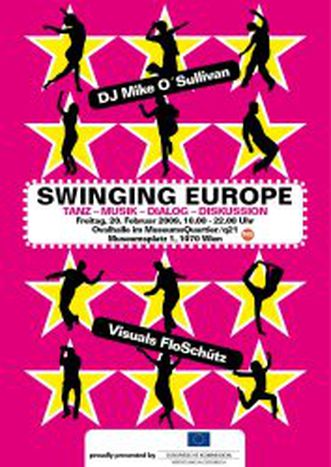 One and a half hours flying time and yet light-years apart: Vienna – Brussels

Youngsters and political experts discussed the future of the European Union By Verena Schiefer. Translated by Stefan Fersterer and Alexandra Skwara. The Austrian Euro-scepticism cannot be considered  a well-kept secret.

A person transforms into the star of  business small talk and the hero of regulars’ tables as soon as he/she rails against “those people in Brussels” and shows an indifference towards  common European policies. Moreover, you will never run out of topics of conversation since there is always something to complain about.

The panel discussion “With drive for Europe” ("Mit Schwung für Europa", an event organized by the Austrian public TV channel ORF and the newspaper STANDARD) aimed to listen to  youngsters’ attitudes towards the EU and to get a sense of their primary questions and contents. The Austrian Benita Ferrero-Waldner, EU-Commissioner for External Relations, and the political scientist Peter Filzmaier responded to the critical questions of young panal participants and the audience.

Good news: In 2008, half of Austrias’ young people had a positive image of the EU and considered it as developing in the right direction. By contrast, the great majority of the population still shows a passive indifference or even a profound aversion to the European Union. Some of the stated reasons in the survey: Austria is often considered  too small  to have a real impact in the EU; the institutions are just an abstract bureaucratic construction; disadvantages on the labour market are often linked to the EU. These causes for the Alpine Euro-sclerosis were reaffirmed in the panel discussion as well as the aspect of the EU as a peace project which constantly loses its obvious positive significance for the younger as well the older generation: Peace is just taken for granted. But how is it feasible to create a positive European spirit in a country where national politics is consistently Euro-sceptical and where, as Commissioner Ferrero-Waldner states, politicians usually blame Brussels for negative impacts and claim positive outcomes as exclusively implemented by themselves?

‘The EU has to act in a more populist way’, a discussant traces the typical methodof communication of the Euro-opponents. The positive impacts of the EU in daily life have to become more concrete and should be spiced up with personal stories of citizens. This suggestion appeals to the panel discussants and is combined with the request arising  for an increase in bottom-up communication. Narratives with identification potential and possibilities for direct communication create a face for the EU and spark interest for more.

Everybody has already heard about the EU’s cucumber shape regulation, though apart from this the state of knowledge about the EU  reaches a rather modest level amongst young people. ‘There is a huge lack of information on offer beyond the capital Vienna’,  complains a grammar school pupil from Lower Austria. However, her Viennese peer calls for  personal responsibility to get informed and refers to the wide sources of digital information . Political experts and students completely agree on the urgent need for a substantial interdisciplinary European education scheme in schools. A common multilingual TV channel with easily-processed reports about European issues as well as  strengthened visibility of local projects which are (co)-financed by the European Commission were  amongst further tpocs raised .

The lively discussion brought about an obvious conclusion: the main recurring challenge in Austria is to anchor European opportunities and benefits beyond low priced mobile tariff rates and low cost airlines. Creative methods of information transfer and positive emotional connotations of the EU shall be developed in order to transform the phrase “I am European” to a strong statement across all layers of society.