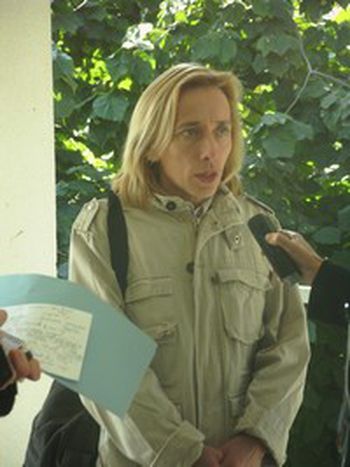 Oksana Chelysheva, information at the service of democracy

Journalist and Human Rights defender in and around Chechnya, the assistant director of the NGO the Russian-Chechen Friendship Society (RCFS) talks openly about the reduction of liberties in the Russian Federation, and the EU attitude of the conflict.

"If a conflict is seen from an informative point of view, then we are facing a premise for its peaceful solution.” Pure journalistic political activity. The words of Oksana Chelysheva are as clear and convincing as her look. “Our mission is to tell stories.” Violations of human rights. Disappearances. Threats. Stories against oblivion.

Since the RCFS was founded in 2000, the life of Oksana has become a tireless pilgrimage to report the situation of the Chechen Civil Society and to attract the attention of the international community. Ireland, the UK, Austria and Denmark have been some of the destinations in the last few months. Her visit to Seville in February coincided with Putin’s official visit to Spain. Oksana kindly saw us in a break between the scores of interviews she gave in just a few days.

Chelysheva denies that the Chechen conflict has just become one more on the list of thousands of 'forgotten conflicts' that are no longer on the agenda of the media or the international community. The Russian-Chechen Information Agency (RCIA) and the newspaper Pravo-Zaschita (Defense of Rights) started at the same time as RCFS, with the intention of providing ‘real information’ as an alternative to the huge campaign of official propaganda “that championed the second conflict in Chechnya and terrorized civil society”.

All of this from Nizhnii Novgorod, where the headquarters of the NGO are. “We are a multinational organization. From Ingushetia, Osetia, Russia or Chechnya itself, our work consists of gathering information and making it public.” So easy and yet so complicated, because “any attempt to publish information about what happens in Chechnya is seen by the Russian authorities as a threat to their existence,” she says.

Freedom of speech against repression

The response of the government of the Russian Federation to the work of the RCIA has not taken long. A couple of years ago, the campaign of persecution and harassment of the Association took a worrying turn. After the tight personal and telephone surveillance that many members of the organization suffered, and with threatening leaflets distributed in Nizhnii Novgorod, the final turn of the screw has been the criminal prosecution of the editor in chief of Pravo-Zaschita, Stanislav Dmitrievski. In a trial held last January, at which representatives of organizations defending Human Rights were prevented from entering, Dmitrievski received a four year suspended sentence. The ‘crime’ being the publication of two articles written by the ex Chechen separatist leader, Aslán Masjadov, and his correspondent, Ahmed Zakaev, in which they made an appeal to the European Parliament.

For Oksana, “the persecution of the NGOs by the Russian authorities is the third step in the strategy of attacking civil society. The first was the control of the mass media; the second, the attack on the business world with the imprisonment of Jodorkovski, finally, the controversial amendment of the laws that regulate the activity of these organizations in Russia”.

The law was published in the official newspaper Rossiiskaia Gazeta on the 17th January 2006 and will come into force in April. In accordance with this law, the authorities will be able to refuse to register any civil society organization whose name “offends public decency or religious or ethnic feelings”. Furthermore, they will have the power to inspect without notice the sources of finance in budgeted and actual spending.

“The Russian authorities are frightened of the NGOs because of the “orange revolutions” in the Ukraine or Georgia and they have decided to put an end to any incipient incidents.” For Chelysheva, the prosecution of her colleague Dmitrievski represents a “dangerous precedent”, but above all a message about how Putin’s government plan to put into practice the controversial amendments.

The case has led to the approval of a text by the European Parliament. In the “Resolution of the situation in Chechnya after the elections and the civil society in Russia”, the Parliament “states its concern over information that gives testimony to the administrative and judicial harassment suffered by some of the NGO activities in Chechnya, a phenomenon that, apparently, forms part of a more general process which threatens the freedom of speech and association in the Russian Federation, and urges the Russian authorities to put an end to this harassment”. Also, “we ask that all charges against Stanislav Dmitrievski are withdrawn and urge the Russian authorities to respect the freedom of the media and journalists.”

The need for European Union involvement

Oksana emphasizes that the Chechen conflict “has now flowed over the borders of the republic and spread over all of North Caucasia”, and she disapproves of the “tepid” response of the international community, especially that of the European Union. Chelysheva doesn’t hesitate to criticize the “cynicism” with which the International Community is facing up to the situation in Chechnya, at the mercy of the weight of the “gas arguments” used by the Russian government.

“It is necessary to establish a strong position because an unstable Russia is a threat to Europe”, she points out. Oksana is convinced that now is the time for European society to start “asking questions and to become aware of the situation”. The journalistic task is a brave social commitment for Oksana Chelysheva: that of putting information at the service of democracy.