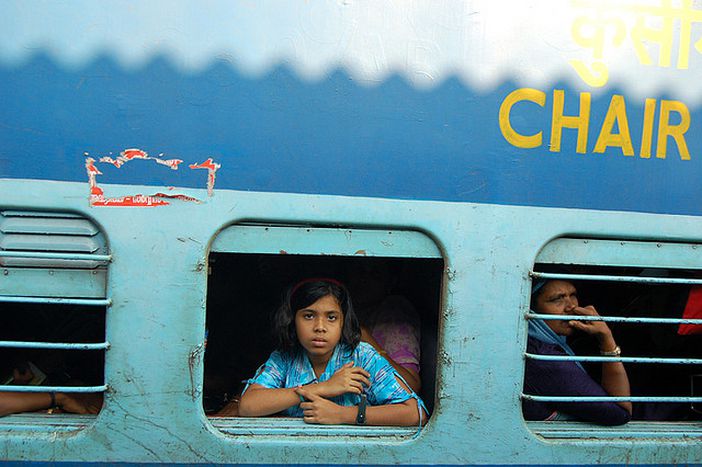 “I can see the colour of your aura, but I can't tell you.” With a smirk on his face, Karim leans back into his seat, fully aware of the deep impression such esoteric talk can make on unseasoned India travellers. “You have a very pure soul, I haven't seen anything like that in a long time!”

While I still wonder if he will want money for this pseudo oracle or if he is just eager to practice his English, two fighting little boys bump into the chai wallah right next to me. With sticky sweet tea all over my legs, my soul feels a lot less pure and I am about to make a scene. But as that wouldn't change the situation in the least, I calm down and try to wipe puddles of hot chai off my seat.

Fights and collisions are not unusual on the Malwa Express to Indore which, according to the timetable, should have already left New Delhi Railway Station an hour ago. For no obvious reason, we are still staring at the dirty red corrugated iron sheets on the siding, listening to monotonous loudspeaker announcements. “The Malwa Express number 12920 from New Delhi Railway Station to Indore Junction will leave this station with a delay of two hours.” Most passengers could only be pleased with that because more than half of them show up on the platform at least half an hour late. After storing their ten thousand suitcases, bags, metal cases and kitchen utensils in the baggage racks, they keep bustling around for a while before finally settling down on their appointed seats. 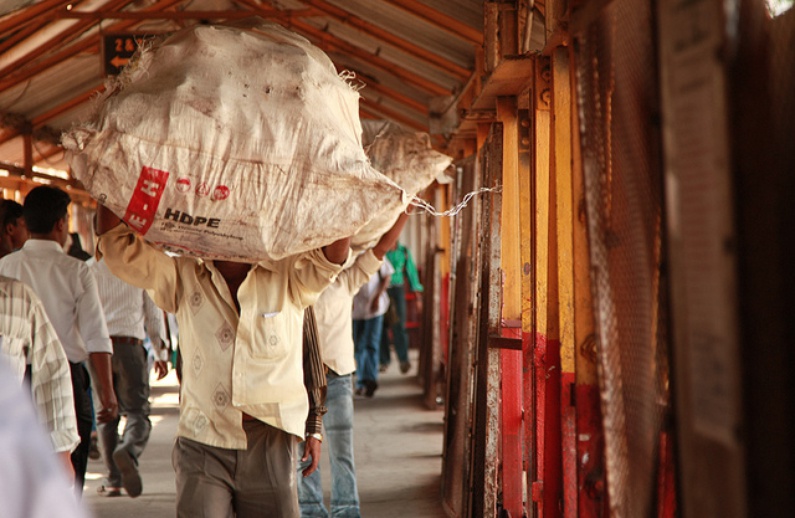 On my left, an Indian family – father, mother, grandmother and two kids – occupy a single seat. Next to them, a young man in flares is jammed against the barred window. Opposite me, my new “friend” Karim is lazing on his seat, next to his daughter and a chubby older man who whiles away his time chewing and spitting paan. In the aisle to my right, covered in peanut shells and plastic bags, ten more passengers have installed themselves for the journey.

In a sleeper class carriage, the Indian version of the European sleeping car, this situation is far from unusual. If you want to invest more money into comfort, you can choose between six more luxurious classes: with or without AC, with or without clean sheets, with or without complimentary meal. Only second class unreserved is even more of an adventure than sleeper class, but not the best choice when it comes to night trips. With around 500 passengers per carriage, it is not always easy to ward off amorous attentions. In India, the practice of softly touching and rubbing an unknown woman's arm, leg or shoulder on public transport is called eve teasing and is severely punished, but that still doesn't prevent men from trying their luck on a white thigh. However, the risk of being eve teased is a lot lower on sleeper class because along with the reservation, every passenger is assigned a private sleeping berth which are blue, sticky and convertible. There is no such thing as a private compartment on a sleeper class carriage, everyone retires in groups of six and is therefore almost inevitably drawn into family parties or political discussions. 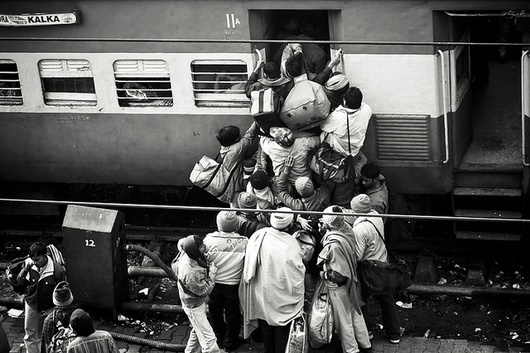 A train ride with Indian Railways is never fast or relaxing, but more like a visit to the circus. To your right and left, the other passengers will laugh, fight and swear at the top of their voices in Hindi, Urdu, Bengali, English and ten other languages; industrious chai wallahs will let their chai calls ring through the carriage every three minutes; unfriendly railway employees will sell their mediocre thalis; emaciated old men will offer you crisps, sweets and soft drinks and every half hour the train will stop for a while and no obvious reason in the middle of nowhere. A three to five hour delay is nothing to get worked up about. “If a train pulls into the station on time, that only means it is 24 hours late,” says Karim. In the meantime, he has already read my palm and predicted a future with a rich husband and many children. Laughing, I try to make him understand that I am not the one to fall for such magic tricks. However, my incredulity doesn't influence his good mood in the least and he even insists on buying me a thali. As the railway employee piles little plastic bowls with sticky rice, two types of sabji (curried vegetables), watery raita (yoghurt), yellow dhal (lentil soup) and crumbs of chapatti (bread) onto a tray on my lap, I suddenly don't feel all that hungry any more.

How to get some sleep on an Indian night train? Read on.