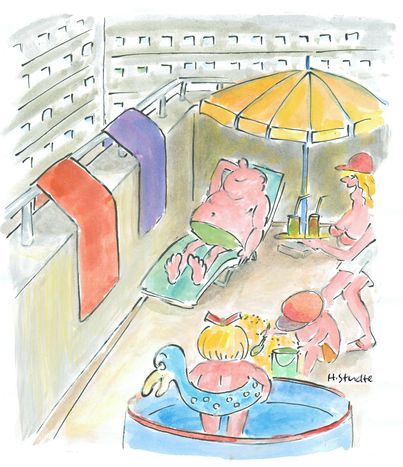 Not going on holiday? You're on 'staycation'

It seems an eternity, but the financial crisis is only just celebrating its second birthday. The US has spawned a side effect phenomenon, a neat little neologism called the 'staycation'. The term contradicts the notion of going away on 'vacation'. People can't afford holidays and are 'staying' home. Is it clear enough?

The Brits and French have made the concept their own: a 2008 report showed that respectively 59% and 60% would probably be staying chez soi (at home) that summer. Home, sweet home indeed. Those Brits who won't be going to Spain this year – they'll be making ten million fewer trips, according to The Guardian – means that Spanish citizens are staying home to salvage their tourism industry.

When polled at cafebabel.com HQ, Italians could barely grasp the principle, let alone have heard of the staycation phenomenon. There is however a phrase we dug out of the media that psychologists have come up with, vacanze talpa. In 2003 a whopping three million Italians were alleged to have taken 'mole holidays' – which involves lying about going away and opting in fact to hide away at home. According to one article in the daily Corriere della Serra, plants are still left to the neighbours to take care of, cars are still parked elsewhere and holiday souvenirs are still posted online to give the impression that one has gone away.

Certain sayings such as Warum in die Ferne schweifen, wenn das Gute liegt so nah? (Why go far when you can find all the great things here? ) or Ob Norden, Süden, Osten oder Westen, zu Hause ist es doch am Besten (north, south, east or west being home is best) prove that the Germans are quite pro-staycation. They even joke that they go on holiday in Balkonia (Urlaub auf Balkonien), or on their balconies, teasing the word ending so that it sounds like an exotic country instead.

Where is staycation taking us though? Does the heady mix of local recreation and beach holiday mean that all the single ladies will be straight out in their bikinis and flopped on the nearest patch of grass outside the town or city museum? Another travel guide edition devoted to the staycation? And what do you even call someone who performs staycation – a staycationer? A Balkonier in German? Europe's moles can have a little ponder about that over a fresh cocktail – on their balconies, of course.