Norbert Hofer is the voice representing almost 50% of the Austrian population. If he wins the coming presidential election on December 4 against his competitor Alexander Van der Bellen, the FPÖ candidate will be the first right-wing president in postwar Europe. A portrait:

“Do you have any pepper spray on you? Or a knife?” The security guard carefully investigates my suspicious make-up bag while another hunts for a forgotten pair of keys with a metal detector. This Friday, the grand foyer of Kursalon Hübner, a music hall in Vienna, is bustling with people. The crowd is mixed: you can see pocket-handkerchiefs and flannel shirts, eveningwear and tracksuits, families and pensioners, young and old. The upper and middle classes unite in the supposed fight against the elite, without a trace of irony, in a hall adorned with gold and chandeliers in the middle of the picturesque City Park. Nothing about the presence of police, security, and five camera crews seems logical or relatable to the common people.

Everybody wants to see him: Norbert Hofer! The candidate of the Freedom Party of Austria (FPÖ) is speaking for one last time as part of his tour before the country decides again, on December 4, who should become president. After the vote-counting irregularities in May and an attempted re-run in late summer derailed by faulty ballot envelopes, the right-wing populist Hofer is more than ready to face his rival: the former long-time leader of the Green Party, Alexander Van der Bellen. After all, Hofer won almost 50% of the votes the last time. This was the best result ever achieved by his party. Austria is divided: for the first time since the Second World War, there is the very real possibility that a European country might be lead by a right-wing president. 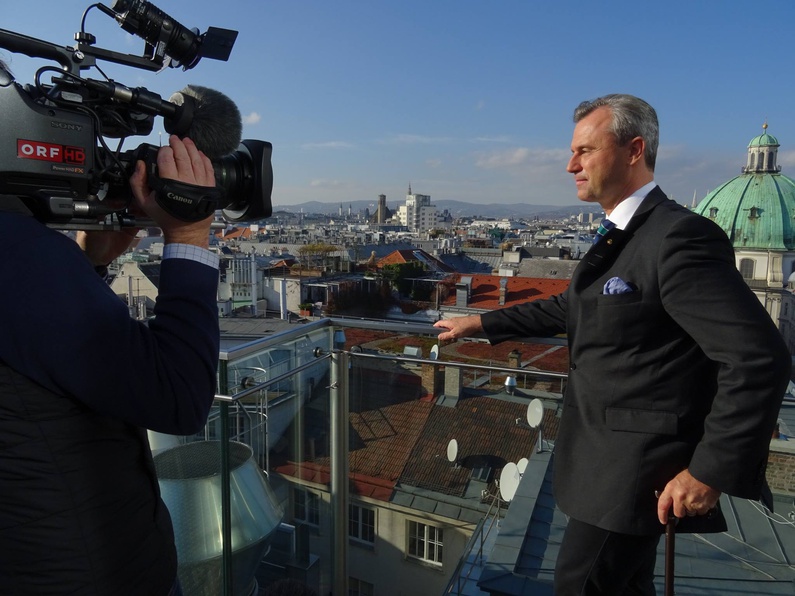 Norbert Hofer’s roots lie in the town of Pinkafeld in Burgenland, Austria, where he now lives with his second wife, Verena, and his daughter. It was precisely there that he won 61% of the votes in the first round of elections. According to his website, Hofer wants to “defend Austrians against the dangers of a false immigration policy. We Austrians have a right to our homeland and a right to protect ourselves against Islam and violence.” The Blues – the colour of his party – wish to defend this right of the citizens with all of their might. With the same sheer force of will that catapulted Hofer from his wheelchair back into life after his paragliding accident. Ever since, Hofer has been walking with the aid of a stick.

His followers, many of whom have travelled to Vienna today, praise his perseverance. Slowly but surely, the room of the Kursalon fills up. On the red-cushioned, gold-painted chairs, there is an exchange of greetings. Men wearing pin badges bearing the insignia of the Order of St. George shake hands; behind me, someone has just spotted his tobacconist, and shouts “Servus, Hansl!” across the room. Everyone knows everyone. A few minutes later, the big white and gold double doors in the middle of the room open to reveal Heinz-Christian Strache, Chairman of the FPÖ, arm-in-arm with Norbert Hofer, with the former President of the Czech Republic, Václav Klaus, in tow, flanked by bodyguards and agitated photographers. The short walk to the podium, accompanied by wild applause and premature standing ovations, keeps getting longer. Frenzies of flashing cameras lasting for minutes at a time gives the FPÖ line-up a Kardashian-esque impression.

When Hofer reaches the rostrum, a tumultuous applause greets him. The presidential candidate is popular. He looks into the rejoicing crowd, smiling but with no real expression, while Heinz-Christian Strache - or HC, as he likes to be called - watches on, gripped by the occasion. 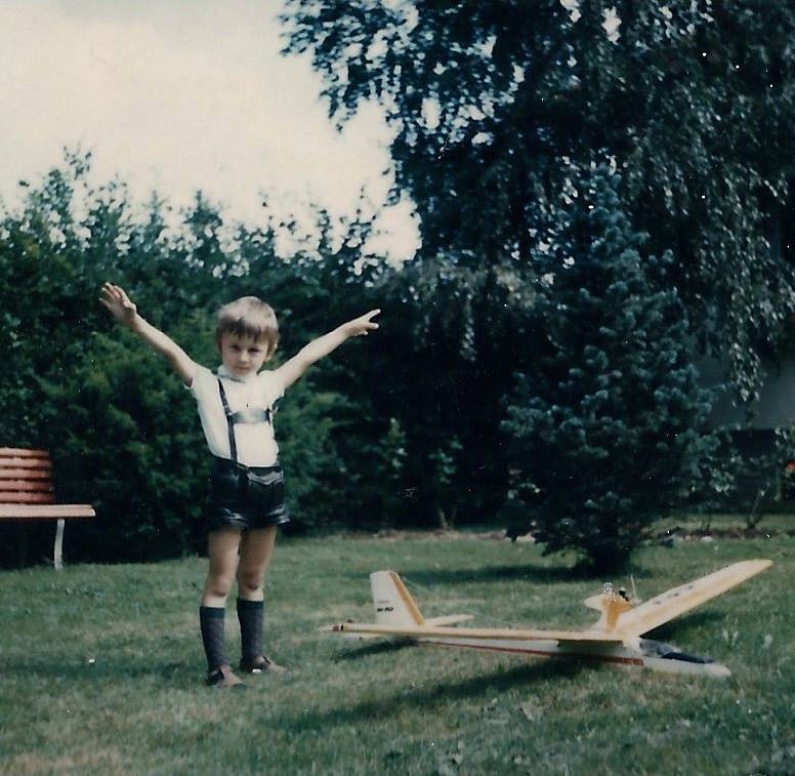 FPÖ voters like his amicable manner, his natural-looking smile. They also like him because he talks in a way that is cool, calm and collected; he never rants or raves. He even manages to keep his cool when speaking about the “invasion of Muslims” who, according to Hofer, have been flooding Austria ever since the refugee crisis. Even his age is a plus. New blood, and the energy that comes with it, sells itself well. If the widespread reports that can be found in the Austrian press are to be believed, Hofer didn’t even want to run for president; at the age of 45, he thought himself too young. Nevertheless, the chairman for the Blues, HC Strache, encouraged him. The persistent pointing towards Norbert Hofer’s “younger years” only works to his advantage, though. Even though he studied aviation technology and was subsequently employed as an engineer at Lauda Air Engineering, he can still look back on a career with FPÖ exceeding 20 years. He has also been the third President of the National Assembly of Austria since 2013.

During his campaign, Hofer has also willingly presented himself as the moderate FPÖ candidate, who operates independently from the party and wants to give the power back to the people who have lost it. With that said, he made significant contributions to the ideological programme of the right-wing party. He tends towards the right and is member of the Marko-Germania fraternity in Pinkafeld. Some of his confidants come from the Neo-Nazi scene. Norbert Hofer is anything but a political newcomer. 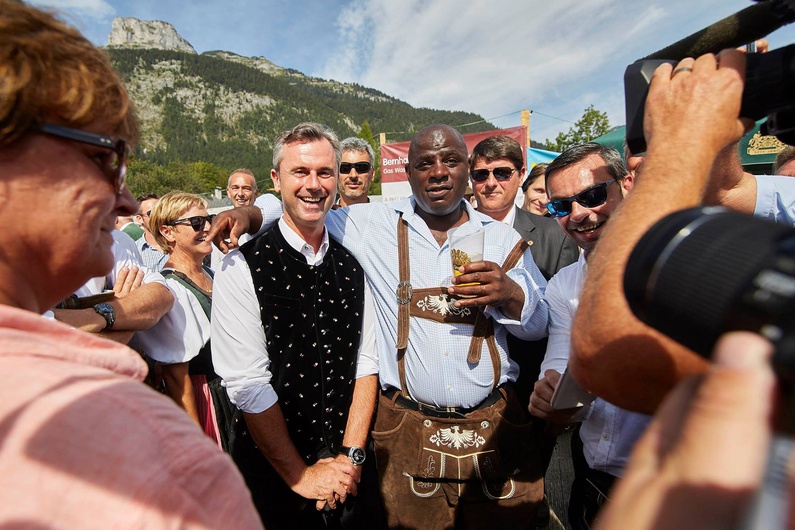 The storytelling around Hofer’s campaign is cunning. It’s readily explained that he’s just an everyday bloke. One of us. Even Václav Klaus, whom Hofer invited to Vienna today as a support act, speaks about this apparent normality. Shortly before, the Czech ex-president had asked: “Is it really possible to make Europeans out of migrants?” After the powerful polemic of Klaus, Hofer does indeed come across as almost moderate. What follows is a smooth address which nevertheless hides an ideological impetus. He talks about a “struggle for the truth.” The citizens of Austria have had enough of being told “what one is allowed to say and what one isn’t.” A change in thinking has begun. Finally! The citizens “want their Austria back.” The citizens in attendance seem to agree and habitually interrupt Hofer with a long applause. On account of his art of adaptation, the press have dubbed Hofer a “chameleon” and a “fox in sheep’s clothing.” A clever move.

“We can’t leave Austria to the Marxists, communists and Greens!” Hofer yells passionately, albeit with empty eyes. The scapegoats are as present as ever. Heinz-Christian Strache once called them “chlorophyll Marxists” in a well-known neologism alluding to those who might be differently minded. The label of “communist” often gets dropped when he speaks about his rival, Van der Bellen. An exact definition of Austrian communists remains elusive, however. At the last National Assembly election, the Communist Party of Austria (KPÖ) emerged with a meagre 0.8% of votes. They remain nonetheless the reason for Austria’s downfall.

On the other hand, Hofer and his team want to protect Austria from foreigners reportedly sucking the social system dry, and to strengthen both border control and the Austrian Armed Forces. They would also like to ensure heightened security, promote direct democracy, be the partner rather than the underling of the EU and, last but not least, lower taxes – all in the same breath. That’s what it says in the party manifesto, at least.

“I’m voting for the first time – and definitely for Norbert Hofer.” A high school pupil is attending the event with her grandparents. She sees the interaction between foreigners and Austrians at school, as well as the problems that come along with it. “He says what we’re all thinking,” explain two students. Freedom of opinion is important to everyone here: people feel suffocated by the political correctness stopping them from expressing their unfiltered thoughts. 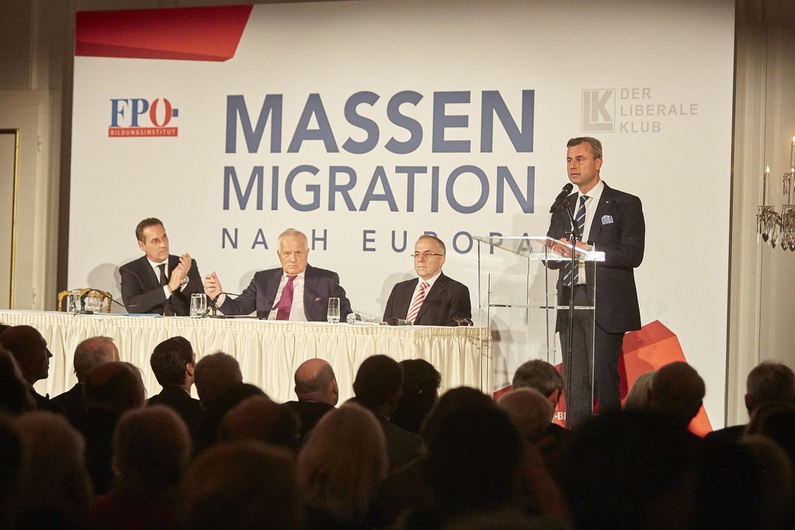 A security man yawns by the door. The evening, held under the slogan of “Mass migration to Europe,” has taken the predictable route. A prickly issue is discussed and degenerates into a tirade against the “establishment” and the opponents of the FPÖ and its voters.

“We have the responsibility to pass on our country to our children undamaged.” In an apparent “Make Austria great again,” it isn’t ever actually specified what it is, exactly, that is supposedly damaged about Austria. No matter; the crowd is enthusiastic. “I am convinced that everything will be done to prevent this election victory,” exclaims Hofer. The victim card gets played time and time again in his voting campaign. But, on this particular evening, the FPÖ candidate is showing some reserve by not appealing to the US elections or the Brexit. Even so, Norbert Hofer is not only publishing advent wishes and the exhortation of his wife Verena, anticipating becoming Austria’s First Lady, that the emancipated woman should please make use of her right to vote on the weekend; he also posted a magazine article with the title “Trump: turbo for the USA and the world” 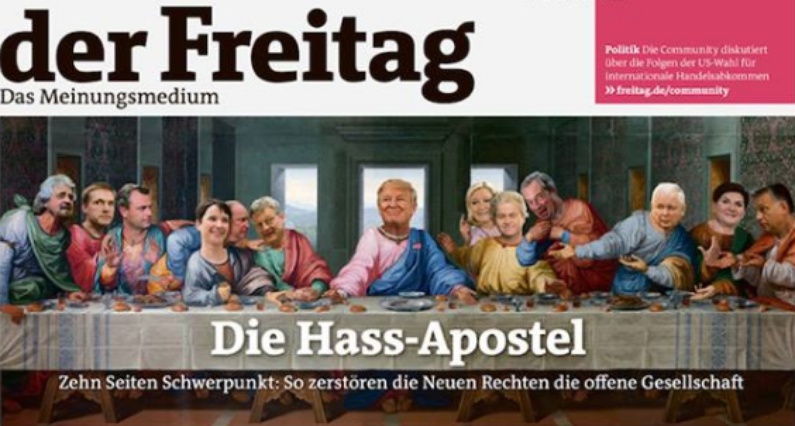 Ultimately, three hours have passed. It’s a matter of feelings and of understanding and appealing to the fears, prejudices, and lack of knowledge of the listener. “He is the voice of Austria,” explains a young woman in the foyer.

Yet, under the mask of understanding, there is no content, no vision, no suggestions for solutions. War and terror are the topics of the day: everything is on the verge of being destroyed by foreign forces. The speakers utter their scepticism about the media, political correctness, and the “out-of-touch elite.” The seeds of this critical discourse are landing on fertile soil, and the public feel that they are looking into a mirror. “Finally, somebody who is talking about it,” a woman says to me later.

“I am often accused of having two faces. And I will admit it, they’re right. I have a friendly and a very friendly face.” Hofer delivers this with a deadpan look. The quip delights the audience. Norbert Hofer has their attention in his game of switching between dazzling polemics and interpersonal rapprochement. There is no doubt about the semblance of truth in his performances in this room. “He’s one of us,” says a young man after the event.

“Bringing out the worst in people,” says Gertrude, an 89-year-old Holocaust survivor, who assesses the current political climate in her country in a viral video. She continues with a warning: “that already happened once.”