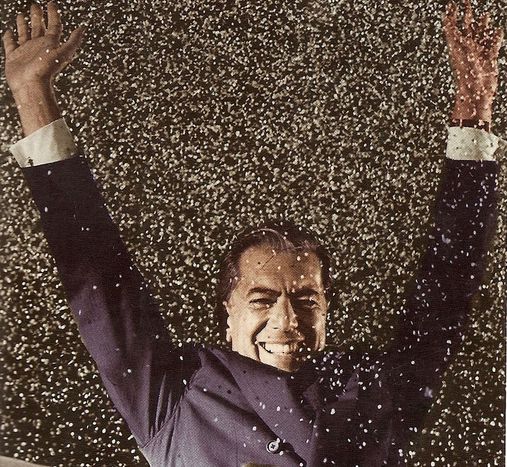 In 2010 the Swedish academy awarded a career linked to the description of power (including a real candidacy to the presidency of Peru), and also linked to ideas and defeat. The award coincides with an exhibition in Paris about the life and work of the Peruvian writer, who has often visited the French city as well as Madrid and London

Fire means heat, passion and wisdom, but it’s also associated to war and to the fight. In literary terms it may refer to love, wrath and intellect. Mario Vargas Llosa (Arequipa, 1936) refers to it as follows: 'Literature is fire meaning non-conformism and rebellion. Protest, contradiction and critique are the means of the writer.' The extract is from his classic speech when he was awarded the Romulo Gallegos award in 1967.

The Peruvian writer showed his passion for reading and writing from an early age. As soon as he learned to write he had already composed poems, and at the age of 16 he wrote his first play, La huida del Inca ('The Escape of the Inca', 1952). Despite his father’s wishes, he made a name for himself at university and excelled in his thesis on the Nicaraguan poet Ruben Dario. His career as a writer was long and his multiple journeys have helped him to become a better writer, between Lima, Madrid, Paris, London and New York where he has lived.

From 1980 on, Vargas Llosa became politically active. His liberal tendencies clashed with the left wing ideals at the time, which didn’t stop himfrom running for the general elections in Peru in 1990. However his defeat to Alberto Fujimori sent him back to Madrid. His political ideas are reflected in works such as La fiesta del chivo ('The Feast of the Goat', 2000). For him politics and ideals go together. 'I’m going to keep writing about what is encouraging to me, and defending my ideas, democracy and liberal opinions, as well as criticising any form of authoritarism,' he said.

Twenty years after his political defeat, La Maison de l'Amérique Latine (the Latin-American House) in Paris, with the collaboration of the Cervantes Institute, has dedicated an exhibition about Vargas Llosa's life and works. In Paris he wrote Conversaciones con una cathedral ('Conversations with a Cathedral', 1969), from a city he is in love with. 'If I had to choose a city to live I would choose London. However London doesn’t make me feel the same passion that the discovery of Paris did at the time.'

'It has been a total surprise,' said Vargas Llosa on Cadena Ser, a Spanish radio station, on 7 October when the Swedish academy awarded him his literature prize. 'I hope I was awarded it because of my work and not because of my political ideas. On the other hand, if my political ideas defending democracy and freedom and against dictatorships have been taken into account, even better. I am happy about it.'

Lastly, this man's words will always stay in everybody’s minds. 'Our vocation has made us, writers, good at discontent, at disturbing consciously or unconsciously society, at being rebels without a cause, at being the non-redeemed insurgents of the world, the unbearable devil’s advocates. I don’t know if that’s right or wrong, I only know is the way it is. This is the writer’s condition, and we must claim it.'