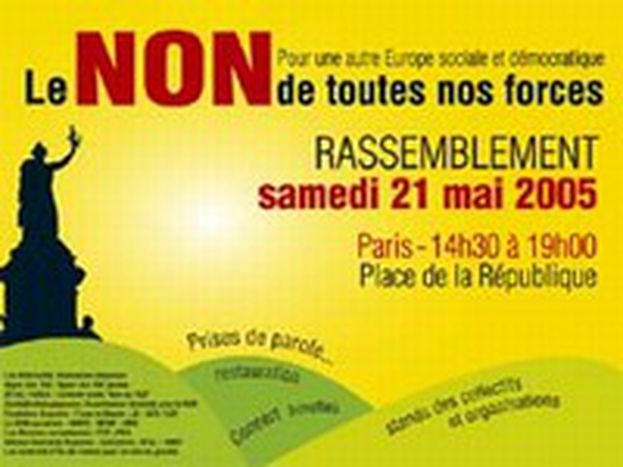 No to Schröder, No to the Constitution – Yes to Europe!

The defeat of German Chancellor Schröder’s Social Democrats in the North Rhine-Westphalia elections and the likely French and Dutch No to the European constitution prove Europeans are saying no to politics that forget social responsibility.

A No vote in the French constitutional referendum on May 29 is looking increasingly likely, and it is also probable that the Dutch, who are voting three days later, will reject the text. The scepticism towards the European Constitutional Treaty is a symptom of the general concern about the development of the European Union which, during times of East-West confrontation, benefited from comfortable levels of prosperity but which is now buffeted by the cold winds of globalisation. Once the champion of the man in the street, Social Democracy has, under Blair and Schröder and their doctrine of competition and liberalisation, transformed itself into a merciless advocate of social cutbacks – and in the process has destroyed itself. It was only with great difficulty, and thanks to the British ‘first-past-the-post’ electoral system, that Blair survived the recent election, and Schröder is heading towards the German parliamentary elections (brought forward to this September) with a catastrophic record (5 million unemployed!) and with almost no chance of winning.

The French No campaign and the defeat of Schröder’s Social Democrat Party (SPD) in North Rhine-Westphalia stem from the same feeling of dissatisfaction and injustice. The current direction of the EU appears to reflect a breakneck globalisation that tears down all borders and in which only the strongest survive. Competition comes from Chinese firms from without, Polish builders from within, and, even worse, German haulage firms which drive under Cypriot flags to bring down wage costs and yet never set foot in Cyprus, not even to submit their tax returns. Poles iron clothes in Paris - illegally, of course, and with no social security - and companies arranging temporary work send whole East German families to the Netherlands for the tomato harvest. This is not the happy InterRail and Erasmus Europe of a polyglot ‘Euro-generation’ that enjoys spending a semester eating tapas in Barcelona. The EU is fostering a new Euro-proletariat that is forced to work wherever there is work going. The No campaign in France is not directed against the European idea in itself, nor against the text of the treaty, but against the market-dogmatic politics portrayed as the only option.

When the sense of community is sacrificed to an age of a universal principle of competition, the foundations of a political Europe are lost. A No in France, however, offers the opportunity for a real transnational discussion about the how the future of the EU should be shaped. The pro-European Left will have to nail its colours to the mast and work for alternatives through international dialogue. A No can transform the frustration of the citizens of Europe over fatalistic market politics into a pan-European movement devoted to a new, social Europe.