No Sour Grapes in Slovenia

The party following EU enlargement will be huge. Slovenia’s bringing the wine. 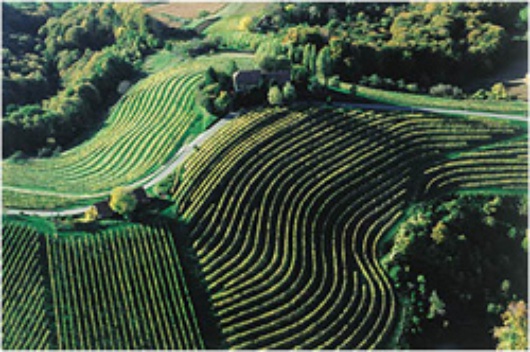 ‘The harvest is over friends, and the wine clears the eye and the heart, and melts away all our troubles’. No, it’s not a drinking song, it’s the Slovenian national anthem. This new EU country happens to be an expert producer of wines, with 25,000 hectares of vineyards producing 80 million litres every year, of which Slovenians guzzle 45 litres per person per year.

It’s been an expert in its field since time immemorial. In the north-west of Slovenia, in the old Jewish quarter of the town of Maribor, we find some of the oldest wine cellars in Europe. The Roman historian Cornelio Tacito (59-119 AD) himself mentioned the wines of Poetovio (what is now Ptuj), and he seems to have rather liked them. And his fondness for them is shared by the EU Agriculture Commissioner, Franz Fischler. Thanks to him a deal was signed which, with effect from 1st January 2002, increased the level of imports of Slovenian wine to the EU. Indeed, the elegant bouquet and good body of Slovenian wine seem to have facilitated the warm welcome the country has received from the Union, since the deal was described by Fischler himself as ‘an important step in Slovenia’s process of integration into the EU’.

Wine to suit all tastes

So from 1st May the French Bordeaux and the Spanish Rioja have another source of competition at home, with a Dionysian richness surprising for such a small country. Such splendour is due to Slovenia’s varied climate, which gives rise to three wine-growing regions, with different varieties of grape. In sunny Primorska, on the Adriatic coast, there is one wine that stands out, Teran, which must be drunk alongside prsut, Slovenian ham. Posavje, in the south-east of the country, houses Cvicek, a smooth red wine, ideal for drinking in the summer. Podrajve, in the east, is a region known for its sweet, white wines, like Moscatel. Within this region, in the wine-growing area of Jeruzalem, we find a delicious local variety, Sipon, which, according to legend, derives its name from the comments of Napoleon’s soldiers upon tasting the wine: c’est bon!

The quality of the wine means that it has won a number of international awards, starting with the Ljubljana International Wine Contest, the world’s oldest wine contest, from 1955. The contest’s reputation resulted in Liubliana being given the title of the ‘City of Vine and Wine’ at the International Wine Organisation’s Rome Conference in 1987.

Nevertheless, the Slovenians are quite capable of adulterating their wine. Bambus, or red wine with fizzy orange, and Spricer, or white wine with lemonade, are popular drinks and rather endanger diplomatic relations with conservative wine-growing countries like France.

If you’re with the French and are appalled by these bizarre concoctions or if you just don’t like wine, you can always try the delicious Slovenian beer. If possible, a veliko pivo, a large one.