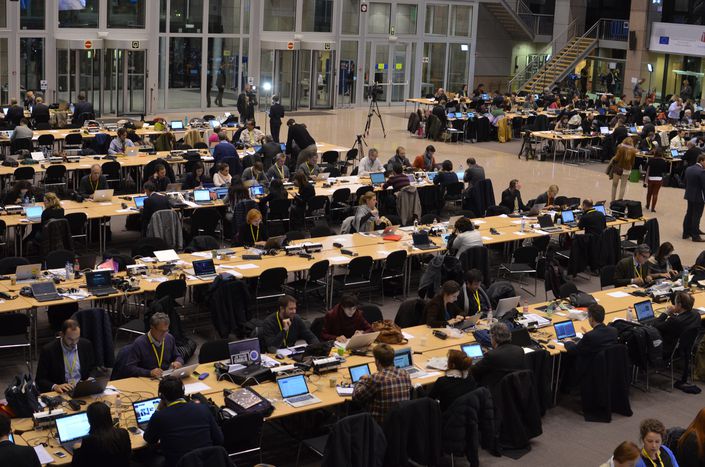 No beer after 11pm: Behind the scenes of the European Summit

Whether they are dealing with Greece, refugees or energy, the European Summit always attracts hundreds of journalists from across Europe and the wider world. Does this make for an austere atmosphere? Far from it. During all the inevitable waiting, taking a drink in the bar and fishing for information can be a unique experience.

"I hear it said that they want to end the discussions this evening so they don't have to prolong the summit until tomorrow."

"I think that we are going to be here all night..."

This exchange perfectly illustrates the kind of thing you will likely here in the corridors of the Justus Lipsius building during the European Summits, organised every 2-3 months in order to unite the leaders of the 28 EU member states in Brussels.

At the same time as discussions take place between Merkel, Holland, Tsipras and the other EU representatives, hundred of journalists from across Europe and elsewhere eagerly await the final press conference, their eyes never too far from a smartphone.  In order not to miss what is finally decided, negotiated, or agreed upon.

In awaiting the end of the discussions (sometimes long into the small hours of the morning), it's the job of the journlists to provide up to date information directly to their newsrooms, or to finish their articles ready to appear in newspapers and websites early the following morning. But since the discussions unravel behind closed doors, how does the information manage to filter down? 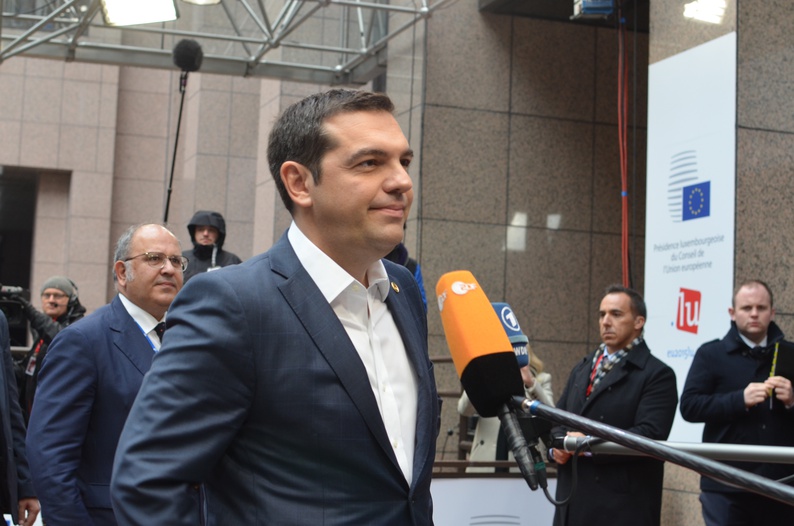 Sorting through the dribs and drabs

In theory, between the arrival of the representatives in the early afternoon and the press conferences at the end of talks, the doors stay firmly closed and no information leaves the conference room. But in practice, diplomats descend into the great hall of Justus Lipsius to keep journalists on the right track, up to date on the progress of discussions.

This approach is obviously part of a communication strategy. "We notice that the French diplomats always arrive before the evening news broadcasts go out," one journalist explains to me, who covers the summit for a variety of french sources.

Information nevertheless arrives only in dribs and drabs. As a result, Twitter becomes the best friend of a journalist on the look out for the latest developments. Thanks to the hastag #EUCO, which stands for "European Council", you can search for the latest updates, as well as find answers to practical questions. For example, as a Belgian newspaper reporter journalist explains to me, "knowing what time the summit is going to end is crucial in order for us to meet our deadlines. If you think that it's going to end soon, you need to really stay on your guard in case you need to modify something at the last minute. Like the headline of the front page of your paper." 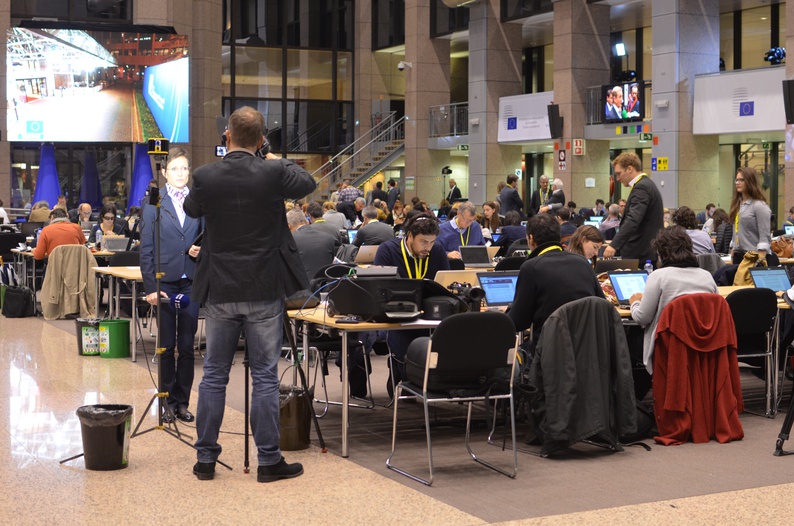 But once the broadcasts have gone out, the articles have been sent off, and the newspapers are ready to print, there is still more waiting to do. Is this job synonomous with boredom? "As the negotiations take place behind closed doors, we do a lot of waiting... and sometimes, yes, we're bored," confesses a British online journalist, but like any other journalist that we could have met, he explains to us that this free time can be very beneficial. It serves to "meet and discuss the day's events with our peers. Above all to compare our perspectives and consolidate our ideas about such and such an event or declaration."

Do these discussions sometimes finish up in the bar? Yes, but not without (somewhat forced) moderation. For the beer pumps are turned off at 11pm; after that, it's only fruit juice and soft drinks. "It's been the rule for six years," explains a member of staff, "the journalists could not control themselves and we would find certain amongst their number under the tables. It's true!" 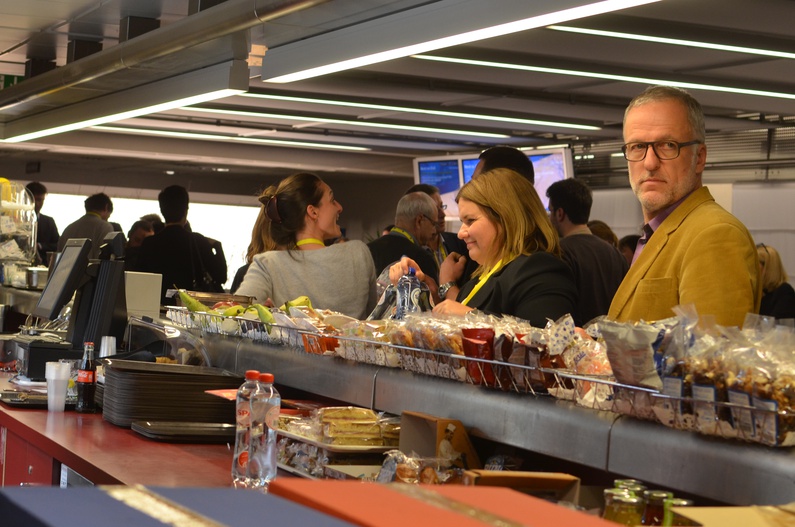 "I had the fright of my life!"

Whilst the free time permits meetings and discussions, the waiting becomes more physically trying the longer the summit continues, sometimes until 7, 8, or 9am. After more than 10 years of covering the European Council, one reporter confides in me that he's "had enough of the summits continuing indefinitely." He explains: "I had the fright of my life when, one day, a cleaning lady woke me up when I had been dosing without realising it. I'd thought that I had missed everything, the conferences, all the vital information... a fatal error! But in fact, I'd only been asleep five minutes."

For it really does pay to not miss the final press conferences. To avoid this kind of misadventure, extra precautions need to be taken. "I remember that I saw journalists sleeping in the press room during the discussions surrounding Greece. It was very funny to see," recalls the Belgian journalist. He confesses to find the rhythm of things a little difficult, but nevertheless thinks that "it's all a part of the charm of the summit."

Thankfully today the wait doesn't last until 7am the next morning. Suddenly, the noise in the corridor increases exponentially. On Twitter, it is announced that "#EUCO is finished" and the journalists make their way to the press room for the briefing of their choice. Who are they going to see? Merkel? Tusk? Hollande? Cameron? It's necessary to choose because all of the press conferences take place at the same time. Certain representatives sometimes decide not to even give a conference. Are they less talkative, more indifferent, or just the losers of the discussion? One can only wonder.

In room 20, François Hollande's press conference is nearly packed out. He announces soberly which decisions have been taken, what agreements have been made. He details the paths that discussions have taken and responds to jounalists' questions. In short, he delivers a highly calibrated communicative address. 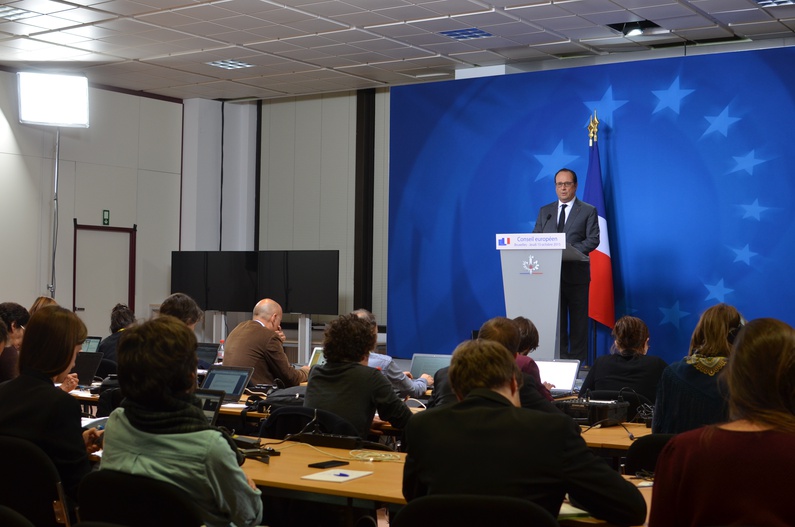 But after the official conference is over, the French President does not escape further questioning. Off the record, he is pressed about answers he gave which can't really be called answers at all. This permits a better understanding of the material, of what's at stake, and what power relationships are at play, even if the information is not allowed to be reported. Suddenly, stranded behind his pulpit, it really seems as though Hollande is more relaxed, transformed into a kind of joker.

By the time this "off the record" plenary discussion is terminated, the room is already emptying bit by bit, and if certain journalists are staying anyway until the small hours of the morning to finish their article, the hall of Justus Lipsius finally finds itself calm once again. We tidy up. We tie things off. We go to sleep. Before the next summit begins. 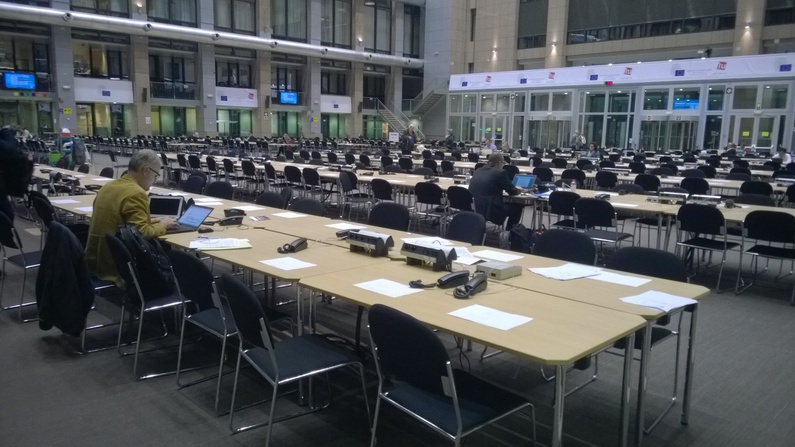 This article was contributed by cafébabel Brussels.