No band is an island: a conversation with Ephemerals

Both as musicians and as people, Ephemerals defy convention. Their music is a bit of funk, a bit of jazz, a bit of soul, and they’re an eclectic mix of English, French and American. But they’re also, by their own admission, none of those things. Cafébabel caught up with them at the tail-end of their European tour.

Sitting on the terrace of the Sunset Sunside, a jazz bar tucked away in a side street of the first arrondissement, the six men I’ve come to talk to on a Thursday evening look like any crew of Parisian hipsters: there’s facial hair ranging from five o’clock shadow to full-on beards, an impressive array of colours in their outfits, and just a hint of glitter on their faces. It’s only when you get close enough to hear their British accents that it becomes clear they aren’t from around here.

Eventually a stocky guy in a pork pie hat gets up from the table and makes his way to where I’m hovering by the entrance. This is Jimi Needles, the drummer. As he shakes my hand he explains that they’re waiting to do a brief photoshoot, but there’s a problem.

“Wolf’s gone missing,” he says. Apparently, it’s not an irregular occurrence. However, only a couple of minutes go by before the band’s American singer - full name Wolfgang Valbrun - arrives, a bobble-hat in the shape of a snow-leopard perched on top of his head and fingers festooned with rings. Ready for his close-up, Mr DeMille.

Eventually the photos are taken, and I follow the band down into the bar’s basement, where their equipment is already set up tonight. We form a lazy circle at one side of the room with red and white leather chairs, looking like the world’s strangest support group. Everyone is enthusiastic, but they’re also visibly tired: tonight is the final night of a European tour that’s taken them across the UK, Germany, Belgium and finally Paris. 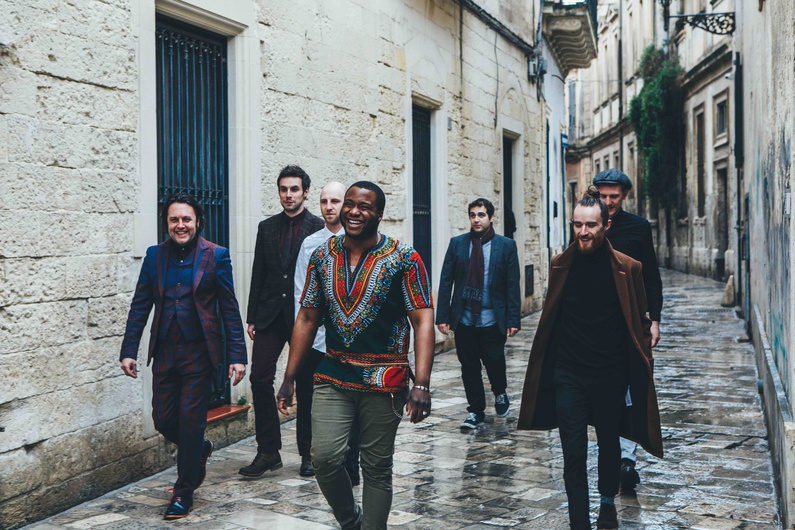 Most of the talking is done by Wolf and the band’s guitarist: the fabulously-named Nic Hillman Mondegreen, a slender guy with a man-bun and a coppery beard who Wolf describes as the “architect of the band.” The two men met when Wolf was singing as the support for another band back in 2013 and Ephemerals was born, with Nic picking up more and more musicians along the way.

“It’s my job to hold on to people that fit. I know Jimi and Adam [Holgate, the bass player] and Damien [McLean, the trumpet player] from a while back. We lost our saxophone player a few years back, and Thierry [Lemaitre] came in overnight because he was from Paris and we had a gig here. As soon as we heard him play, that was that. We've hung onto him ever since.”

Ephemerals have now released three albums - their latest, Egg Tooth, was released in April - with a 13-strong ensemble including a harpist and a string quartet. It helps give the albums their rich, layered sound, but it also provides a challenge for the small contingent that have come on tour. "Unlike most bands," Nic says, "these guys don’t road-test their songs. They record first, and work out the logistics of a live performance later.”

“When you get on the stage it feels quite naked after being in the studio,” says Nic. "There's always a question of 'what do we do with this part where the strings are supposed to play. It's about trying to do it tastefully - not invading the space, but finding the right balance with seven people.”

While the band’s first two albums - Nothin is Easy and Chasing Ghosts - have a more traditional soul sound, Egg Tooth sees the group take a turn for the psychedelic. The name, explains Adam (resplendent in a wooly poncho), comes from nature - an ‘egg tooth’ is what birds and reptiles use to push their way out of their eggshells and into the world. In particular the album’s first single, The Omnilogue, sticks out like a six-minute sore thumb amid an album full of three-minute songs. But according to Wolf, it’s totally natural.

“A person evolves and they're still that same person,” he explains. “A band can evolve and still be the same band. Sometimes people look at bands like they’re sculptures: they don't evolve, they're frozen in time. We're not a sculpture, we're human beings. The name of this band is Ephemerals: we're fleeting.”

It feels like, in a way, most of Wolf’s life has been ephemeral in one way or another. Raised in New York, he came to Paris as a teenager after his parents divorced. But when I ask him how it feels to be playing in his home city, he tells me that he currently doesn’t have his own place and is crashing on sofas in the interim. Nor, despite living here since his teenage years, does he feel particularly French: “I can’t really identify with a nationality or a patriotic sentiment. I like to attach myself to people, but not to a place or a culture.”

I ask him if it’s something he’s tried to do in the past. “When I was young it was hard,” he tells me. “You want to say ‘I come from Western culture, so that's me’, but it's only a miniscule part of what I am. And then adolescence hits and you start realising that people are shit, the world is not as perfect as you would like it to be... And so I start to think 'I don't want that.' It closes you up."

“I don't want someone to pinpoint what I am. People already do that for me enough because I'm black. People always ask me where I'm from, which is a very weird question to ask. You're constantly obligated to justify yourself, and that's something I just don't do anymore because I don't care.”

“But the band doesn’t have a home, either,” Nic chimes in. “That’s what’s so fucking cool. We live all over England, we’re all over the place, and when we play we just get in our little bubble.” 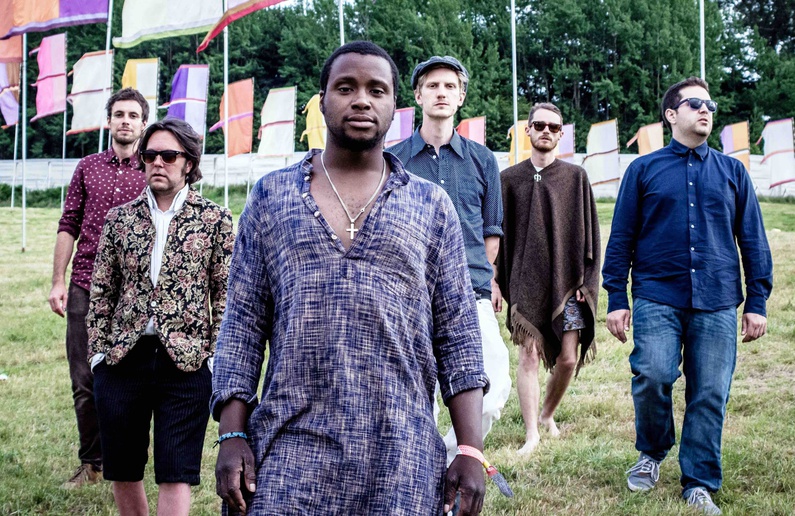 Yet as much as Ephemerals may think of themselves as their own micro-nation, no band is an island unto itself, and the group is very aware of the turbulent nature of modern politics. Jimi recalls the sour mood at the Glastonbury Festival in 2016, the morning after the Brexit referendum: “We all woke up on the Saturday just hating everything. It was an awful place to be for such awful news, and you could really feel that. All of us were gutted, and the festival goers were just so sad as well… and then fast-forward a few months and Donald Trump is elected. When the fuck will this end?!”

Jimi also points out another potential side-effect of Brexit: how will a band that struggles to get by financially cope with the added expense of bureaucracy once Britain is no longer allowed freedom of movement in the European Union? Even so, he considers it a ‘selfish’ thing to be worried about: “The really big question is, why is there such a rise in xenophobia and racism and division? Walls, walls, fucking walls.”

“I don’t think it’s that selfish,” Wolf interjects. “Politics should never influence culture. Not in that way. You cripple people when you don't let them circulate the way that they want to. It's not a question of being selfish. It's a question of realising that we're moving farther and farther away from liberty, and it's a scary thing.”

The solution? "Simple," says Nic: "Fight hate with love. This is why it's important for me that our Twitter is only positive. I'm trying to accentuate the positive and eliminate the negative.”

Nic is in charge of all of the band’s social media profiles, and each has its own unique voice: the Instagram is ‘banter for the band’ - a mixture of funny photos and jokes that are impenetrable to outsiders - while the Facebook page is the ‘professional face’ of Ephemerals. But the real piece de resistance is the Twitter account. Referred to as the band’s ‘Advocacy Wing’, it’s a mixture of inspiring quotes and images, some of them political: there are references to the Green Party in the UK, and on the night of the French elections Nic tweeted a screenshot of the exit poll results with a one-word message: “Hope.”

Nic’s aim, in his mind, is to make the band’s appearances both on stage and social media into a safe space that all can enjoy. But that doesn’t mean they don’t do some sorting of wheat from chaff.

“We also pull some abrasive stunts,” he admits. “We start with a piece of spoken-word poetry that’s very difficult to get into. It wakes people up, shakes them out of what they thought they were coming to see.”

But does he ever worry about it backfiring? Keeping audiences on their toes is one thing, but scaring them off is another.

“Wolf always talks about the constant battle in live music between art and entertainment, which is something we have very strong feelings about. You have to make sure you're not alienating the audience, there has to be that element of entertainment there. But we don't want to go on stage and be entertainers. You have to make sure you know where you're going artistically. If we wanted to write hit records, we would.”

Soon, a member of the bar staff comes down to move us so she can start putting out chairs for tonight’s performance, and the band goes in search of food. Tomorrow they will start to go their separate ways - Jimi has a DJ set in London the following night - before slowly coalescing once again for another tour in October. Only time will tell what form the Ephemerals will take when they drift back together.