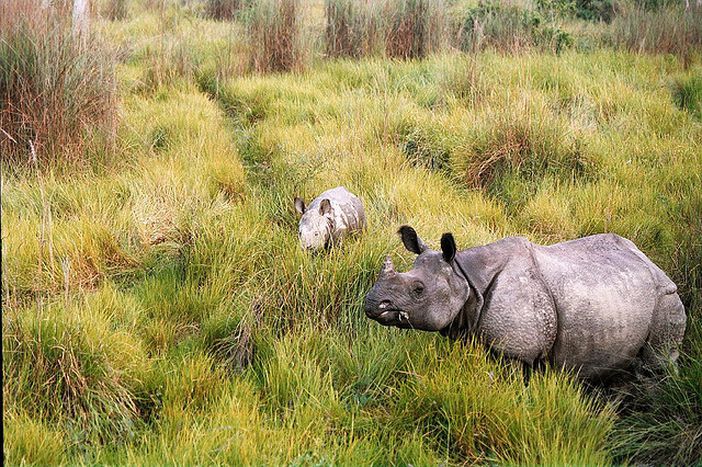 “Jungles are dangerous, of course, but I'll teach you a couple of easy tricks. If a rhino attacks, you have to climb a tree or run away in a zigzag line. That way, the rhino can't follow you so fast.” While Mohan explains to me how to survive in a subtropical jungle, I suddenly feel nauseous. Maybe the famous jungle walk isn't so safe after all?

Mohan's advice doesn't end there: “If you see a tiger, you have to make eye contact and you should never turn around because tigers always attack from behind. And if we encounter bears, we have to stay together because in a group we'll scare them more.” Slightly embarrassed, Mohan smiles at me. “We will, of course, try to defend you.” Somehow, I don't feel entirely safe in the company of my two rather small Nepali guides with their bamboo sticks. 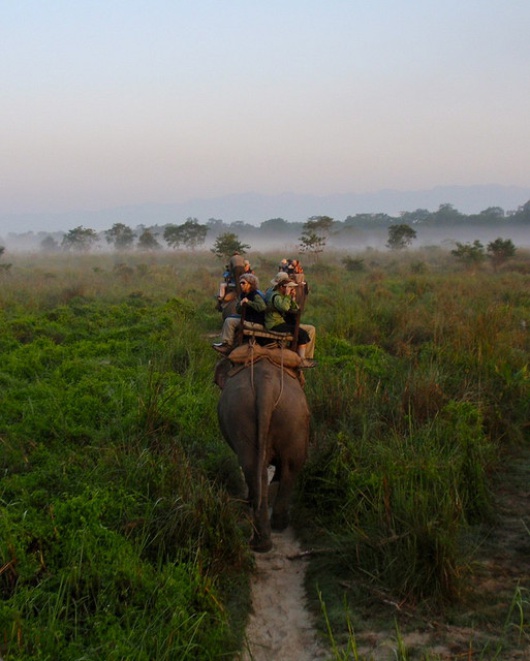 But it is too late to turn around because we are already making our way into the jungle. While most national parks can only be explored by jeep or from the back of an elephant, the administration of Chitwan National Park in the Southern plains of Nepal is relatively relaxed. “Sure you can walk through the jungle!” says Raj, the owner of my hotel. Luckily, that way it's also cheaper. However, if you take into account the considerable number of rhinos, wild elephants, sloth bears and leopards, as well as around 80 Royal Bengal tigers roaming Chitwan, a Westerner can only find this reckless. Nevertheless, Mohan assures me that those predators aren't really dangerous and that we only have to watch out for bears and elephants with calves. The further we move away from the river Rapti, which is the natural border between the North of the park and the settlements of the local tribe Tharu, the more breathtaking the landscape becomes.  Dry sal tree forests, where fallen leaves rustle just as at home, open up into wide grasslands over which impressive grey rain clouds pile up in a purple sky. At the horizon, I can make out tall elephant apple trees still veiled by the early morning mists and small hills with denser forests that lead into the “heart of the jungle”. Many Nepalese refer to the whole of Chitwan with this darkly beautiful metaphor, but its dangerous implications don't seem to unsettle Mohan and Ashish much. Neither does the immediate presence of countless rhinos and bears. While we eat our lunch of fried rice and boiled eggs, we hear the roaring of fighting rhinos close by. Mohan smiles: “It's mating season!”

Chitwan is one Nepal’s most famous tourist hotspots. Founded in 1973, it was the first national park in Nepal, and has been a World Heritage Site since 1984. Incredible landscapes and a relatively high number of mammals and birds have provoked a huge influx of tourists over the last twenty years. Thus, if you come in high season, you will be trudging through the jungle with a squadron of other foreigners. This means your chances of seeing a rhino will be practically zero, says Raj, who bewails the commercialization of the park although as a hotel owner, he also profits from it. Luckily, I have ended up in Chitwan in the off-off-season, during the oppressive heat just before the monsoon, and I only spot one or two tourists at the beginning of my walk. Big predators are a long time coming, small ones are not; I have to continually defend myself against ticks. 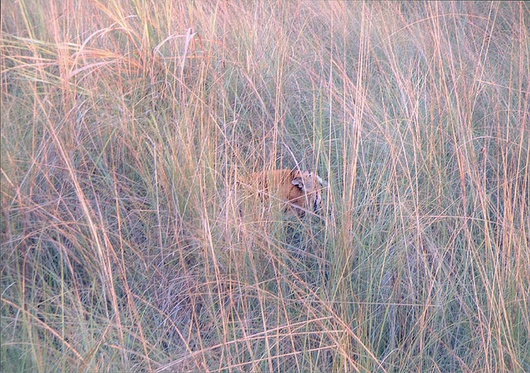 By noon, I have only sighted a crocodile, a couple of deer and a huge number of jumping, fluttering and twittering birds. But Mohan, who seems to know every path, tree species and animal dropping in the park, tells me to be patient. After we have inadvertently flushed a peahen with her chicks and eaten unripe green mango with salt, we wander across a kind of dam through the strikingly green grasslands that sweep down both sides. While a storm gathers in the skies and Mohan condemns plans for further water dam constructions, two rhinos slowly shove each other across the embankment not too far from us. Mohan smiles happily. “There they are! A male and a female!” Did they see us? Probably not, says Ashish, and explains that rhinos are very short sighted. Long after they have disappeared into the reeds, I am still marvelling at the size of the two rhinos when suddenly Mohan tells me to stop short. On our left, another gaindaa ("rhino" in Nepali) is chewing and mumbling in the high grass, but we can only make out its backside.

While I'm wondering if we’ve maybe crept up too close to the rhino, a muffled roar suddenly rises out of the grasslands behind us. Mohan and Ashish immediately look up, exchange fast words in Nepali and motion me to keep still. A tiger. In the two metre high grass behind us and probably not that far away. Because of the grass, we can't see a thing, even after we have climbed a small hill close by. A tense silence falls on the plains and even the birds don't sound their warning cries any more. The terrifying roar rises up again. Over our heads, the clouds gather in grey towers of steel, it starts to drizzle and I silently ask myself if these are the last moments of my life. Motionless, we sit on the hill for a couple of very long minutes while I recap Mohan's survival tricks. Finally, the roar grows fainter. The tiger seems to have chosen another route. Noticing the cold sweat on my forehead, Mohan laughs. “That's the great thing about this job, the risk!” 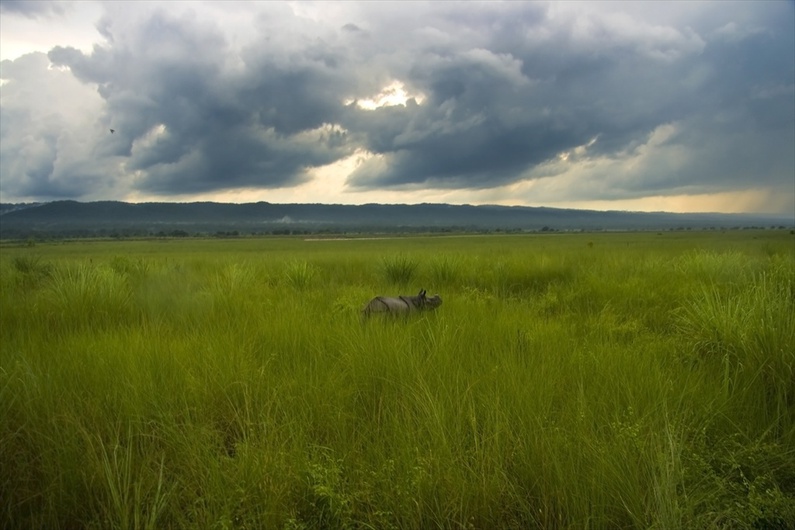 Two hours later, the sun slowly begins to set as we are wading through the river Rapti. Are these jungle walks really safe? I ask Mohan who is pulling up his trousers. “Nothing ever happens. Only sometimes elephants attack local guides, but that's very rare.” Back in the village, a jeep stops right in front of us, tyres screeching. A young Nepali with a deep scar, still fresh, on his face greets Mohan and laughs. “Look at my scar! Last week I was attacked by a bear!” As we make our way home in the twilight, I suddenly remember what Prakash, another hotel employee, told me: “If you're attacked by a tiger, just fold your hands in front of your chest, bow and say namasté!” Which in this context probably means: “I gladly accept my fate. You may eat me now.”

Nevertheless, this jungle walk didn't really scare me off. The vast grasslands, misty hills and dark storm clouds were much too beautiful for that. The next time, however, I will walk around Chitwan for at least three days into the real “heart of the jungle”. And I'll take my own bamboo stick.