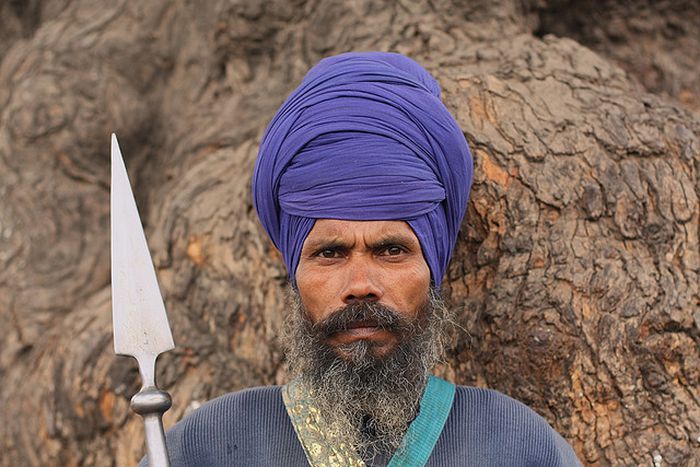 narinder singh international: the big heart of the punjab

„The food is very bad and the rooms are overpriced. You really shouldn't be staying here.“ When a gaunt little Indian in a grey tweed suit and a light blue turban approaches me in the canteen of my – admittedly decrepit – hostel at the bus stand of Chandigarh, I am immediately suspicious.

After months on local buses, in squalid hotels and on board numerous night trains, I have learnt to defend my privacy tooth and nail. But Narinder Singh, who introduces himself as “the unofficial tourist guide of Chandigarh, capital of Punjab”, is not after a meaningless chat or my rupees. “Chandigarh is an interesting city, but most young backpackers never realize that because it is so expensive. There is an impressive number of five star hotels, but no backpacker hostel!”

Narinder, who retired a couple of years ago, has set out to fix this deplorable state of affairs by showing travellers around his city. As he sees his guide job as tourist charity work, he never asks for money which is surprising enough in a country where tourists are seen as walking moneybags. Reassured by the many articles in the Times of India about “Narinder Singh International” which my new friend has pulled out of his enormous bag of papers and pamphlets and having not much else to do, I give the canteen a rain check and join Narinder on his tour around town. “Chandigarh is very special”, he explains to me while we are trotting down the main road on our way to the city centre. “The whole city was built according to grid-pattern plans by the famous Swiss architect Le Corbusier. That is why in Chandigarh the High Court, the Legislative Assembly and most parks and gardens don't look very Indian.” 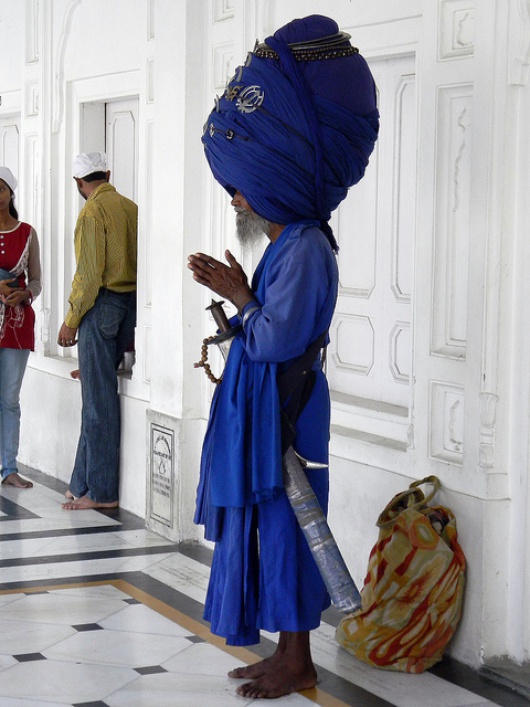 We walk from sector 17 to sector 22, admire very dry looking rose bushes in the spacious Rose Garden, eat sticky and sweet lentil balls in the canteen of the city council and visit a gurudwara. Although this exotic sounding name might conjure up images of religious brain washing in the mind of a non-spiritual Westerner, a gurudwara is – innocently enough – a temple cum hostel run by the adherents of the Sikh faith. Founded in the 15th century by Guru Nanak, this world religion counts more than 22 million followers in India, most of which live in the Punjab. Even for a foreigner, male Sikhs are easy to recognize thanks to their colourful turbans, the trident like symbolic stickers on their cars and the five K's. “In Punjabi, they stand for kesh, kanga, katchera, kara and kirpan; long hair and beard, a wooden hair comb, a special kind of underwear, a silver bracelet and a particular sword or dagger for self-defence,” Narinder explains. The kirpan must seem strangely militaristic and therefore outdated to Europeans, but in India it is still a fairly serious business. As the Punjab lies on both sides of the Indo-Pakistani border, the Sikhs had to suffer more than others from violent uproars and ethnic cleansing after the religiously motivated separation of India and Pakistan in 1947. Obviously, this dark episode in Indian history hasn't helped much to make this religious minority feel safer in a predominantly Hindu and Muslim state. The fact that Indira Gandhi, the much loved and hated former prime minister of India, was assassinated in 1984 by her Sikh bodyguards, also didn't help much to tone down the militaristic image of the Sikhs or to ameliorate their relationship with the Hindu community. The kirpan is therefore not a comic religious relic, but the guarantee to be able to defend one's own life and the lives of other members of the Sikh community. 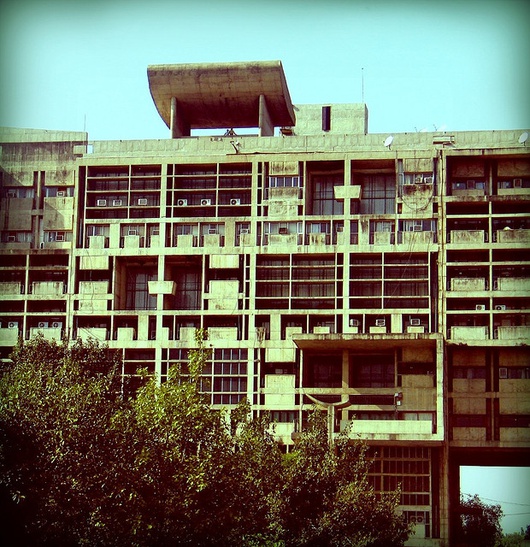 In the meantime, Narinder and I have arrived at the High Court and Legislative Assembly of the Punjab and to my great surprise, I notice that all policemen, soldiers and politicians take their time to reverently greet him. There couldn't be more military in these buildings, displaying a very clean and authentic Le Corbusier style and which in the 1980s saw their share of religious and political violence. “That was very very bad”, says Narinder frowning. “I was there at the time of violent uproar, standing on this balcony. Back then, I was the private secretary of the president of Punjab.” While I am still wondering what would make such a politically influential man embrace tourism as his second calling, Narinder is smiling again. “Do you like Le Corbusier? No? Me neither. Let's go eat!” Half an hour later, we sit in the dining room of a five star hotel – the owner is Narinder's friend of many years – and attack the buffet. The Punjab isn't famous for his cuisine for nothing and, at closer inspection, most Sikhs look a lot better fed than their Hindu brothers. This might be due to mountains of fried chicken wings or to a general fitness obsession. In Punjab, every other shop seems to be either a fried chicken dhaba or a gym.

While I thought that Chandigarh couldn't boast of more than three tourist attractions, I am soon put right and in the afternoon, I even have to ask Narinder to slow down: After a visit to the office of the city mayor and to the legendary Rock Garden, built entirely of stone and rubbish by the government official Nek Chand, my feet start hurting. Narinder, still energetic and happily chatting away, doesn't want to accept any money or an invitation to a restaurant for his guided tour of Chandigarh. As if this wasn't enough, he even organizes a room for me in the gurudwara of sector 22 that doesn't normally host foreigners. It only takes Narinder seconds to pull a few strings and we are sitting in the courtyard behind the kitchen feasting on dhal and chapatti. In return, the administration of the gurudwara only expects a little donation and suitable clothes and behaviour.

As the sun starts to set, the daily service starts in the temple which I can't participate in, not being a Sikh, but which I am welcome to observe from the courtyard. Apart from chants and prayers in Punjabi, a number of shimmering swords seem to be at the centre of this ceremony that is very unlike all the Hindu and Muslim rituals known to me. The liturgical chanting of a group of elderly men provides the musical background for my night in the gurudwara and the next morning, when Narinder knocks on my door, I wonder if I should maybe stay a bit longer in Chandigarh. But Shimla with its snow-covered mountains is too much of a temptation and a few hours later, I leave the plains of Punjab for the Himalaya via the famous Great Trunk Road. 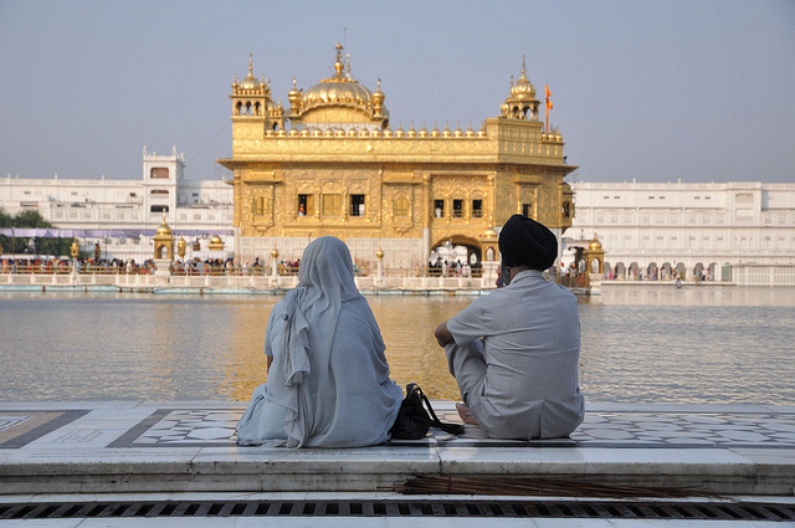 India wouldn't be the mother country of all miracles and strange coincidences, if my departure marked the end of this story. More than a year later, my travels lead me back into the Punjab, but this time I choose to visit Amritsar, the holy city of the Sikhs on the border to Pakistan. As the heat makes a walk around the city almost impossible, I decide to spend the afternoon in the Golden Temple. Sitting in the shade of the archways, I observe long rows of pilgrims in orange robes and dark blue turbans, as a well-known voice suddenly snaps me out of my musings. “Haha! Lily! You are here!” Standing in front of my is Narinder, beaming with joy. The fact that, after a whole year, we have both chosen to sit down in the same corner of the Golden Temple at the exact same day and time, is one of the many coincidences that make India so magical for many Westerners. However, Narinder doesn't indulge in lengthy mystical speculations, but invites me to lunch in a punjabi dhaba. Indulging in kulcha (Punjabi wheat bread) and lassi (yoghurt drink), we are waxing lyrical about the Punjabi cuisine. “You will soon come back here, won't you?” Narinder smiles between two gulps of lassi. “There are still so many things I want to show you in Chandigarh!"