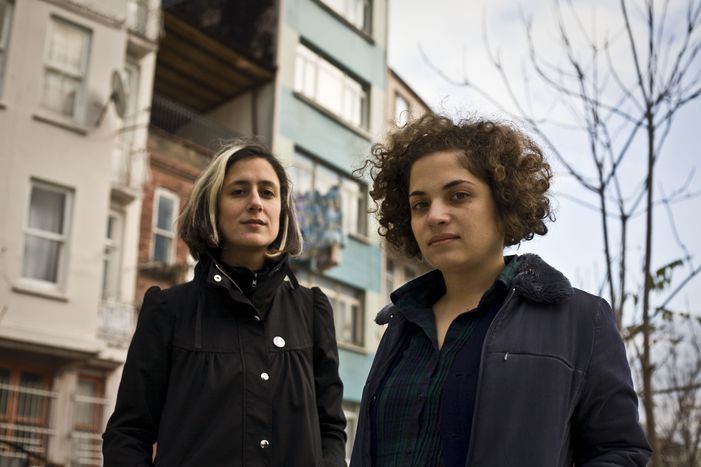 Music duo Kim Ki O: ‘the danger of being Turkish’ for Europe

BrunchBalkan eye in the sky

The Swedish pop elite love them, but EU bureaucracy is preventing Ekin Sanac and Berna Göl from breaking Europe. In Istanbul, music is an unstable bridge between east and west. Part two of a special feature

Read part one of this article

The worry about the political situation amongst people born in the 1980s is usually described as both a post-modern and global phenomenon, a way of dealing with a future that is not strictly positive. Today Turkey finds itself caught between two established ways of formulating the future. On paper it is a secular country, something that the nation’s founder, Mustafa Kemal Atatürk, believed was a prerequisite for modernisation in the 1920s. However, the Muslim justice and development party, the AKP, has been in power since 2002. In the most recent elections last summer they received more than half the votes. Many secular regulations are now being undermined. At the same time the AKP is struggling with its approach to the EU. A major part of the debate right now involves which direction the country should follow.

Ekin Sanac and Berna Göl, who are the Turkish duo Kim Ki O, do not really see the EU as the solution to Turkey’s problems. The government is fundamentalist, and only politicians and businessmen believe that the EU can make a difference. The populace has other things to worry about. Istanbul might feel like any typical large European city, but on the country’s south-eastern border they are fighting against the Kurdish PKK. In the suburbs people are just trying to put a roof over their heads. And in the pursuit of international recognition, the government has suddenly prohibited smoking indoors, the suburban poor’s only luxury. There is no talk of freedom, only new rules to follow. 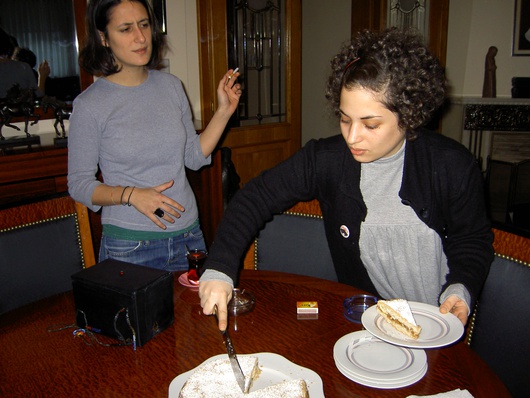 The last cigarette is extinguished and the teacups are empty; Ekin places herself in front of her Korg MS2000 while Berna tunes her bass. The playlist is ready for the concert. Ekin alternates between keyboard and drum machine, keeping track of the sound and samplings. Berna sets the foundation for the songs. They take turns singing with their eyes closed. It sounds soft and well thought-out, a bit like if Joy Division would double the electronic element and replace Ian Curtis’ harsh voice with a soprano.

Fifty-five minutes and twelve songs through crackling PC speakers later, Berna is standing at the roadside waving to a dolmus, a Turkish taxi bus, which pulls up with open doors. She hops in and tosses a five-lira-note to the driver. She is on her way back to work at the architectural firm and she is in a hurry. The streets are packed with cars. When a police car swishes by in the emergency lane, they driver sees his chance and follows. The enormous suspension bridge, illuminated in purple, is visible behind his head. It carries millions of Istanbul drivers between Europe and Asia daily.

Along the way, Berna points out buildings and explains how the areas identified as cultural have suddenly become construction zones. Those who have money can mostly do as they want. She continually excuses herself, but cannot help but worry about how the city is being developed. And the system clearly has numerous shortcomings. It is still far too corrupt to win over Brussels. Berna herself missed out on a position at the university because the grant was withdrawn without warning. Our dolmus comes to a stop near Taksim Square in Beyoglu, the centre of the new part of the city. Berna runs off towards the office.

It is Thursday afternoon and the sun is starting to set over Istiklal Caddesi, Independence Avenue, in Beyoglu. It is here in this district that Istanbul’s night life has its centre. The city’s indie scene has grown in recent years. Before, all the bands played covers, but now more are beginning to write their own material. And more international bands are choosing to visit Istanbul. MySpace is a unifying force in the scene and there are increasing numbers of venues for unsigned bands to play, but there is still a lack of small recording companies interested in anything other than hit songs. Kim Ki O found the solution through contact with Sweden, but they hope that others can also have the opportunity at home.

The aroma of roasted chestnuts tantalises the nose, but that is not what is sweeping over the street in a white haze. Neon signs entice customers to bars and restaurants, kebab meat glistens at fast-food stands and the street’s crowd has dispersed somewhat. Berna and Ekin walk arm in arm, as always. We turn onto a side street and end up in an area filled with posters and street art. Outside of Babylon, the venue for the evening, we meet mama Inci, upright and elegant, together with a group of her friends. Time for a sound check. 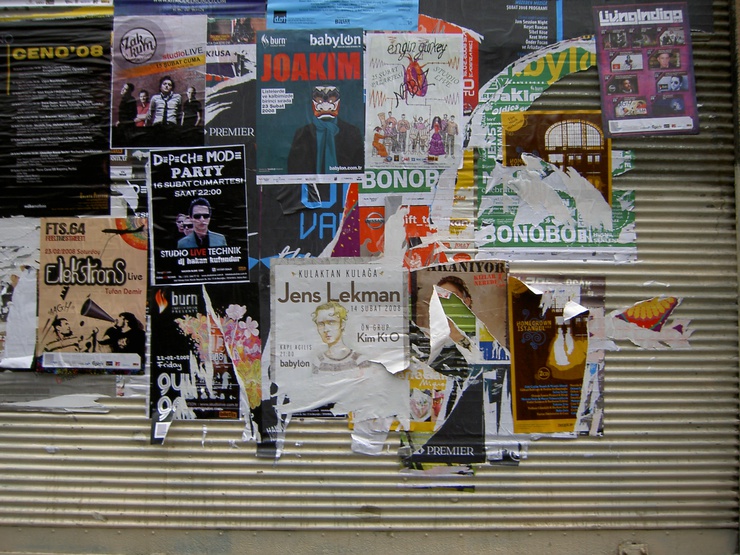 A few hours later, after some Efes Pilsner and roasted chickpeas in the adjacent lounge, Kim Ki O are ready. It is time for the show. Their parents are up on Babylon’s balcony and Ekin’s boyfriend, Baris, the DJ for the evening, has just played an old favourite. The club keeps filling with people. It becomes dark and Ekin looks ice cold when she presses play on the cassette player. Berna tries to ignore her mother’s drunken friend repeatedly screaming her name. The bass lines drift through the club. Fifty-five minutes of play time, exactly as calculated. The sound is considerably better than on the living room’s makeshift sound system. It is not just friends and parents listening tonight. All 300 tickets sold out, and Ekin’s mobile phone has been ringing constantly throughout the day, when acquaintances realised that there is a guest list.

Shortly after Jens Lekman’s set, Babylon begins to empty of people, the most devoted gather shivering outside on the street. Ekin is on a step a short distance away, sipping vodka. At first she seems as cool as usual, but she soon explains how happy she feels. The concert went well and soon they will head off. Everything is like a dream. Now it is time for a little Turkish drunk food before paying a visit to the three-storey night club.

A few days after returning home, I received an email from Ekin. Tomorrow Kim Ki O will leave Turkey for Europe. Her computer has crashed and the workload has increased, but she has never been happier. That is in spite of the fact that the concert in France has been cancelled – the Schengen Visa does not permit work. But they plan on being in the audience in Paris, anyhow. ’It’s okay; we’re used to the disadvantages of being Turkish. It’s bureaucracy, you can’t fight it.’

*This is the second part of an article which won the European Young Journalist Award 2009 for Sweden. It was first published in May 2008