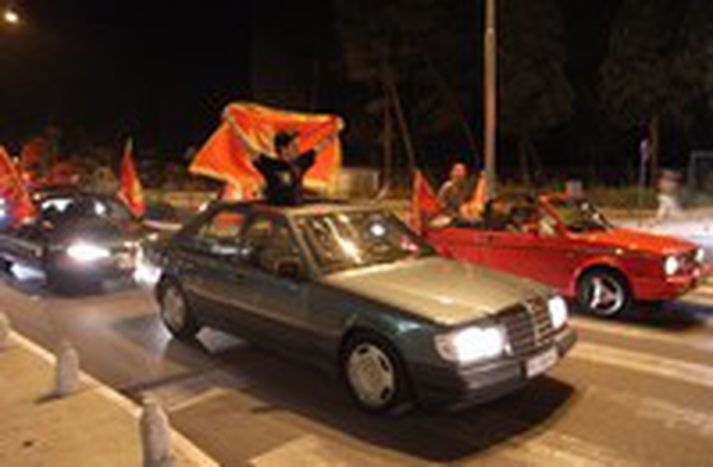 Sunday 21 May 2006. Europe welcomed a new state into the fold. Montenegro was reborn, and the last traces of the former Yugoslavia vanished

"Tonight, with the majority decision by the citizens of Montenegro, the independence of the country has been renewed," said a jubilant Prime Minister Milo Djukanovic on Sunday night. Despite fears of deadlock, the last remaining vestige of former Yugoslavia had ceased to exist.

Welcome to the party

“Our new Montenegrin house will be big and comfortable for everyone,” Djukanovic stated, adding that he also congratulates “Serbia on its independence.”

According to diplomatic sources in Podgorica, Montenegro’s independence will represent a shock for Vojislav Kostunica’s government in Belgrade, which had hoped that the union between Serbia and Montenegro would survive.

Chaotic scenes erupted in Podgorica just one hour after the polling stations were closed and the first unofficial results confirmed that the majority of around 480,000 Montenegrin voters had opted for independence. Young people perched on the roofs of their cars bearing flags, chanting “Viva Montenegro” in the midst of a great thunder of fireworks and guns shots.

In the meantime the Montenegrin opposition accused the government of precipitating the result by starting the celebrations before the official results were announced. Predrag Bulatovic, the leader of the opposition; called the fireworks “aggressive” and appealed for calm amongst his supporters, exposing the deep division between the pro union and independence blocks.

“I urge the government to call on their people to move away from the streets and go home," Bulatovic said on Sunday night, adding that his group was trying to restrain its own supporters from coming out into the streets as well.

Montenegro’s independence marks the final phase of the disintegration of the former Socialist Federal Republic of Yugoslavia, which fell apart in bloodshed at the beginning of the nineties. This year a decision will also have to be made regarding the final status of Kosovo – currently an international protectorate where the majority Albanian population also wants independence from Serbia.

Earlier on Sunday the voting in Cetinje, old Montenegrin capital, proceeded in a democratic and peaceful manner. The atmosphere in the town was optimistic but defiant. Some shop windows in the town summing up the general mood with signs saying: “the judgement day.”

“Independence means we can open our doors to Europe,” explained Milica, an independence supporter from Cetinje.  According to her, the new Montenegrin state should have ties with Serbia, “however our future connection to Serbia should not privileged over our ties with the other countries of the Balkans.”

Polling station number 23 was located in one of Cetinje’s chess clubs. Inside, we found Prince Nikola Petrovic Njegos, a descendent of the Petrovic dynasty that were dethroned in 1918. He expressed his hope that his family name would be finally cleared.

“Mr Djukanovic said that it would be an obligation of a new Montenegrin state to rehabilitate the name of the dynasty,” he said. Mr Petrovic, an architect living in Paris, said he had no political ambitions, but “if Montenegrins tomorrow decide to return to the monarchy, I won’t say no.” He added that he hopes he could reach a gentleman’s agreement with the government over the property belonging to his family.

Later on he walked to his grandfather's palace in Cetinje, now turned into a museum, where he greeted the group of French tourists with the words "welcome to my home."

At the Cetinje monastery, the official seat of Serbian Orthodox Church ever since Montenegro lost its independence to Serbia in 1918, Sunday mass was being held.

Amongst those attending the mass was Bigovic Vesko, a private entrepreneur who was against split with Serbia.

He said that many of the pro-union supporters working in the civil service and private companies owned by pro-independence supporters “had to vote for independence if they didn’t want to loose their jobs.” He said that voting for preservation of the union with Serbia “was a natural thing” and represented “the interest of all Orthodox Serbian people.”

However, pro-independence supporters believe that now the question of statehood is resolved Montenegro will have a greater chance of getting into the EU and dealing with the pressing problems the country is facing.

“This government has spent years profiting from the unresolved state question. Now the real challenge starts,” said Balsa Brkovic, a leading Montenegrin writer. But like it or not, the challenge has started.