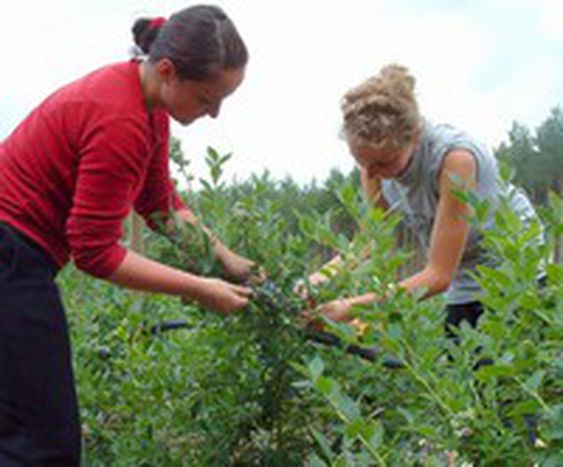 Migrant workers from the East

Because migrant labourers work for pay far below what native-born workers accept, they are blamed for high unemployment rates in their destination country. A visit to a German farm puts the tensions of globalisation into focus.

Joerg Buschman, a bullnecked man with a ruddy, weathered face, sits next to me on a country wagon and begins his story as we set out over a bumpy forest trail. "You know, the town’s eastern train station used to be called the Silesian Train Station. People have been coming from the Silesian region in Poland to help with the harvest in Berlin for at least 100 years. It was good business in those days and we welcomed them with flowers and open arms." People still come looking for work but they don't get flowers when they arrive anymore.

"Firm and with a spicy kick"

The main crop at the Buschmann and Winkelmann farm is asparagus. But since asparagus season is over, the grounds show few signs of activity - except for some Polish women standing about among huckleberry bushes. Wooden signs boast that these berries are especially "firm and with a spicy kick”. Chatting and laughing, the women move in pairs from bush to bush, picking berries. Each pushes a small wooden cart, with which she'll deliver a day's labour to the headman. Armed with a scale, he'll painstakingly weigh each load and note the yield per worker to determine her pay.

The means to an end

The typical labourer picks about 30 kg a day when starting out, but experienced pickers collect as much as 100kg. "It's pretty stressful”, comments Dominica Swobocz at midday. Bend, pick, stand up and over again. 20-year-old Dominica leaves barrack-like lodgings 8 km away with the other women to come to work. Buses bring them to the fields well before 7am. She breaks once for lunch and usually her day ends at 6pm, if no extra tasks come up. In broken English, Dominica explains why she does such difficult work: "I do it for the money." Back in Rzeszow, she studies Marketing and Administration. In Poland, the €650 she makes counts as a sizeable investment towards her education. She fits the Buschmann picture perfectly: "Polish people who come here want something out of life. They have goals beyond buying a new TV." Workers from the new EU countries don't let anything stand in the way of their economic aspirations. They are allowed to work in Germany for 4 months as migrant labourers without a residence-permit, although they do need a work-permit. Still, the work-permit is a mere formality; the key qualification is not being under-age.

The Germans aren't up to it

"Take a Polish person, who comes here and also has a job on a farm in Poland. Then consider an unemployed German. The Polish person is getting things done while the German doesn't lift a finger," says Buschmann. Defending his use of Polish migrant labour, he mentions how he's tried to work with the German department of employment. “They sent me people with back problems. One woman could barely see and used her cane all over the fields." Buschmann views the results of employing Polish labourers favourably: "Without them, the farm would be out of business. They don't take jobs away, they create them." Bushmann's farm employs labourers for 70 positions. Although he benefits from the recent EU enlargement, he feels a little uncertain about the future:" We've certainly prepared the way for future enlargements south, but whether we can survive them is another question."