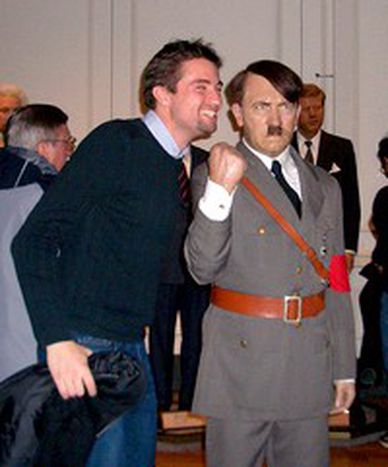 Jewish director Dani Levy has broken taboos with a controversial new comedy about Hitler. The Germans once again ask themselves: Can we be allowed to laugh about Hitler?

Sometimes you just have to watch some films, because everyone else you know has seen them. Such a film is now arriving in German cinemas: ‘Mein Führer: The Truly Truest Truth About Adolf Hitler'. It’s a comedy about the Third Reich and to add to the controversy, is helmed by a man of Jewish decent.

Adolf Hitler (Helge Schneider) is at rock-bottom, depressed and irritable because the war is as good as lost. The minister of propaganda Joseph Goebbels (Sylvester Groth) is desperately trying to rally him to hold a big speech in the middle of Berlin, just like in the ‘good old days’. Hitler needs a motivator, and Goebbels calls upon a Jewish professor of drama, called Adolf Grünbaum (Ulrich Mühe). He is promptly freed from the concentration camp of Sachsenshausen, and with the help of breathing exercises and psychological tricks returns Hitler to the state of a proper dictator, albeit harbouring a bad conscience.

The film is assured of much critical attention. Ulrich Mühe shone this year in ‘The Lives of Others', for which he garnered the European film prize. Hitler portrayer Helge Schneider is one of the best known German comedians. Director Dani Levy won the Ernst Lubitsch Prize in 2005 for 'Go for Zucker!' a comedy about a Jewish family, and now he is zealously copying the patron of the prize: In 1942 Ernst Lubitsch directed the Nazi comedy ‘To be or not to be' in Hollywood, which until now was the only Nazi comedy of a German director. Newspaper inches have already been dedicated to Levi’s film. But before ‘Mein Führer’ hits the cinema screens, the Germans are forced to once again come face to face with their past. Should one be allowed to laugh at Hitler?

Dani Levy believes one should. And indeed you can’t help doing any different. There’s the image of Hitler the miserable little worm to contend with, as he plays with himself in his bath tub, sinking little warships. Then there’s the human element when you find out that the cruel dictator was beaten by his father when he was young. Unfortunately Helge Schneider’s Hitler interpretation is the only funny thing in this film. It sticks to the usual tracks, especially with the Jew Grünbaum as the narrator. His story is too serious to be funny. It’s just not easy to laugh about concentration camp prisoners.

In the end we are left with the knowledge that Hitler as a person must have been not only cruel and inhumane, but also ridiculous. On the one hand ‘Mein Führer' is good for a few smug nasty laughs, which viewers in the rest of Europe can share, but for them the film will be above all one thing only: politically correct.

‘Mein Führer: The Truly Truest Truth About Adolf Hitler' opens in Germany on January 11. Over the course of the coming year, it will reach other European cinemas.