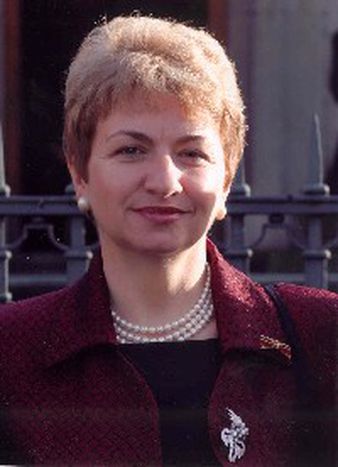 Meglena Plugtschieva is described as a workaholic by the Bulgarian media. When the then deputy agriculture minister was transferred to the embassy in Berlin, two people were needed to fill her place. Shortly before, in September 2004, Bulgarian and German newspapers had reported that the Bulgarian ambassador in Berlin, Nikolay Apostolov, was being recalled. He had been driving whilst under the influence, zig-zagging through a residential area. At a vehicle spot check he drove over a policeman's foot. When Meglena Plugtschieva was called to Berlin following the incident, a colleague at her leaving party gave her some advice – “In the mornings, when you look in the mirror, from now on you will see the face of Bulgaria. That brings obligations with it.”

At the moment she doesn't have a free day on which to brunch, and so we have a chat over coffee at the end of the working day. Plugtschieva is wearing a pale suit highlighted by a colourful silk scarf. She speaks in a soft tone of voice, and her considered manner belies the optimism in her voice. Germany has become a “second home” for the 50-year old, who learned German at a foreign languages secondary school in the town of Varna on the Black Sea. Until the end of the 80s, visiting teachers from the former GDR used to teach at foreign language secondary schools, which were able to independently select their pupils through gruelling tests in maths and literature.

”The German teachers not only taught us the language. They taught us to be respectable, reliable and dutiful” the diplomat recalls. Even today she admires the dedication, professionalism and the high morals of many German politicians – both on the left and the right. “Let's not pretend – Bulgarian politicians would do well to take a leaf out of their book.”

Even before the events of 1989-1991, Plugtschieva was a member of the Communist Party. “Like 90 per cent of all Bulgarians” she says. That was obiknovenata praktika - “standard practice.” The party was renamed the Bulgarian Socialist Party in 1991 and the current president is a member. However, it was not just 'standard practice' that led her up the career ladder; Plugtschieva was helped by her thorough knowledge of Bulgarian forests and woodlands, obtained while taking a PhD in forestry. During the Communist era, Plugtschieva was deputy director of the forestry ministry in Varna, and after 1990 she became responsible for international relations in the forestry commission in Sofia.

“In my role as forestry expert,” Plugtschieva says, she accompanied the then bosses of Mannesmann and Thyssen-Krupp whilst hunting. In 2004 Meglena Plugtschieva was awarded the Bundesverdienstkreuz (Federal Medal of Honour) for her services in promoting good economic and political relations between Bulgaria and Germany over the past 15 years. Plugtschieva is particularly fond of Scherba, a forest in Kodschabalkan. It is, "One of my favourite places, along with the Bulgarian coast along the Black Sea.” The diplomat has a tendency to rhapsodise when she speaks of her home. “Bulgaria is an amazingly beautiful country. Time and again I see foreign guests genuinely fall in love with the country.”

But unfortunately journalists paint a false picture of her country. “It annoys me when journalists view Bulgaria through their very narrow lens.” "They mainly write about corruption and organised crime even though crime level are lower in Bulgaria than in many other countries which have been members of the EU for quite a while" she continues. "And even though Bulgaria enjoyed economic growth close to 6%, the media chose to ignore this." Like this fears and mistrust about the EU candidate country are able to seed and take root.

Plugtschieva is convinced that the accession of Bulgaria will bring a new energy to the EU. The ups and downs of history have made the Bulgarians adaptable and flexible. The diplomat is also convinced that Bulgaria's rich culture will have something to offer the EU. She notes the UNESCO-protected artistic treasures in the Kazanlaker grave, in the Rila Monastery, and in the church in Bojana. That is not the end of Plugtschieva’s list of good things about Bulgaria: “The almost magical music from Pirin, the Cyrillic alphabet, and, don't forget, our great enthusiasm for the European idea…”

So what is a workaholic's working day like? It begins at 8.30 and usually lasts 12 hours, and tends to be “exciting and dynamic”. Plugtschieva, mother of two grown-up children, travels a lot, gives speeches, holds presentations and meets with politicians, business people and students. But a diplomat also has not such pleasant duties: “Our Embassy near Checkpoint Charlie is pretty run down.” Repairs, problems with unscrupulous craftsmen, and difficulties with the prehistoric telephone exchange all take up a lot of time. But even in these matters Plugtschieva remains diplomatic: “I don't want to complain.” None the less, she would rather have spent that time beating the drum for Bulgaria.