In this historic Athens district – the city's anti-establishment heart – the police dare not set foot. At the same time, this symbol of the anarchist movement is becoming a trendy place. In any case, Exarcheia continues to keep alive a particular spirit that has characterised it for decades. Welcome to the home of "urban resistance".

Not far from the central Syntagma Square, if you continue up Solonos Street, you'll soon find yourself in the alleys of one of the more alternative districts of Athens. In the tree-lined streets, cafés and bars are sprouting up on every corner, often independently managed. Trendy restaurants and old-style tavernas, print shops and independent bookstores, music vendors and small boutiques – all form the backdrop to the district's central street, on one side climbing up Strefi hill, and on the other, the north side of Lycabettus.

Around the triangular Exarchion Square in the heart of the neighbourhood, there are no less than four self-managed buildings. Here you can follow free language courses, you can drink a coffee or help prepare to welcome refugees. Accommodating artists, students and intellectuals, Exarcheia is the "independent" district of Athens and the headquarters of the anarchist movement. 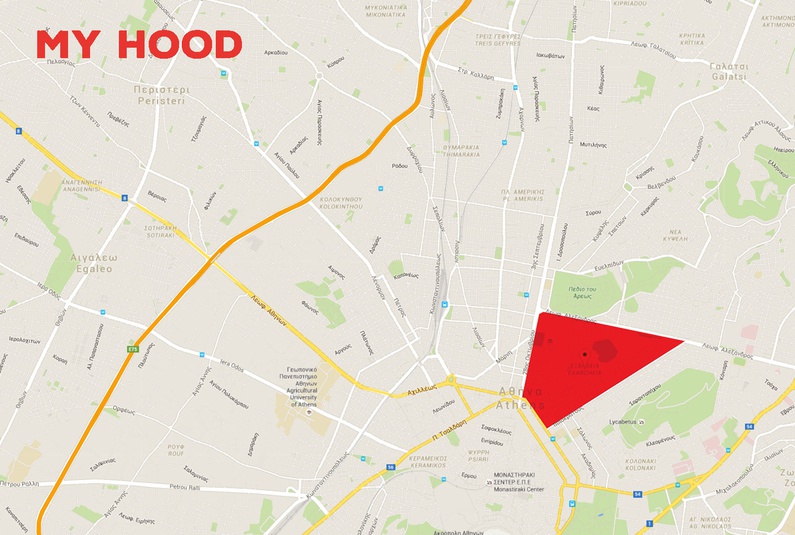 The history of this district is written on its walls, expressed through the graffiti of all styles and shapes that colour the streets. Old and dilapidated, many buildings are uninhabited. You may often come across a half-shattered flowerpot or a broken step: remnants of the night's clashes between police and anarchists. The culture of resistance, a prevailing trait in this area of the city, has its roots in the years of dictatorship that ruled Greece until 1974.

In these streets the big protests of 1973 broke out, when the tanks of the military junta stormed the polytechnic on 28 Oktovriou Street, just a short distance away from Exarcheia's main square. After the fall of the dictatorship, the district became the cradle of a variety of political turmoil. After being banned for years, these movements saw a resurgence after the reestablishment of democracy. Cultural gatherings, libraries, cinemas and independent print works sprang up on every corner. Many uninhabited buildings were occupied once more and reclassified as community centres or popular bars. 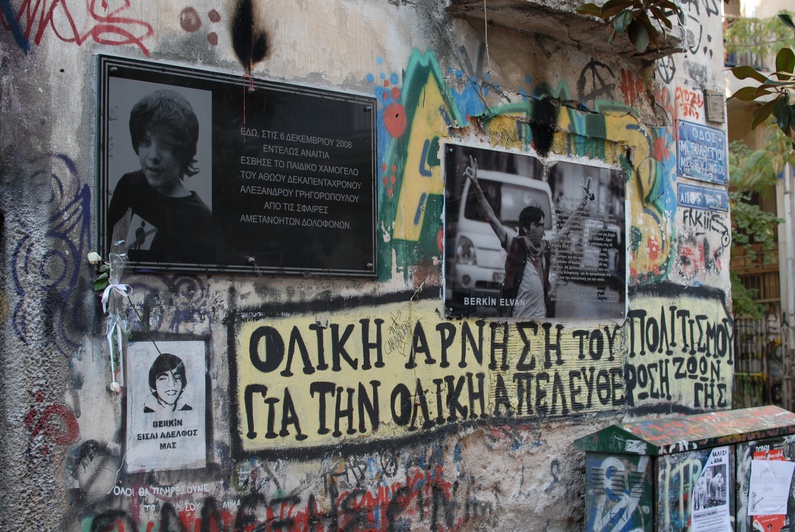 In 2008, the district once again witnessed a political explosion when a policeman shot and killed a boy of just 15 years of age, Alexandros Grigoropoulos. Exarcheia was the heart of the following revolt that raged across the city for weeks. In Mesolongiou Street, where the boy was killed, his friends posted a commemorative plaque. In front of it grows a tree planted by his mother. The memorial has become a shrine; you can often see people stop to leave flowers. Law enforcement authorities, given the area's history, are not often seen in the neighborhood. Police rarely dare set foot within its borders. When it happens, clashes often occur.

Subtitles are available in English (by activating function at the bottom right of the player).

Exarcheia – in addition to being the seat of those who say "no" to the system – is fertile territory for grassroots initiatives. This is emphasised by Michalis (65), who knows the history of every nook and cranny. "Besides the much gossiped about anarchist 'black bloc', for which the media reserve greater attention, an alternative society is constructed in Exarcheia," he explainds, "where solidarity and participation are the key words."

Walking along Navarinou Street, at the corner of Zoodochos Pigis, you come across a small triangular park. The area, intendedto be a car park, has flourished thanks to the initiative of local residents who uprooted the asphalt and now take turns to water the plants. There's a bench, a social garden and a small playground alongside parking spots. It's become the green lung of the neighbourhood. "Their parking, our park," was their slogan. 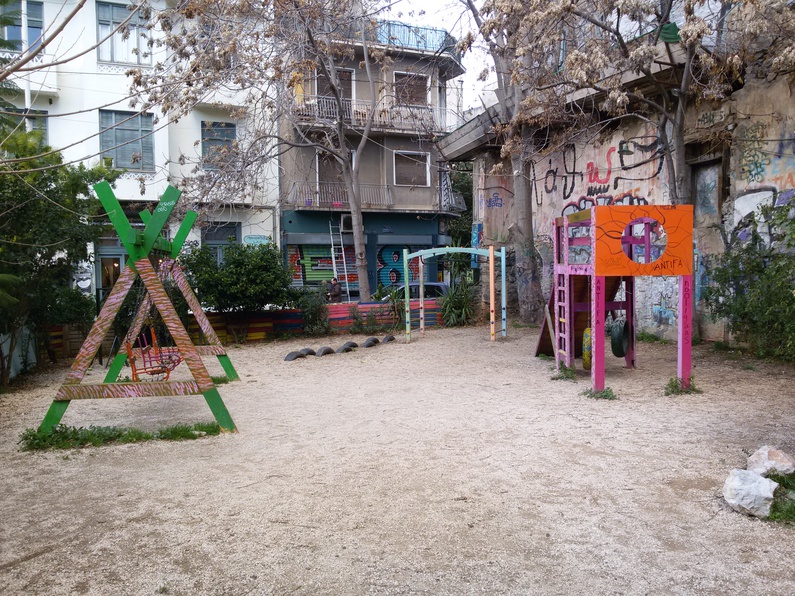 The district is full of places that came about in similar ways. One of the most well known is the Vox, a distinctive independent café that overlooks the main square, on the side of Ikonomou Street. The bar, opened three years ago, is the perfect place for those who like to enjoy a beer with friends at an affordable price.

Turning the corner, in Tsamadou Street, there is Steki, another independent establishment, where every day you can see a parade of people of different nationalities. Here, free language courses take place, open to anyone who wants to participate. Very often the lessons are attended by refugees and other migrants, many of them staying in the nearby Notara or Themistocleous streets, where activists have organised space to accommodate them. 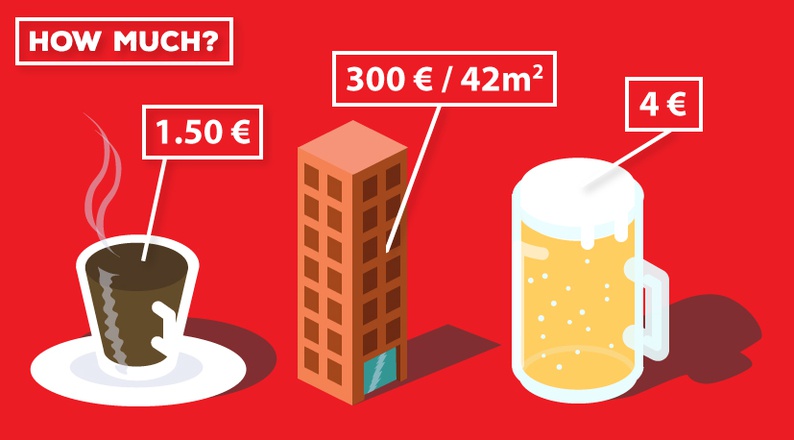 Over the years, the neighborhood has started to change. It is becoming more recognisable to passing tourists and increasingly inhabited by foreigners; living in Exarcheia is becoming cool and fashionable. But despite the gentrification that is timidly knocking at its door, Exarcheia continues to keep the spirit of resistance and solidarity, which has characterised it for decades, alive. 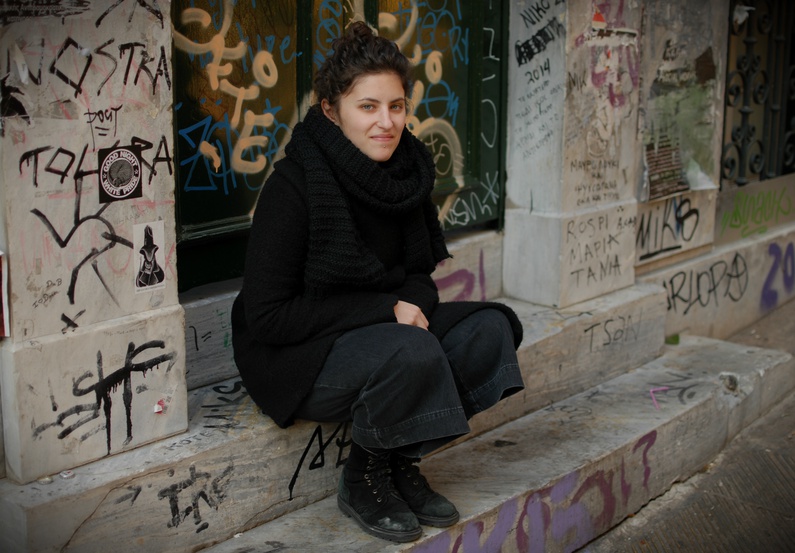 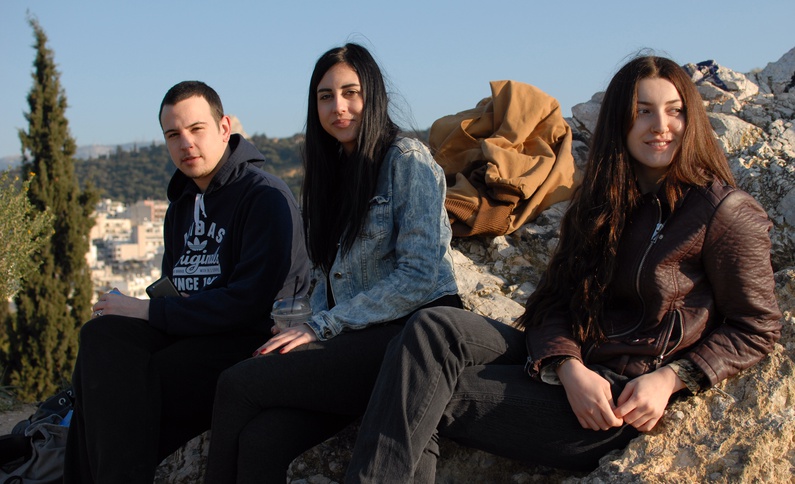 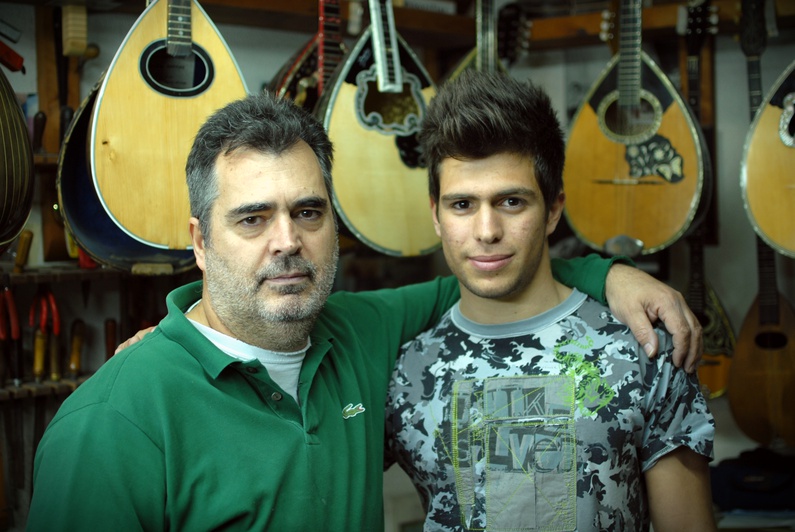 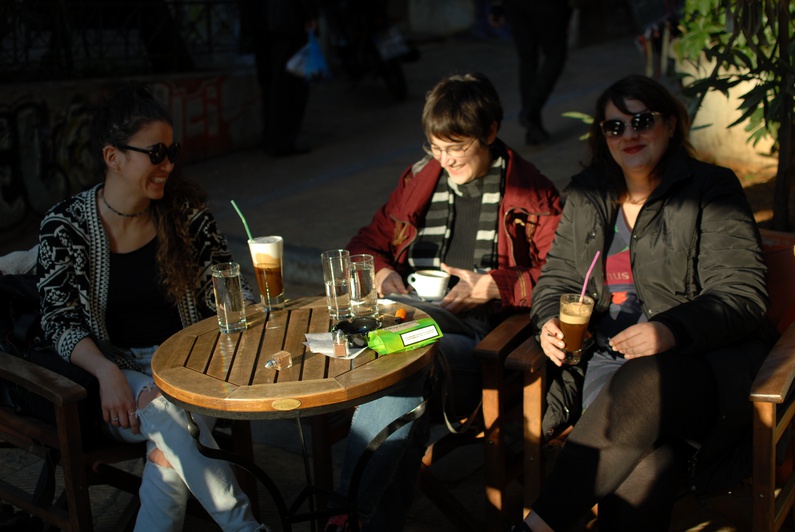 Although the political vitality of the 70s has progressively weakened, Exarcheia remains a Athens district that's full of character. Here, students, artists and intellectuals continue to meet in the numerous cafes and political and social initiatives are carried out daily. Exarcheia does not reflect the reality of Greece, and does not even represent that of Athens. Exarcheia is a social laboratory – in some ways a vanguard. For others, it is an oasis condemned to isolation.

The "best of" the district 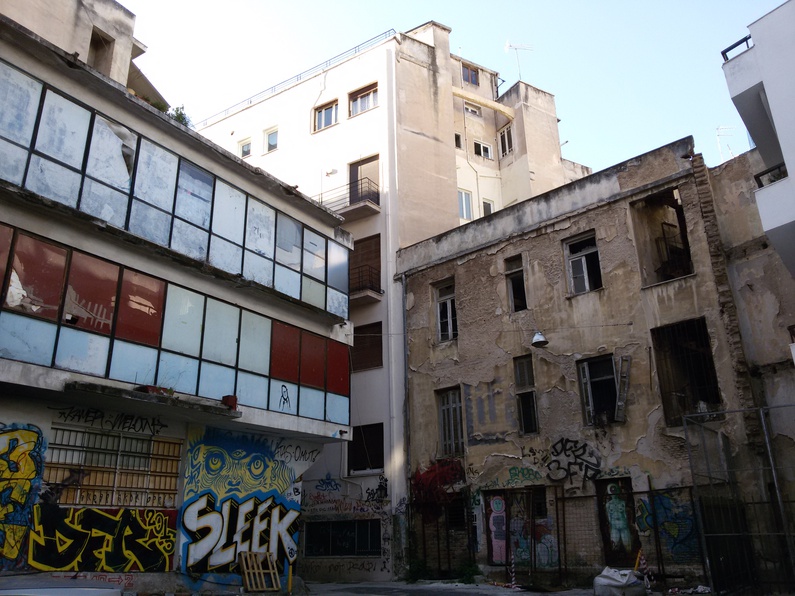 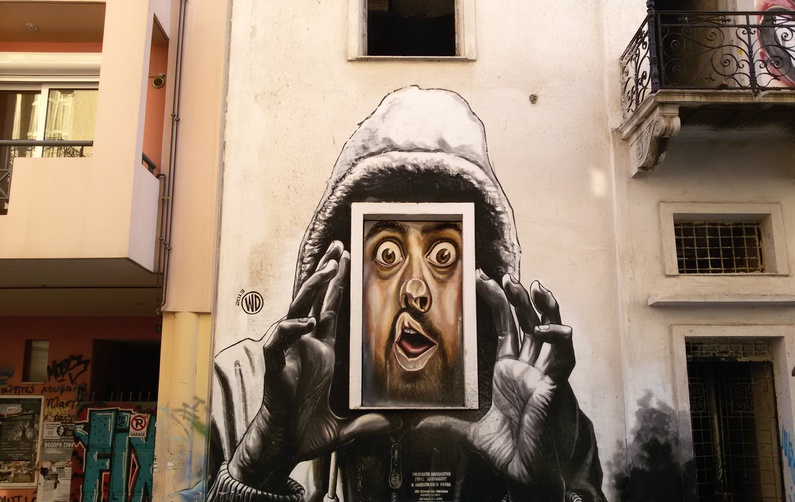 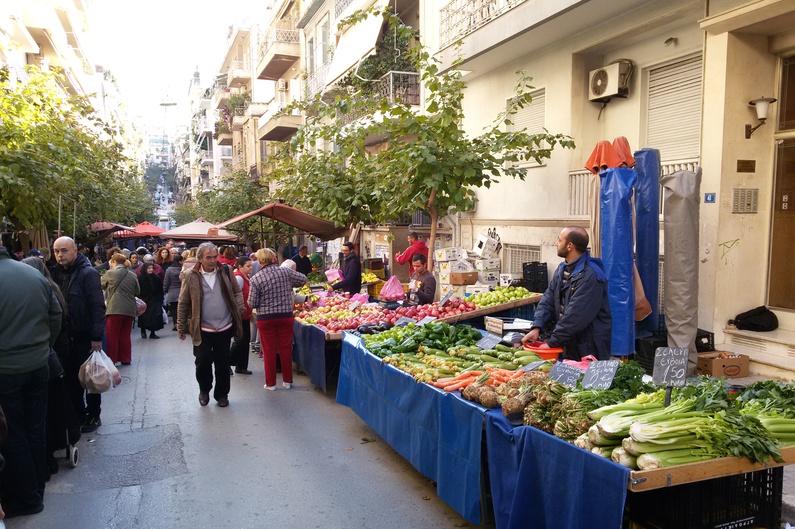 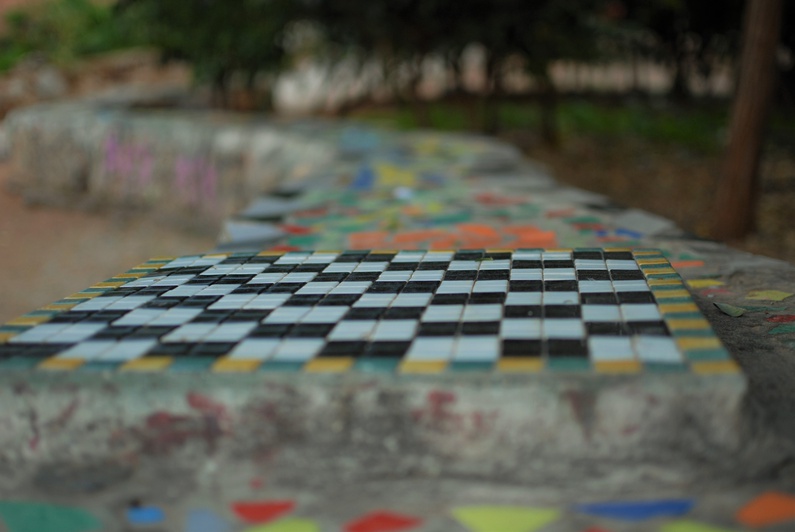 Archaeological Museum: 44, 28is Oktovriou Street. The largest museum in all of Greece, housing one of the richest collections of Hellenic art in the world.

Exarchion Square: At the corner of Arachovis Street you can sit and enjoy a beer at Vox (in Greek BOΞ). Opened in 2012, it often offers live music. Or go to the cafes at the front of the square and choose a frappe at the library/bar Floral, in a historic blue building. Then delve into the many alleys that branch off from the square and go explore the rest of the district.

Mesolongiou Street:  Take a walk and stop on the corner of Koletti Street, choose a bar and sip an ouzo with ice in the summer; a warm rakomelo in the winter (a drink with a basis of raki, honey, cinnamon and cloves). If not, take a raki (the local firewater), great for all seasons.

The Saturday market: If you happen to be around on a Saturday morning, in Kallidromiou Street, you can take a look around the market, buy some fruit or drink a coffee at the little bar in front of the fish stall. Ascend one of the many staircases and climb up to the top of Strefi hill. From there enjoy the view of Exarcheia, which includes the Parthenon in the background. It's well worth it.