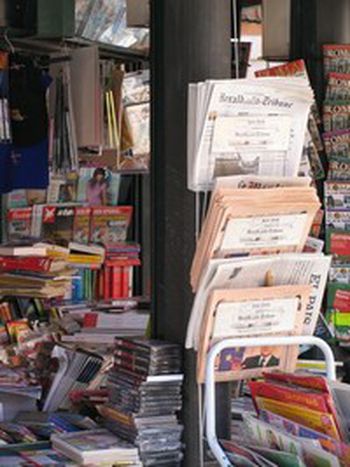 The international media is dominated by America. In Europe, some are calling for mergers to create an alternative. But in doing so, might we not undermine our own plurality?

Both the energy and banking sectors have recently seen a spate of mergers. This pattern looks set to continue in the media sector. But while these mergers have been assessed in terms of their effect on competition, it would be a mistake to evaluate media mergers just in these terms. The freedom of expression and information is enshrined in the European convention on Human Rights, and any moves to create large media conglomerates could impact on this right.

Currently, any media mergers are assessed as to whether they damage competition. Too large a company will undercut consumer choice and impact negatively on competition. Such a process has happened in America, where sixty years of stripping away competition law has left huge monopolies and little space for local diversity; radio giant Clear Company is almost four times the size of its nearest competitor.

These are the type of problems that occur with a merger in any industry. But there is a second, related problem. Democracies rely on a plurality of voices. Domination of the media market by a few companies ultimately threatens the basis of our democracy.

It might seem strange to talk about these problems in an age where we download Polish blogs onto French mobiles and our access to information is more diversified than ever. Yet it is these forms of connectivity that present new problems. For while our news sources might be more varied than ever before, the companies which allow us access to them are becoming increasingly centralised. These gatekeepers control the infrastructure and raise questions of equality of access. There are just two main cable operators in the UK and Ireland, and just three in the Netherlands.

A further problem is vertical mergers, with companies such as the German Axel Springer increasingly owning both the production and distribution of its media. Diagonal mergers also pose a problem for plurality within Europe: the German Bertelsmann has recently started to work in broadcasting as well as publishing, and this raises questions of the re-use of journalists work.

The only existing legislation is national, and in a globalised media industry, it is increasingly unable to guarantee the freedom of media.

Looking around Europe, it becomes apparent how many voices are being smothered. In Italy, Berlusconi, as in other areas of the economy, has a massive dominance of the media. Taking advantage of the absence of regulation during the 80’s, Berlusconi’s three television channels now have a 45% audience share.

The problem is not just that a single voice can be heard above all the others: it is that this voice might not even be a local one. In the Czech Republic, 80% of all newspaper and magazine ownership is concentrated in the hands of Swiss and German firms. Axel Springer Verlag, one of Europe’s largest media company’s, owns FAKT, Poland’s largest daily newspaper and Germany’s Bild, the best selling daily in Europe.

This process is of even more concern in countries that have not yet developed large media infrastructures, and where foreign ownership can stifle the development of an independent media. Central European Media Enterprises, a Bermuda based country, acquired 100% of Nova TV Croatia in July 2004; it remains to be seen whether their priorities will be the same as those of the people of Croatia.

While some national legislation is very rigorously protective of local content, as is the case in France, there is no coherence between the European states.

One law to rule them

At present, the EU does not provide any legislation that deals exclusively with media ownership; all such legislation is dealt with at a national level. Any rulings made at this level are checked by the European Commission to ensure that nothing hinders the establishment of a common market. This is not enough.

Any such checks look at whether a merger will impact on competition, not at freedom of media issues. While the Commission's activity lowers the barriers to entry in the media market and allows new voices to emerge, it is a completely inadequate framework for dealing with the media in Europe.

The EC Merger Regulation neither deals with the problems of gatekeepers, nor the problem of multinational actors investing in different markets. A European legislation on media ownership is sorely needed before any further mergers take place – else we threaten the voices upon which Europe is built.