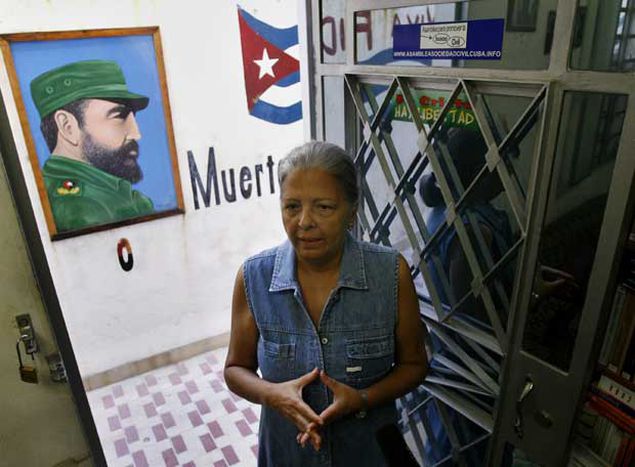 The tiny Caribbean island has again become the centre of attention throughout the world after the US detention facility Guantanamo Bay was closed on 21 January. President Raul Castro is due in Russia on 28 January. Interview with the economist and dissident

Martha Beatriz Roque, 62, an economist by trade and resident of Havana, is one if the leaders of the political opposition in Cuba. The dissident is a member of the ‘Pro tempore secretariat of the agenda for transition’, a coalition which denounce attacks against freedom of speech, support human rights on the island and the arrival of democracy. She has been imprisoned twice by the ‘Castro’ regime. In April 2003 Roque was sentenced to twenty years imprisonment. However, she was freed due to pressure from outside of Cuba and her own ailing health. What are the politics of the European Union towards Cuba?

In Junr 2008 the European Union withdrew its sanctions on Cuba; something that the USA does not agree with. What do you think about this decision?

With the ‘agenda for transition’, we came up with a document in which we warned of the consequences of these measures being lifted. What we said would happen has happened – a huge increase of repression within the country – a product which has been yielded to the way that the government want.

Felipe Peréz Roque, the Cuban minister of external relations, has criticised the opposition in front of Spanish foreign affairs minister Miguel Ángel Moratinos on two occasions. At one time, he said that we were mercenaries and I didn’t protest, no way. On another occasion, he said that there were no political prisoners, and I did not protest again. Consequently: which political prisoners can they talk about in conversations between the European Union and Cuba if their own minister of foreign affairs states that they do not exist and they accept that?

You harshly criticised the Spanish government's policy on relations with Cuba.

Yes, the Spanish government wants to make it seem that they are talking with the opposition and with the government, but this is not true. The Spanish government is defending the interests of Spanish businesspersons in Cuba, which is unfortunately not as important as the interests of the Cuban people, such as the lack of freedom, many breaches of the universal declaration of the human rights, harassment and repression inflicted by the Cuban government.

Spain prefers to protect their economic interests than to defend  democracy

This does not concern the Spanish government, a country whose constitution is based precisely on the fundamental principles of the universal declaration of human rights. They prefer to protect their economic interests than to defend democracy.

What measures must the European Union take to promote a democratic process in Cuba?

They have said that, if they go ahead, they will come to Cuba and talk with the opposition; this has not happened. In October 2008 Markos Kyprianou, the Cypriot minister of foreign affairs, came to Cuba. His country is a member of the EU and he did not meet with the opposition at all. Moratinos kicked off this trend himself; on various occasions he has been and left Cuba without meeting the opposition. This implies that the European Union is treating the Cuban opposition like dirt, as if we do not exist.

US president Barack Obama has promised to lift the Bush administration travel restrictions to the island for Cuban-Americans (travel to Cuba is limited to once every three years), and the sending of money. Do you think that the new president can improve US-Cuba relations?

Unfortunately at the moment there are many problems on the island after three hurricanes ravaged the island, so that anything with respect to US foreign policy is a lesser priority, as we have so many domestic needs. Anything that can help us from an outside point of view is welcome, but it is very difficult to evaluate this policy now.