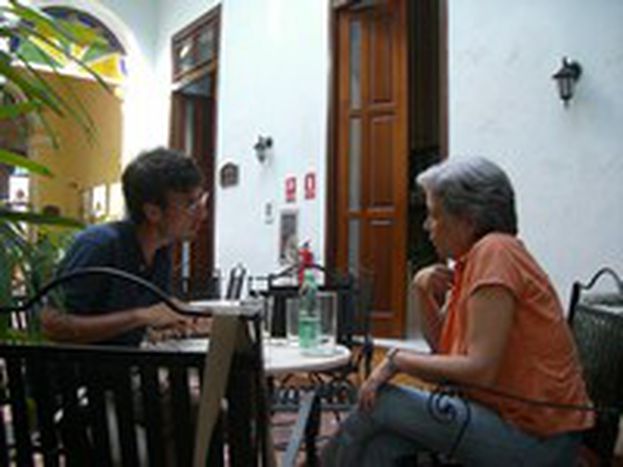 As Fidel’s poor health forces him to hand over power to his brother Raúl, the sixty-year-old Roque denounces the neglect of her people and the regime of ‘apartheid’ enforced in Cuba. This is her story, told in very special circumstances.

"Atención, we are being filmed.” The interview has not yet started and the indignant look of the Cuban dissident Martha Beatriz Roque already cuts through the humidity of the patio. We are sitting in one of the many hotels in Old Havana owned by the company ‘Habaguanex’ but controlled by the state. A woman nearby is posing as a tourist although she is clearly of Cuban origin. The subject of the film is not her, it is us.

The country is for everyone

Sixty-year-old Roque does not seem particularly surprised: “There were months when I was photographed every time I stepped into and out of my house.” But why is she now put under special surveillance by the Fidel Castro’s communist regime? “It all started in 1989. I was teaching economics at the University of Havana and during one lecture I criticized the execution of General Arnaldo Ochoa, an ex-hero of Castro’s revolution who was accused of trafficking narcotics. A few days later I was sacked.” Roque's dismissal occurred just as the country sank into an economic crisis because the commercial agreements with the USSR which allowed Cuba to export sugar at an inflated price and to import petrol at a preferential rate had been suspended. “Between 1989 and 1995 no official statistics were published,” she points out. “Because of this we decided to set up the Instituto Cubano de Economistas Independientes (Cuban Institute of Independent Economists) in order to combat disinformation and to inform the world about the situation in Cuba.” But Roque was soon to be punished in 1997, when she was put in prison for three years along with Félix Bonné, René Gómez and Vladimiro Roca. They had all signed a document entitled “La patria es de todos” (The country is for everyone), which dared to criticise an official document published by the Cuban Communist Party. After having served her sentence, Martha Beatriz Roque was sent back to prison in March 2003. She was the only woman in the group of 75 ‘dissidents’ accused of propaganda, rioting and crimes against the state by the Castro regime. This time the sentence was harsher: twenty years. But the wave of international disdain was such that the EU announced sanctions against Havana. In July 2004, following a heart attack, Roque was put under house arrest.

A policeman inside every Cuban

However, her suffering continues: “I am constantly insulted by the regime. My loved ones can never speak to me otherwise they would lose their jobs. On April 25 2006, I was attacked in my own house (see photos).” The Castro regime is highly organised: even in the most isolated or forgotten district, there is a voluntary president of the Comité de defensa de la revolución (Committee for the defence of the revolution) that controls the lives of the inhabitants. "They know everything about you: how much you earn, where you live, who comes to visit you, and now they even come into your house with the excuse of surveying for the fight against mosquitoes. The whole population is involved in this horrible form of control: there is a policeman inside every Cuban," Roque explains.

Meanwhile the waiters and hotel personnel, usually impossible to get hold of, linger at our table asking "Desean algo, señores?" (Would you like something else?). While the filming continues, the atmosphere becomes heavier and the weather more stifling on the strangely deserted patio in the Cuban capital.

‘Apartheid against the Cubans’

When will things change in Cuba? “The Castro regime lives in the future, promising a golden future for the population. But they forget the present situation,” argues Roque. “Certainly there are a few who believe in change and many who want to leave the country. But the day to day situation of Cubans here and now holds no hope of an imminent change.” Do they need to wait for the death of eighty-year-old Castro? “Not necessarily,” argues Roque with determination but little credibility. “Change can take place before Castro’s death because Cubans are suffering under an unbearable regime of apartheid: they are excluded from many places reserved only for tourists (for example the region of Varadero). Also many consumer goods are unaffordable for the ordinary Cuban, for example the average wage is $9 and a pair of shoes cost $20.” But if the media is controlled, how do you influence public opinion? “It is true that the use of internet, for example, is extremely limited. Just think that the journalist Guillermo Fariñas went on a hunger strike on 31st January 2006 (ended on 30th June) simply because the Government would not let him access the internet. No one from the 1994 opposition is allowed to speak to the Cuban people: and yet people spontaneously gather in Malecón (seafront of Havana) to protest against the regime.”

Meanwhile the two ‘tourists’ who were being filmed are now taking numerous photos from the marble staircase that dominates the patio of the hotel.

Europe doesn’t declare its help to the Cuban people

What can other countries do to help Cuba? “Lots - but change should come from within. We don’t want to be another star on the American flag or another member of the European Union.” And yet international support is fundamental: “The USA supports our struggle and sometimes we receive goods from NGOs, but no money. I am not a mercenary (a repeated government accusation against the dissidents). What I do, I do because I want to promote democracy.”

And Europe? “Europe and its official delegation in Havana also help. But its assistance is not made public. Recently I saw the French Ambassador, who along with other European diplomats, had sent me flowers after the attack.” What about the end of the European sanctions against the Cuban government announced in 2005? Here Roque has a clear political message: “I thought that the EU would have been stronger. In effect the Spanish government is pushing for friendship with Havana,” she explains. Time is running out and so is the film. Is Roque worried about the consequences of the interview? “No, I always go out with a spare change of clothes in my bag just in case they arrest me,” she jokes.

Therefore how accidental is it that the author of this article should spend two hours of questioning in customs at the airport?